Cannabis-infused beverages to arrive in Michigan with Happi sparkling water 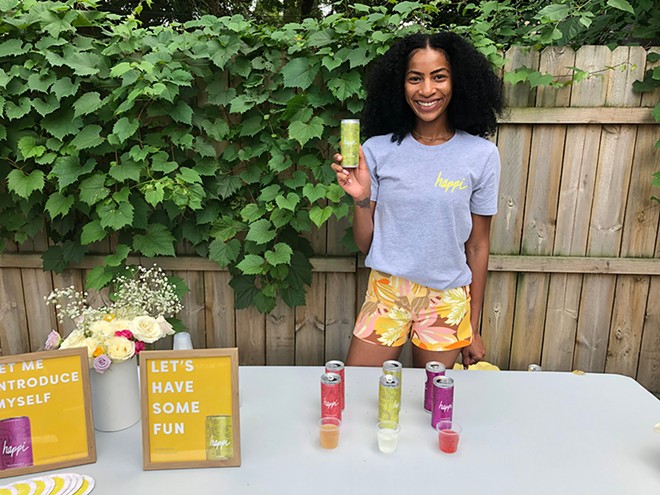 During a recent party in the manicured backyard of the Copper House, a neighborhood event space in Detroit’s Bagley neighborhood, near the Avenue of Fashion, brightly colored cans of a new drink are served alongside charcuterie and fruit. Outside, a retro-style trailer dubbed the “Happi Camper” is parked on the street, emblazoned with the brand’s smiling cartoon faces.

The event is a launch party for Happi, a new cannabis-infused sparkling water that is the first of its kind sold in Michigan. The cans are expected to be available for delivery in the Detroit area via the Lantern delivery service in September, and to be available for purchase at local dispensaries soon after.

The brand is eager to cater to a demographic they say is too often ignored: canna-curious women who are looking for a low-calorie alternative to alcohol. The cans come in three flavors: lemon elderflower, which has 15 calories per can; raspberry honeysuckle, which comes in at 20 calories; and pomegranate hibiscus, which has 25 calories. Each can contains 2.5 mg of THC, the psychoactive component of cannabis that gets your high. It’s a level that the creators say was meant to mimic the effects of a glass of wine — but with no hangovers the next morning.

Happi co-founder Joe Reynolds tells Metro Times that “the original lightbulb moment” came several years ago, when his wife had some friends over, and the discussion turned to the upcoming cannabis legalization efforts in Michigan and Illinois. “The conversation turned to, ‘Well, what if we could drink it?’” Reynolds says. “So I started researching and I really just fell in love with the idea of having a healthy alcohol alternative.”

Reynolds says he spent about six months testing different flavors. “I think there was, like, around 220 different iterations of it,” he says. “When we started, it did not taste very good. It was quite a journey to get to what you’re tasting.” Reynolds says the beverages were made using a “nano-emulsification” technology that breaks the hybrid indica-sativa strains down into smaller molecules that are dispersed equally throughout the liquid.

About a year ago, Reynolds partnered with Lisa Hurwitz, who became Happi’s president. Hurwitz had been working as the chief marketing officer for an Illinois-based cannabis company, following a career in marketing and packaged goods. “I had a background in cannabis for the past few years, and had been really, really passionate about microdosing, and about the female target, feeling that it's very underserved,” Hurwitz says. “Right now in the cannabis category, it's a lot of high-THC flower. And for the ‘canna-curious,’ of which many are women, there weren't a lot of products on the market that felt accessible. So when Joe shared his vision for Happi, I just felt like this was a perfect fit.”

Hurwitz says she learned that two of the top reasons people came into cannabis dispensaries were for help calming anxiety and sleep. “The interesting thing about alcohol is it messes with your sleep,” she says. “And this doesn’t — so you could have a Happi in the evening to wind down, and it won’t have that kind of effect of waking you up in the middle of the night if you’re very sensitive to alcohol. You get a very light buzz, but it also kind of can take the edge off, much like alcohol.”

Michigan nailed down regulations for THC-infused beverages in January, and we can likely expect more of them in dispensaries soon. According to Headset, a company that tracks cannabis sales data, THC-infused beverage sales are up 40.3% from last year.

Infusing cannabis with a beverage means you’ll feel the effects more quickly than you would with infused edibles — in about 12 minutes, as opposed to 30 minutes to an hour for edibles.

“Everybody’s different,” Reynolds says. “Tolerance varies even more than alcohol, but for your average consumer, it should be roughly equivalent to a glass of wine.”

Beyond getting you high, Happi uses all-natural ingredients, including organic fruit. The products are 100% vegan and gluten-free. The flavors are so bold that you cannot taste the THC, unlike many edibles.

“I think with [edibles] is you can often get a bitterness because the way the formulas work is they try to mask the cannabis taste with something bitter, and then you end up with a really bitter-tasting gummy. It's been a long time on the formulation and kind of getting it just right.”

Happi has partnered with Buchanan-based Redbud Roots to produce the drinks. Before founding Happi, Reynolds worked as CEO of a Chicago-based company called Red Frog Events that was involved with food and beverage as well as music, festivals, and other events.

Reynolds says he believes someday soon, you’ll be able to buy and consume Happi at Michigan concerts and music festivals.

Hurwitz says the brand “is meant to be happy and upbeat, and positive, and incredibly inclusive,” she says. The company has partnered with the Black & Brown Cannabis Guild, a social justice advocacy group. All proceeds from Happi’s merch, which includes yellow branded hoodies and T-shirts, benefit the group.

“With the war on drugs, the Black and brown communities have obviously been disproportionately affected,” Hurwitz says. “And so just giving back to the community around cannabis is important.”

The cans are sold in four-packs for about $20. Hurwitz says she’s excited to learn about how their customers drink Happi. “Is it more for a social occasion? Is it more to sort of wind down?” she says. She’s also hopeful that it will help erase stigma against cannabis. “Drinking it makes it really comfortable,” she says. “It’s a good first experience with cannabis, and easy. We’re used to drinking. It’s how we typically socialize. We’ve witnessed a lot of people try cannabis for the first time that aren't even processing that it’s cannabis and not alcohol, because it feels so natural. So for those people out there who are interested in cannabis and trying it for the first time, I think this is probably the single best way to give it a try.”

More information is available at happihourdrink.com.