Crash and burn: The dream factory squeezes out a lemon 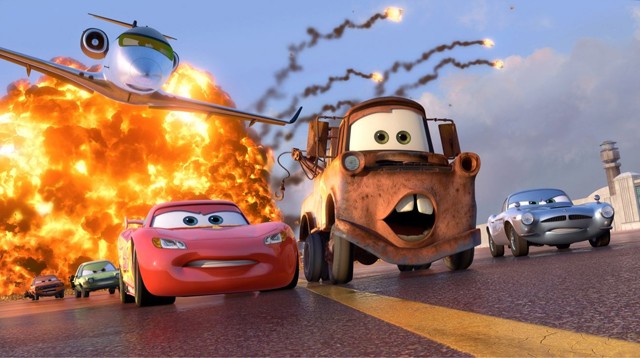 It was bound to happen: the unstoppable hit machine Pixar, the little studio that essentially revolutionized animation and the movie business, has finally produced an outright dud. The first Cars is generally ranked lowest among Pixar’s catalog, yet it moved scads of merchandise, and sadly the follow-up is the company’s first effort that actually feels like an expensive toy commercial. This plastic feeling is heightened through the curious artifice of a fictional character playing an animated character.

“Larry the Cable Guy” is the stage persona adopted by comedian Dan Whitney, one that has turned him into an economic force and a cultural blight. Not since Hee Haw has the South been so successfully slandered; his live action films are beyond abysmal, and his hayseed, grinning rube act is no less offensive or cynical when transposed into cartoon form. A minor player in the first, Mr. Cable Guy leads here as the classic redneck totem: a rusted-out late-model truck, called “Tow” Mater. Star Owen Wilson, as his cocky racecar BBF, Lightning McQueen, gets relegated to the B-plot about a rivalry with a snotty Formula 1 car (John Turturro), a gag pinched from Talladega Nights. Lighting spends the flick globetrotting from one Grand Prix track to the next, oblivious that his good buddy’s caught up in espionage, as a cadre of gas-guzzling junkers conspire to sabotage the great race’s new green energy sponsor. Michael Caine lends a voice as a sleek Brit spy roadster, and adds a bit of class lost from the franchise with the passing of Paul Newman.

Large stretches of the film are flat as the track at Daytona, and just as dull to watch, as the plot laps itself pointlessly.

The best Pixar films, such as Wall-E, are so innately human, that their anthropomorphic critters breath and tingle with a life force so strong that watching them reminds us that we are truly alive.

But the autos in Cars 2 feel like gadgets, colorful contraptions designed to advance a marketing agenda and little more. Though some gearheads may disagree, you just can’t hug an automobile, and all the warm fuzzy trappings feel as unnecessary to the central plot as a spoiler on a minivan.

Certainly pretty to look at, Cars 2 is eye candy and brain rot. In many ways the Pixar brand is a victim of its own success: If it carries that nameplate, we are trained to expect more than the standard, lazy entertainments churned out by lesser competitors. By surrendering to pressures, Pixar proves that even a hot rod can choke and sputter.