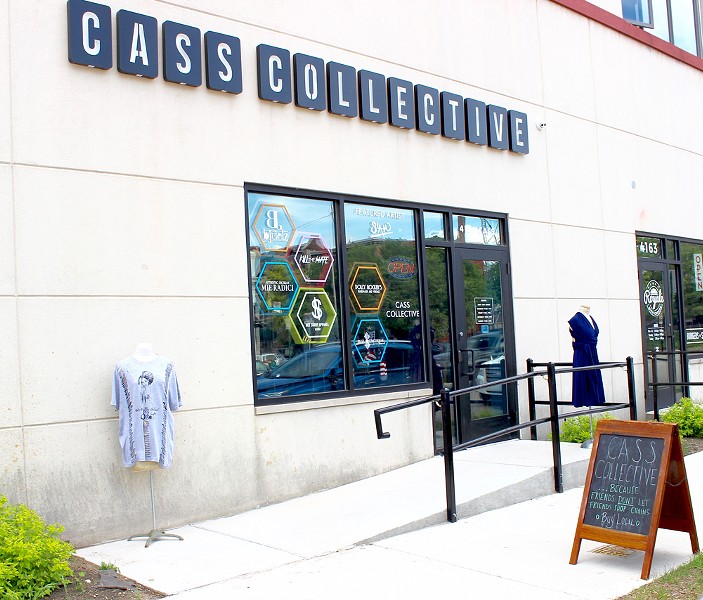 Cara Lundgren has been selling vintage clothing and accessories under the Dolly Rocker's Handmade and Vintage moniker for years. She's vended at street fairs, Rust Belt Market, Eastern Market, and recently a semi-permanent retail pop-up called Joyride. The latter was located in Cass Corridor inside a building that formerly housed Curl Up and Dye salon, and Lundgren was disappointed when the pop-up closed to make way for a larger tenant.

But, she wasn't displaced for long.

Cass Collective, a shared-space retail incubator of sorts, opened up earlier this year and Lundgren jockeyed for a spot to sell her wares inside. Along with five other vendors, she secured herself a flexible under market lease that can last from three months to a year, along with business coaching from TechTown Detroit and Midtown Detroit Inc.

When we stopped by a couple months ago, Lundgren was quick to admit that things had gotten off to a rocky start. The building did not yet have any outdoor signage, making it hard for passersby to identify the space's purpose. Worse yet, the front door was heavy and hard to open, often deterring would-be customers from entering.

Sarah Donnelly is the retail services director at TechTown Detroit and she's partnered with Megan Cowan from MDI to run the space, as well as provide coaching to the businesses that operate therein. She agrees the process has been an ebb and flow, but they're all working together to decide how best to move forward.

The building now has a large sign and things seem to be improving as the weather warms. Next door neighbor Royale With Cheese is fully operational and the two businesses have partnered for an event called Shake and Shop. In an effort to encourage people to spend an afternoon exploring this strip of Cass, they're offering free milkshakes to the first 50 customers to shop at the collective.

"The community has really embraced the collective," Cowan says. "Everyone wants to work together." That attitude could prove fruitful for these vendors as they decide how to move forward once their year at the collective is up.

"The intention is that a tenure at Cass Collective will give you tools to make long-term business decisions," Donnelly says. "It's hopefully providing the neighborhood with a rotation of new businesses and they can help informally decide who is a good fit by patronizing their business."

Among the vendors, Lundgren's business experience is not the norm. The companies are in varying stages of the life cycle, including Not Sorry Apparel which may well be the youngest of the six. Yet, each business is allotted a similar-sized plot and Donnelly and Cowan attend to them with the same level of attention.

The space is small, something like 1,600 square feet, yet they make the most of each inch. A backroom even offers a small art gallery with rotating artist spotlights every three months, plus there is a conference space available for meetings, how-to demonstrations, and special events.

Still, in its first round of vendors, Cass Collective has room to grow and improve — just as each business therein has the opportunity to do so as well. For now, the space adds even more retail value to the already blossoming Midtown shopping district.