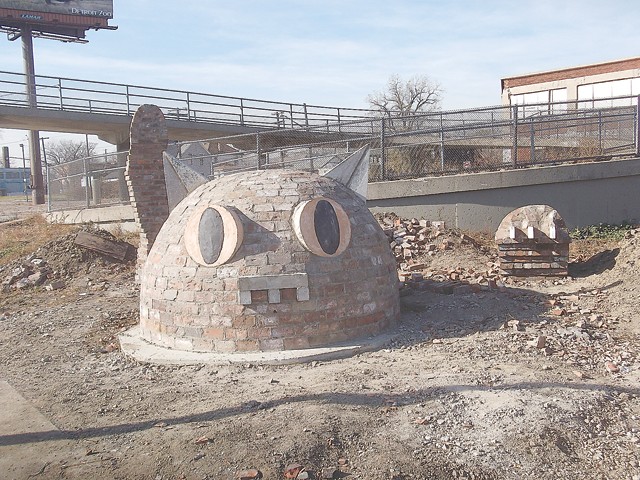 On the southbound service drive of the Fisher Freeway, right where motorists could once catch a glimpse of Tiger Stadium, sits a relatively new landmark. In the shadow of the stark, ramped bridge that curls back to span the expressway, a pair of wide eyes awaits drivers. They are set back in a domed cat head made of brick, its limestone ears up and listening. Nearby, a tail, up but supple, assists the illusion of a cat half submerged in the earth like some ancient statue. A small paw with three sharp-looking limestone nails suggests something darker.

The unusual work, Detroit artist Jerome Ferretti's "Monumental Kitty," was completed last week, helping brighten an area that hasn't been famous for its vibe. Just a few years ago, this marooned strip of land owned by MDOT had rubble and garbage littering it. Though it was covered with asphalt to keep weeds in check, ailanthus trees would still crack through, and the general area was strewn with castoff clothes and soiled mattresses, a place where homeless crept under the bridge to sleep at night.

Then, a few years ago, two local residents, Corktown Residents Council's Jeff DeBruyn and Classic Landscape Design's Jeff Klein, teamed up on an innovative plan known as "Building Bridges." See, the freeway has long separated Corktown from the Briggs neighborhood to the north. Though both locales are making a comeback, the north end of the bridge, a grim stretch of service drive with its concrete ramp, isn't the most inviting place to touch down into any neighborhood. And so the vision is to reclaim the bridge as a connection between the two communities by giving the neglected land an extreme makeover.

Over the last couple years, Klein and DeBruyn cut down the weed trees, hauled away the garbage, and brought together community stakeholders to rip up and cart away five tons of asphalt. A talented landscaper, Klein has designed a whole garden for the space, and has committed thousands of dollars for greenery to be planted this coming spring. Thanks to generous donations from local enterprises — including Slows Bar-B-Q, Nemo's and the Corktown Housing Corporation — the clearance phase of the project is mostly done, with much larger plans in the offing.

Then this spring, Jerry Paffendorf, of Loveland — a fundraising experiment that sells square-inch parcels of Detroit land to "inchvestors" worldwide — came to the Building Bridges project with an offer: We want to fund an art project for you.

That's when Klein, DeBruyn and Paffendorf approached painter and sculptor Ferretti with the possibility of building a sculpture. A Briggs resident himself, Ferretti wanted to take on the job, but noted that the chunk of change they'd raised wasn't enough to make a really impressive, statement-making artwork. Fortunately for us, the gap was filled by a generous, one-time donation from local property owner Konrad Kohl, and a Paffendorf-orchestrated bid for help on Kickstarter, in which 50-odd backers raised more than $1,500, locking in final funding for the project. It's the sort of thing Paffendorf does well, and even though the project is fully funded, it's still worth looking at the innovative video he created. He hails the generous response as an example of what happens when folks feel "social ownership."

After getting final approval from MDOT in June, and after some summertime scheduling delays, Ferretti broke ground on the structure Oct. 15. He says he would've been done sooner, except that setting mortar requires the right kind of weather, and some days were too cold. With the assistance of laborers Don Thibodeaux Jr. and Tina Galli, as well as help from Mary Lorene Carter, Brooks Lumber and, naturally, Klein and DeBruyn, it took form relatively quickly.

What inspired the project? Jerome cites several influences, including Antoni Gaudi's dome designs, how the former home of the Tigers (and, at one time, those other felines, the Lions) is the bridge's raison d'&ecirc;tre, and even the ancient catlike sphinx, which once met travelers by the side of the road.

Ferretti points out: "The sphinx is supposed to be part cat. And the sphinx would wait by the side of the road and would ask you a riddle. You could either turn around and leave, and not try, or try to answer his riddle and go through. But if you tried to answer his riddle, if you didn't get it, he got to eat you! But if you got it, you could go by — to a land of riches and gold."

If it sounds at all like overstatement, there are those who get it. Already, Ferretti says his Monumental Kitty Facebook page is lighting up with photos sent in by people who've visited, or by tribute videos illustrating how people can grasp the inspiration, seeing something that's an unusual mix of menacing and approachable — even if everybody driving by doesn't get it completely.