Longtime Detroit rocker shifts from paisley-pop to something "gnarlier and snarlier." 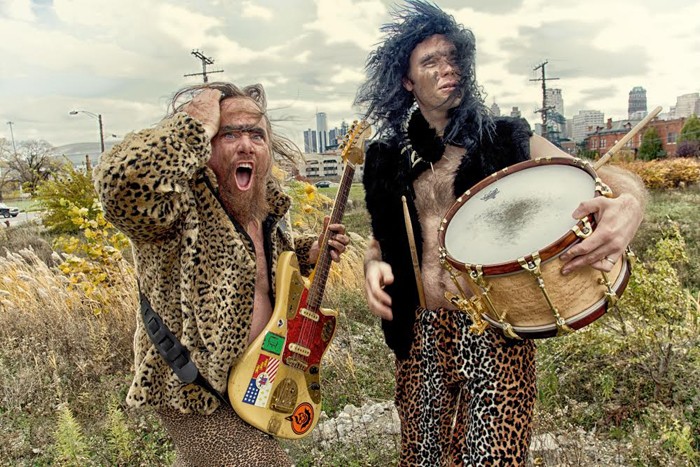 The Caveman can’t see why punk music and dance music can’t go together. The Caveman won’t pay heed to any cliquey spats or separations in the scene. He wants it all lumped in and mixed together. That’s why Caveman can’t wait to play at Kelly’s during the inaugural Hamtramck Music Festival.

For Frank Woodman, a half-naked, dirt-spattered Caveman presentation is actually an evolution. The longtime Detroit resident has shifted from paisley-pop and groovy folk-rock to something “gnarlier and snarlier,” with all the quick, cutting punk-lashing of the Sex Pistols or Dead Kennedys. He realized that in Detroit’s music scene, “you have to bring a little more to the table.”

A ferocious supporter of local music, Woodman’s wild-eyed grin and stringy fire-orange hair are regularly sighted at local concerts, regardless of genre or format. He got into the gigging game late; he was past 40 when he finally formed his family band, Woodman, in 2006, with daughter Hillary on vocals and ukulele and son Derek on guitar. Here, Woodman details how he evolved into his Caveman form and how the respected and radical drummer of cutting-edge rock outfit Bars of Gold (Brandon “Bam Bam” Moss) became his cave-rock cohort.

Metro Times: We’ve seen this Caveman out on the street a lot these past few years? How’d it become a band?

Frank Woodman: Well, it started as a joke. Woodman, the band, wasn’t invited to one of the Fucking Awesome Fests. I saw they still had some of the same bands on that bill, so I said, “Damn it, I’m gonna play it, anyways.” So, George Morris (of the Gypsy Chorus), Mick Bassett and Jesse Shepherd-Bates (of the HandGrenades), we were all playing softball in summer of 2010, and one of them just suggested, out of the blue, “Hey, you should dress up like a caveman when you do it.” So, yeah, I got a loincloth, a battery-powered amp and I played in front of the Magic Stick for all the smokers.

MT: You started bringing this thing out, almost like a party trick, to supplement a show by other bands …

Woodman: Right. I climbed atop the wall of the Lager House’s back patio. I could have got hurt. I played the Beatles’ “Why Don’t We Do It in the Road,” because it sounds dirty. It was great and fun. I’ve played across from the Opera House during Tigers games.

MT: This isn’t typical busking. This is like “letting your freak-flag fly?”

Woodman: Oh, for sure. Brandon enjoys it too. I have a drum machine when he can’t make it. I’m horrible at it, which is perfect for Caveman. I went crazy studying Lo-Fi Bri [of Carjack] working all his samples on his drum machine. I just hit one button and go. But, on a lark, I asked the best drummer in Detroit if he wanted to join and he said yes. Everyone knows [Moss] as this great drummer but he’s equally the entertainer, he’s adventurous, on par with anyone I’ve seen, and he could be a frontman. He loves putting on that wig.

MT: Many who encounter you two wouldn’t appreciate how professional you are in the daylight. You have your shit together. You’re a registered nurse and Brandon’s a teacher. And yet …

Woodman: We’ve got families, full-time jobs, we’re crazy responsible. But this is our chance to be stupid. Dave Taylor from the Amino Acids, he gave me the greatest compliment, and I’ve always loved the Aminos. He said, “You guys are like the Mummies … the stupidest thing I’ve ever seen.” Haha. That’s great. [The Aminos] are damn players, man. To do the theatrical and then the really proficient, it’s a nice combo.

MT: We hear influences from Aminos, or other local punk groups like the Mahonies, the Muldoons or Carjack. But, in past interviews, you’ve name-checked Mazzy Star, the Beatles and Prince.

Woodman: I’m all over the map. My childhood buddies wore denim jackets and listened to Zeppelin, but I was also listening to [Michael Jackson’s] Off the Wall. I’ve always loved dance music. Why can’t you have punk and dance? But, then, that’s also Detroit; there are influences from everywhere, from all these crazy weird bands around here. You interviewed me in 2007, for the family band, and I loved those songs, but it wasn’t enough to do the straight-folk thing. Matt Jones and Misty Lyn Bergeron, I’m a huge fan, but I’ve noticed that whole Ann Arbor-Ypsi folk scene they’re in is starting to do more rock stuff. I feel it should be lumped in and mixed-up.

MT: What are your thoughts on the Hamtramck Music Festival? Have they sufficiently mixed it up?

Woodman: It’s come together so fast and so smooth. Look at that poster over there. [points to a flier on Café 1923’s front door] Wasabi Dream is prog, Protomartyr is psych-rock, Citizen Smile’s pop, Melvin Davis is just classy soul, and then there’s the hometown heroes like the Oscillating Fan Club. You hear these guys organizing it, late night in the bar, you think they might not pull it off. They’re musicians, right? But they’ve got meetings here at Café 1923, I’ve been to some, they’re as organized as librarians, planning this out. It’s going to be great. I just bought a house down the street. I want to make an imprint here, right away. We’re not competing with any other festival; it’s its own thing now.

MT: You just wrapped up in the studio, with Brandon, right?

Woodman: Yeah. With Robbie Buxton [Carlot Sound in Ferndale] — he’s a sweetheart too. Guitars are in-your-face, everything’s in the red. Brandon brings so much personality too, going nuts like a fucking octopus. I went into the studio like a boxer.

MT: Sounds very alive. Does it compare to the onstage energy?

Woodman: Oh, yeah. When Brandon and I are onstage, it’s like a vicious tennis match. We’re trying to hit the ball as hard as we can into each other’s face. It’ll be out in June, but I wanna release it, like, yesterday.