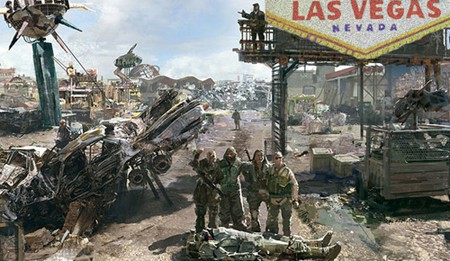 Let's get this out the way: Fallout: New Vegas has more than its fair share of glitches. From strange animation hiccups and frame-rate issues to outright game freezes — polished, this game's not. Yet ... games this glitchy aren't usually this good. Warts and all, the newest entry to the acclaimed Action/RPG Fallout series is actually pretty friggin' awesome.

Two hundred years and change after the bombs drop, life goes on. Well, except for yours, because FNV begins with you getting shot in the face! But you somehow survive, and payback on your would-be killers tops your to-do list. What could be a simple revenge story quickly gets more complicated, because the item you were tasked with delivering at the time of the shooting is really important. So important that you're quickly embroiled in the escalating hostilities between the New California Republic, the Roman-themed Caesar's Legion, and the current head of New Vegas, Mr. House, for control of the Nevada wasteland.

Unlike many locations in the Fallout universe, Vegas wasn't directly hit by nukes, so the devastation and subsequent mutation isn't as extreme as in other places and games. But you're not in paradise either, as you'll see in your travels throughout the Mojave Wasteland. Choice plays a huge part in New Vegas, as each of your game decisions will either endear or alienate you to the many different groups and factions you'll encounter. Half RPG, half first-person shooter, fans of Fallout 3 will feel right at home, as gameplay — including the V.A.T.S targeting system — is largely unchanged. Here's the rub: As mentioned before, this game is really buggy.