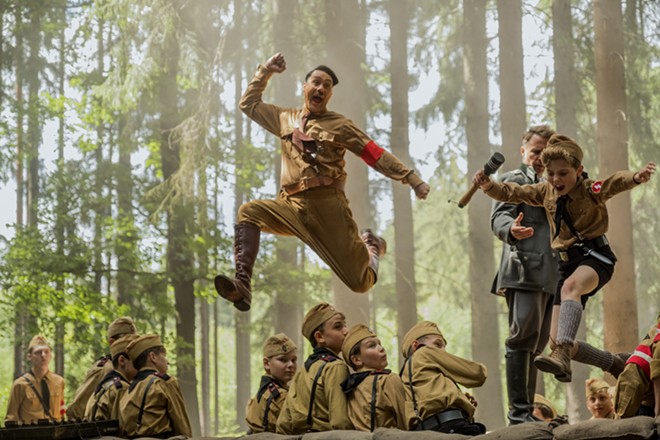 Johannes “Jojo” Betzler (Roman Griffin Davis) is a pretty regular 10-year-old kid circa 1944 Berlin. He loves drawing, bike rides, camping, and most of all, he loves Adolf Hitler. His adoration for the great despot is so complete that the lad has an elaborate fantasy life in which Der Fuhrer (Taika Waititi) is his imaginary best friend and mentor, even if his advice is generally terrible, and he keeps habitually offering the boy cigarettes. Adolf is an unworthy idol, real or imagined, but Jojo is hungry for male approval, as his father has been away on the frontlines for two years and is presumed missing. To provide structure and conform to the National Socialist lifestyle, Jojo is enlisted in the Hitler Youth and sent to a summer training camp under the unwatchful eye of the flamboyant, dangerously cavalier Captain Klenzendorf (Sam Rockwell), a skilled but careless soldier who has been relegated to babysitting “a bunch of tittygrabbers.”

Meanwhile, Jojo’s Mother, Rosie (Scarlett Johansson), tries valiantly to put on a happy face and sing and dance her way through the daily deprivations of wartime, though she’s smiling to hide much more than just her feelings about the Third Reich. After an accident with a hand grenade sends the boy home to recover, out of boredom he stumbles on Mom’s biggest secret: She’s been hiding a Jewish fugitive in her home. The teen girl hidden in the crawl space is Elsa (Thomasin McKenzie), a classmate of Jojo’s deceased sister, and a fiercely intelligent and resourceful survivor. Equally terrified and fascinated by the girl trapped in his wall, Jojo begins interrogating her about the strange and wicked Jewish powers he’s been convinced she possesses, but begins to learn more and more about her history, her personality, and her dreams. Eventually this tentative bond will be vital to their mutual survival in the chaos unfolding all around them.

Casting one of history’s most extreme monsters as a goofy comedic foil is an audacious and intentionally aggressive move, but Jojo Rabbit is not concerned with playing it safe. If the premise seems in bad taste, recall that Mel Brooks made mockery of the Nazis one of his career trademarks 50 years ago, and that same spirit of irreverence is on display here. The absurdist comedy is delivered with all the subtlety of a blitzkrieg assault, as in a scene where an adult straps an explosive to a child’s back and tells him to “go hug an American.” In another recurring bit, a room full of officers individually exchange “Sieg Heil” salutes to a ridiculous length of repetition. Though there are broad, slapstick moments and bursts of sheer silliness, the jokes work best when they’re underplayed, and outrageous lines are almost thrown away. The casual cruelty and the blunt expressions of shockingly horrible ideas is intended to show the banality of evil, and the insanity that often sweeps up regular folks in large-scale atrocities.

Director and star Taika Waititi (Thor: Ragnarok, What We Do in the Shadows) has built a rep on his quirky, deadpan Kiwi indie sensibility, but here he’s cranked the intensity up to eleven. Stylistically, Waititi seems to have borrowed quite a bit from Wes Anderson, echoing Anderson’s fastidiousness, colorful compositions, and attention to period detail, down to every last button on the SS uniforms. This specificity helps ground the goofier moments in reality, and makes the quieter, more emotionally harrowing moments between the laughs more effective. The cast is uniformly great, from the young stars to ace comedy pros like Rebel Wilson and Stephen Merchant, who nail the tricky tone, and Johansson, who gets a plum role and delivers one of her most engaging performances. Jojo Rabbit will be polarizing and won’t work for some, but it rewards the open-minded with belly laughs and a surprisingly rich, emotional experience. The whiplash between gags and earnest drama creates some jarring tonal shifts, but then war doesn’t take the time to ease you into the next scene.

Jojo Rabbit is not showing in any theaters in the area.