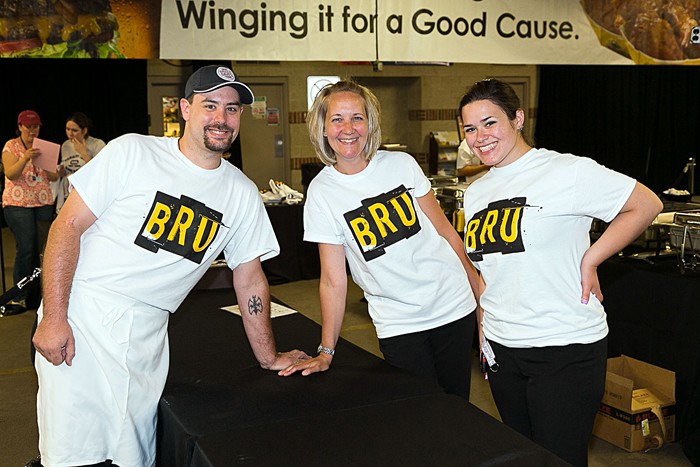 Gone are the days when charity fundraisers were boring, buttoned-up affairs. No longer do you have to spend an evening in formal wear to feel like you’ve made a benevolent impact on your community. These days, a couple of Andrew Jacksons will get you access to a superb but casual event that will provide entertainment as well an altruistic bestowal on a well-deserving organization.

The Children’s Leukemia Foundation of Michigan (CLF) will hold its fourth annual BRU event Saturday, June 14, at the Royal Oak Farmers Market, offering patrons access to samples of menu items from Bagger Dave’s and Buffalo Wild Wings, as well as beer from Michigan’s Bell’s Brewery. We promised some coverage of the event. General admission tickets are $39 and come with 10 tokens, each worth a half-pour of beer, and four tickets for burgers and wings. VIP tickets are $60 and include early entrance to the event, private beer tappings, special food pairings, and a bigger mug, among other things.

This year’s event will also have a new addition to the festivities. The first-ever BRU Pong Tournament will have teams of two entering a single-elimination tournament to represent a patient’s family as selected by the foundation. Entry into the contest costs $5 in addition to the event ticket, the proceeds from which will benefit the charity’s July fundraiser, “The Walk.”

According to CLF president Bill Seklar, the event attracts a younger demographic, offering a fun, relaxed evening that raises awareness for the charity’s mission.

“Fifty-two percent of our patient base is at or below the poverty level,” Seklar says. “This is an important need, and if you’re able to give something, whether that’s being a volunteer, being a sponsor, or buying a ticket, it’s helping those patients and their families.”

The importance of catering to a younger crowd isn’t lost on Seklar, and it’s part of the reason he and the foundation focus on events like BRU, as well as a wine-tasting event called Crush, and the reason they’ll be adding another event this August.

“We’re working with Eastern Market on a new event called Craft,” he says. “ It’s going to feature craft cocktails and cuisine. It will have a real farm-to-table, farm-to-bottle emphasis. We’ll be really focusing on using local products and services.”

Concentrating on the younger crowd helps teach a new generation to enjoy giving both their time and money to charity.

“It’s really important for a nonprofit to sort of indoctrinate young people to want to give back,” Seklar says. “We want to show them the importance of philanthropy and service.”

In this case, charitable service doesn’t call for hard work or sacrifice, but merely $40 and the willingness to have a good time.