Chomsky: Trump is ‘accelerating the race to disaster’ for planet Earth 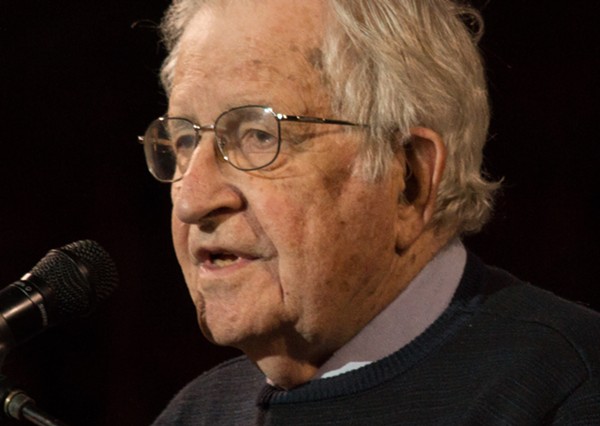 Longtime leftist social critic and political philosopher Noam Chomsky will be in Dearborn Sunday night at UAW Local 600 to give the keynote address at a dinner honoring civil rights legends Buck Davis and Cynthia Heenan.

Metro Times recently caught up with Chomsky, now 89, to discuss the state of the auto industry, the specter of mass transit, and the future of American media in the age of Trump.

Metro Times: What changes have you seen in the U.S. labor market since Trump took office, and is it possible to salvage the labor movement?

Noam Chomsky: It's only been a year, but it's clear enough where things are going. The one major bill that has been passed is accurately described by former World Bank chief economist Joseph Stiglitz as "The U.S. Donor Relief Act of 2017." As he points out, it reduces taxes by tens of thousands of dollars, on average, for the top quintile, and when fully implemented (in 2027) it will increase taxes for most of the rest.

It also creates a huge deficit, which provides the pretext for reducing benefits for the general population, as the Republican leadership has already announced. Other policies are undermining health care, public education, workers rights, and the common good quite generally, while loyally serving the actual constituency of Trump and associates, extreme wealth and the corporate sector.

That's not to mention the most severe threat the administration is posing. While the world is seeking, inadequately to be sure, to address the existential threat of severe global warming — not in the distant future — the Trump administration, virtually alone, is dedicating its efforts to accelerating the race to disaster, quite literally threatening the prospects for decent existence. It's hard to find a historical analogue to policies of such enormity.

There have been periods of American history somewhat like this, though rarely so brazen, and the damage has been overcome. The labor movement has been almost crushed by state-corporate violence and repression in the past, in the 1920s for example, but was resurrected by working people and regained its role in the forefront of social change that benefits the great majority. It can happen again.

Related Noam Chomsky will speak in Dearborn on Sunday

MT: What's your advice to the UAW rank and file in metro Detroit, particularly in suburban Macomb County, which helped deliver Michigan for Trump in 2016?

Chomsky: An urgent task is to rid the country of the current administration before they do still more damage. And I'm sure the UAW rank and file know better than I do how to confront the immediate problems they face. But there are longer-term issues that merit serious attention. To take one, a few years ago the collapsing auto industry was virtually nationalized. Different paths could have been followed. The one that was adopted, without question, was for the public to bail it out and return it to the same class of owners and managers, who would return to producing cars and trucks.

An alternative would've been to turn the industry over to the workforce and community, who would then decide what should be produced, under their own direction: perhaps efficient mass transportation, which the country desperately needs. That's not utopian. The steelworkers of Youngstown, Ohio, came pretty close to achieving such objectives, and there are similar initiatives elsewhere in the industrial areas that have been undermined by state-corporate policy. Such initiatives could lead to a much more just and free society.

MT: Many Michiganders seem willing to sell out their environment for "jobs," often to the detriment of their health. What's the best way to frame the issue of jobs versus pollution?

Chomsky: These need not be alternatives. Some of the fastest growing employment in the country is in industries devoted to reducing not just local pollution, which is serious enough, but the ongoing destruction of the global climate. The renewable energy and conservation industries provide enormous opportunities for job creation across the range of occupations. It's also worth recalling that it's not just "their health," but that of many others, many of them not yet born.

MT: With the publishing industry in a downward spiral, do you think it might someday be feasible to support an independent American media with some type of public financing?

Chomsky: The U.S. is an outlier in this respect. Comparable countries have flourishing public media of high quality that easily compare in independence and integrity with our corporate media system. There's no reason why the U.S. should lag behind.

MT: What do you make of the so-called Bernie wave, which has quadrupled the membership of the Democratic Socialist party, and how can that potential best be harnessed?

Chomsky: What's happened with DSA is important enough, but it goes far beyond. The Sanders campaign in 2016 broke with American political history, dramatically. It has been well-established that campaign spending alone is a very good predictor of electability, hence policy. For the first time, a candidate came very close to victory — and might have achieved it had it not been for machinations of party managers — without support of private wealth or corporate power, and [was] ignored or condemned by virtually the entire media. And Sanders became the most popular political figure in the country by a considerable margin.

It is a striking commentary on the media that his voice is barely heard, and the very significant popular activism inspired by his campaign is scarcely reported. Furthermore, his support was greatest among younger voters, which tells us something about the potential. [There are] no secrets about how to harness the potential, from electoral politics to grass-roots organizing on a host of issues of major significance for our lives and the future. It takes dedicated work, as always.

Noam Chomsky will deliver the keynote address at 5 p.m., Sunday, Feb. 11, at UAW Local 600 as part of the National Lawyers Guild's annual Detroit dinner; 10550 Dix Ave., in Dearborn. Tickets start at $50. Donors of $100 or more to the Detroit NLG Chapter will receive an invitation to an exclusive social reception with Chomsky on Sunday, Feb. 11 at noon. For more information, visit michigannlg.org.