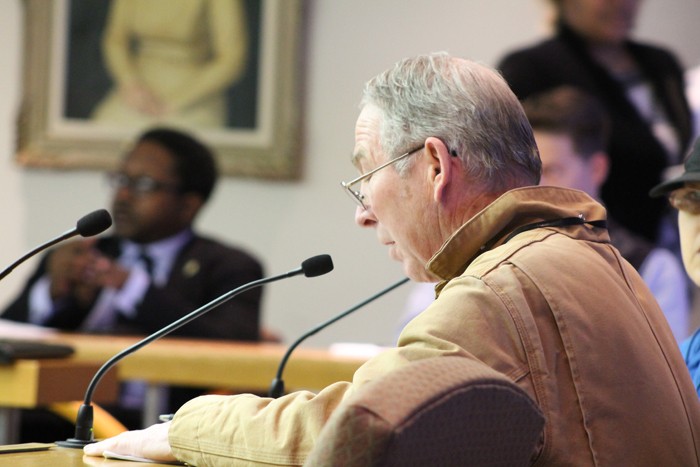 The News Hits crew had no plans to wend its way through the hellish Opening Day crowd Monday, but Detroit City Council had called a special meeting to settle the score on Joe Louis Arena, the last issue needing to be resolved to allow the so-called $650 million catalyst development project including the new Detroit Red Wings arena to move forward. So we dragged ourselves out of bed and braved the raucous scene downtown.

The “catalyst development,” an idea hatched as early as 2012 by Olympia Development of Michigan, the real estate arm of Detroit Red Wings owner Ilitch Holdings Inc., has been a source of contention for some residents and officials since details of the project were unveiled last June. It’s a project crafted by Olympia and Detroit’s Downtown Development Authority that intends to fill a blighted area near downtown Detroit — an aspect some have questioned, as stadia have a mixed history of serving as economic stimulants.

And on Monday, City Council took up a proposal for a new lease of the Joe, the Red Wings’ current home, which would also see the facility demolished six months after the team departs for the new rink up the road.

To increase concerns, the meeting was called on the last possible day before a deadline put forth by the city’s Downtown Development Authority. That was a point raised by Councilwoman Raquel Castañeda-López, who directly asked Olympia representatives Monday if any of the council’s concerns could even be addressed in the lease with an April 1 deadline looming.

The answer from Olympia: a resounding “no.”

What ruffled the feathers of others Monday, in particular Council President Brenda Jones, was the unpleasant appearance of the proposal. Not only are hundreds of millions of public tax dollars being thrown toward pizza mogul Mike Ilitch to construct the Red Wings’ new arena, the billionaire owner of the team was let off the hook to foot the demolition of the Joe.

“This lease is just unconscionable and should not be signed,” said Jon Lauve, of Holly, before the vote. “This is so one-sided, it’s like [Olympia] wrote the whole thing.”

Lauve, in particular, highlighted the city’s Legislative Policy Division report from last week on the deal, which notes that Detroit will generate less revenue under the terms of the proposed deal, when compared to the terms of the old deal that expired in 2010. The city would receive about $17.2 million in consideration from Ilitch in the new lease, the report said, whereas the old deal would’ve netted roughly $20.56 million — about $3.36 million less, or a roughly 12 percent decrease.

For that reason alone, Councilman Scott Benson asked Steven Koppel of Jones Day, the law firm that negotiated the settlement offer with Olympia, why didn’t the city just push for the terms of the old deal?

“The counterparty [Olympia] was not willing to execute a lease that continued along the same terms,” Koppel told the council Monday.

Really? At a time when the bankrupt city is scraping every last dime off the ground to make things happen, this extended lease for the 34-year-old Joe could’ve certainly offered a bigger financial incentive for Detroiters.

Council President Jones pressed further and asked if the city could’ve pushed for more, say, on an increase to the proposed $1 million annual in rent from Olympia.

Koppel said that during negotiations it came up that the $1 million lease payment is equivalent to what the “only other comparable arena” to the Joe — the New York Islanders’ Nassau Coliseum — generates: roughly $1.3 million annually.

Jones didn’t budge: When it comes to Detroit, which is bankrupt, “I just don’t think there is nothing comparable … we’re talking about a playing field that’s different from anybody, anywhere.”

Mike McLauchlan of Ilitch Holdings attempted to allay concerns, saying the settlement allows the city to “move forward” with the downtown “catalyst development” — something this rag previously noted places no fault on Olympia if they default on the obligation to develop an additional $200 million in spinoff development in the 45-block area surrounding the new Red Wings arena.

“Frankly, we felt we went above and beyond our obligations in the interest of moving forward,” McLauchlan said Monday, adding that his company believes the updated Joe lease “was very fair to the city.”

It’s true the city will receive nearly $17 million in consideration in rent, insurance costs, renovations to the Joe’s parking garage, and an amount to settle all outstanding claims with Olympia.

But some councilmembers were concerned over the biggest item of those claims: unpaid cable rights monies that the city’s legislative policy staff previously estimated to be as high as $80 million.

Councilwoman Saunteel Jenkins, who eventually supported the settlement, said, “The expectation was never that we receive $50-$80 million, as has been reported, but certainly, if there are [legal] arguments on both sides … in a settlement, I would imagine … there is some give and take on both sides.”

The new lease suggests a fraction of that amount, about $5.17 million from the Ilitches, to settle that debt. As officials and Jones Day’s Koppel noted, though, that number may have been inflated, and although the city may be legally entitled to more cable fees, Detroit really has no clue how much money that is. To figure that out would require lengthy litigation that might not end in the city’s favor.

The council eventually approved the five-year lease in a narrow 5-4 vote. Whether the city could’ve gained more out of the deal is, now, essentially a moot point.

Before the vote, Council President Pro Tem George Cushingberry Jr. offered a suggestion to seemingly further cool the concerns over revenue, contending the income taxes generated by construction of the new arena would likely, at least, generate $4 million in revenue — a number that would cover the hypothetical revenue decrease posed by the Legislative Policy Division in its report. (It’s worth mentioning that Olympia suggests the construction of the “catalyst development” will generate 5,500 jobs alone. But at this point, it’s entirely unclear if those jobs will pay well, and, more so, whether that’s an exaggerated estimate.)

Even if it was only a hypothetical situation posed by the Legislative Policy Division, it’s worth mentioning how strapped for cash the city remains in some regards: As we reported last week, Mayor Mike Duggan’s team recently applied for a grant from the Knight Foundation to win funds for a new city website.

So it’s safe to say that extra $3.36 million could’ve helped, especially considering the city had to approve a plan to expand the DDA’s footprint to accommodate the new Red Wings arena, diverting potential significant taxable revenue for the entire city’s day-to-day operations.

Perhaps these are points that can be made when Detroit’s new arena is made obsolete and a proposal for the next one is on the table.

The court docket for Detroit’s historic bankruptcy case is filled with a never-ending stream of legalese and detailed plans that intend to reshape the fundamental structure of the city.

For city retirees, the impact of those plans may be immense: Under Detroit Emergency Manager Kevyn Orr’s currently proposed bankruptcy-exit plan, police and fire employees could lose as much as 10 percent of their monthly pension checks; for general employees, the loss could be as high as 34 percent.

Those who could be affected by such cuts have a unique opportunity in Detroit’s bankruptcy case to file a legal objection to Orr’s plan. And they’re making use of the chance to speak their minds; hundreds of those objections are wedged between filings from Detroit’s counsel, attorneys representing creditors, orders from the judge overseeing the case, and more.

Some are brief, handwritten calls for help that suggest Orr’s team hasn’t offered a clear resolution for the layman to understand; others deliver blow-by-blow heartbreaking stories about how such cuts could send them into poverty. Considering the objections are public documents for anyone to see, we figured, instead of letting them sit at the bottom of a court docket, it’d be worth offering them an additional platform to let their stories be known. We’ll do our best to publish a handful every Tuesday on our website. For now, here are a couple of examples of what to expect: It is simply a genuine snapshot of just how much of an impact Detroit’s bankruptcy is having.