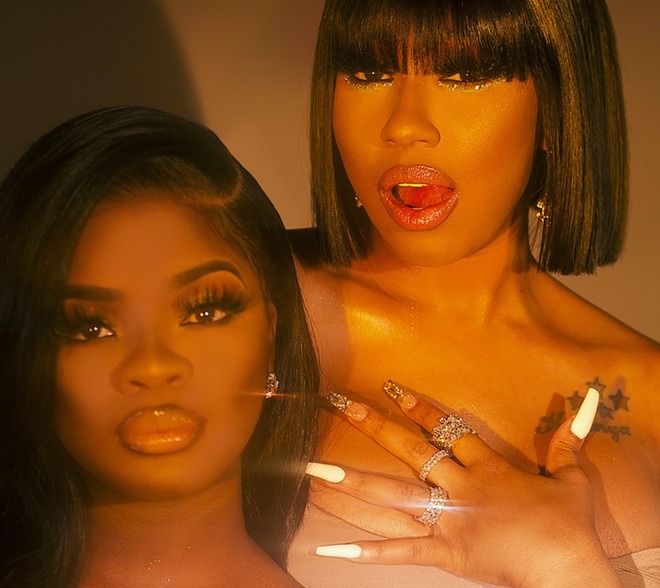 The impact of the 1619 Project: In conversation with Nikole Hannah-Jones

Wednesday, 9/22: Since releasing the "1619 Project" into the world — a sprawling package of stories that posits that the true beginning of United States history starts when the first African slaves arrived in Virginia 400 years ago — Pulitzer Prize-winning New York Times reporter Nikole Hannah-Jones has sparked a profound dialogue on race and how we interact with history. Named as one of Time Magazine's 100 most influential people of 2021 (they describe the 45-year-old as "a journalist who catalyzes the debate over how a nation teaches its history"), Hannah-Jones will visit Ann Arbor's Rackham Auditorium for a discussion on the impact of the "1619 Project" in conjunction with Ann Arbor District Library's current exhibit, "An Exhibit of the 1619 Project," which features some of project's original articles, poems, short stories, and images. Also coming up on Hannah-Jones radar, the MacArthur Genius will soon cross "children's author" off her list of accomplishments. Born on the Water, which will be released on Nov. 16, borrows from the 1619 Project and aims to reframe how Black children are taught their history. The lyrical picture book is the result of Hannah-Jones' partnership with Newbery honor-winning writer Renée Watson. —Jerilyn Jordan

Friday, 9/24: Dancing with a lamp never looked so good. Arguably the greatest concert film ever made, and, by some analysis, what could serve as the blueprint for the anti-concert concert film, Jonathan Demme's Stop Making Sense is 88 minutes of near perfection. Demme filmed the David Byrne-fronted Talking Heads over a four-night run in Hollywood in support of the band's stunning fifth record, Speaking in Tongues, resulting in a once in a lifetime audio-visual experience with elegantly sparse staging, emotive lighting, Byrne's signature noodle-y physicality, and, of course, the iconic "big suit." The screening is a great opportunity for anyone who may have missed out on Byrne's American Utopia tour in which the 69-year-old brought to Detroit's Fox Theatre in 2018 and will return to Broadway this year. —Jerilyn Jordan

Saturday, 9/25: The city is on lock, y'all. Or at least it was in 2020, which is the same year Yung Miami and JT who perform in your face hip-hop as City Girls released their second full length City on Lock. For the uninitiated, City Girls courted controversy shortly after dropping their debut single "Fuck Dat Nigga" in 2017, when JT was arrested on credit card charges and began serving out a 24-month sentence the day after City Girls' feature (which was watered down) on Drake's 2018 banger "In My Feelings" was released. In other words, just as they were ascending, they were forced to take a break. But Yung Miami held it down, despite being targeted in a drive-by shooting, as their track "Twerk feat. Cardi B." cracked the charts. JT was released in October 2019, dropped a "First Day Out" freestyle that day, and, shortly after, gave birth to her daughter before the duo went to work on the unapologetic party-jam packed, humor-laced, and adversity-facing City on Lock, which was ultimately recorded while the two were in different states. —Jerilyn Jordan

Saturday, 9/25: When was the last time you did something for 12 hours straight without pause? And no, sleep doesn't count. Well, if you can hang — and even if you can't — there's something blissful happening at the historic Michigan Building and the first performance to take place in the theater turned parking garage in 50 years. As part of Detroit's Month of Design, Icelandic multi-disciplinary artist Ragnar Kjartansson's BLISS will make its Detroit debut. A recreation of Kjartansson's 2020 performance is a bit of a mind fjandinn. For BLISS, Kjartansson borrows from the finale of Mozart's Marriage of Figaro (spoiler alert: Count Almaviva pleads for the Countess' forgiveness and ultimately earns it) and replays the final three minutes of the beloved opera with the same cast and orchestra for 12 hours without stopping. The result? "An eternal looped moment of repentance and grace with some of the most heavenly music Mozart composed." Described as transcendent and a staggering artistic achievement, BLISS champions the healing power of music. We're going to need a bigger cup of coffee.—Jerilyn Jordan

Event runs from noon-midnight at the Michigan Building, 220 Bagley St., Detroit; designcore.org. Tickets are pay what you can with a suggested admission price of $20. Tickets are free to use anytime during the 12-hour performance.

Sunday, 9/26: Throughout his glittering, scarf-heavy, brooch-wearing, 23-year-long career, "Gay Messiah" and the rebel prince of "popra" Rufus Wainwright has rarely followed the rules. Whether rules of convention, fashion, or neat and tidy public perception, Wainwright explores not only breaking rules, but unfollowing them on 2020's aptly titled Unfollow the Rules. The 48-year-old progeny of folk royalty Loudon Wainwright III and the late Kate McGarrigle has been revered as the rebel prince of "popera," notably carving out a single throne in a velvet-curtained, gold-leafed corner of the adult-contemporary world. Sharp and shimmering, Wainwright's lush pop sensibilities and, at times, uncomfortably forthcoming but incredibly endearing approach to songwriting and self-excavation. On Unfollow the Rules, Wainwright's ninth studio record is as moody, opulent, sardonic, and, paradoxically joy-steeped as anything the crooner has unleashed into the world, but this time, Wainwright isn't pushing back against anything, including himself. Instead, the record suggests a kimono-clad Wainwright, lounging on an antique fainting couch, taking stock of his life, like Dorothy skipping along the yellow brick road or passing out in the poppy field. Wainwright will be joined by Swedish folk singer-songwriter José González. —Jerilyn Jordan

Wednesday, 9/29: Hailed as the Chet Baker of soul, Texas-native and purveyor of smooth, emotive, and — if we're being honest — downright sensual music, Leon Bridges is golden. On his latest record, Gold-Diggers Sound, Bridges let it all hang out ... emotionally speaking. "I was just able to be myself and let go of any inhibitions and create without any boundaries," he said of the writing and recording process, which took place at a bar/hotel/recording studio called Gold-Diggers in East Hollywood. Though he set out to spice up the creative process, the, uh, music, is still v steamy. On "Why Don't You Touch Me" Bridges begs to be desired (as if that's hard to do), and on "Magnolias" the 32-year-old offers his shirt to his lover and asks her to tell him what she wants to feel spoiled — and, yeah, the song insinuates some good old-fashioned beach banging. To take things up a notch, on "Sho Nuff" Bridges, once again, pleads on his knees, this time for instructions on how to please his lover. We have some suggestions. Texas-based soul singer-songwriter Abraham Alexander is also on the bill. —Jerilyn Jordan