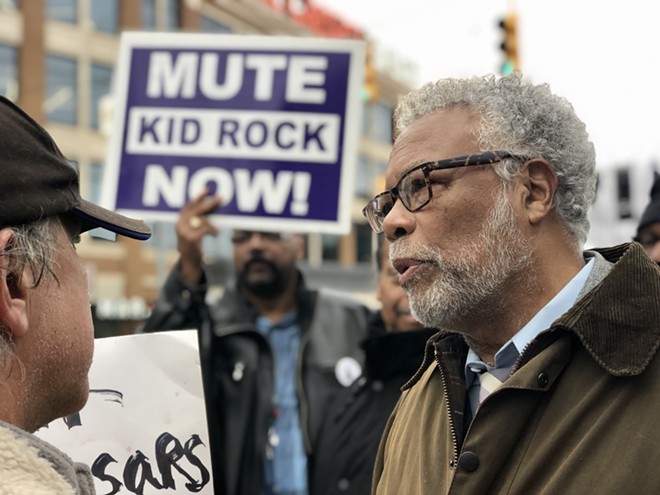 That was the message from civil rights activists who gathered across the street from Kid Rock's Made in Detroit restaurant at noon Wednesday, a few hours after Ilitch Holdings, which runs Detroit's Little Caesars Arena, announced it was not renewing its lease with the alt-right rocker.

Ilitch Holdings' decision to part ways with Kid Rock came less than a week after the Trump-supporting, hate-spewing musician went on a drunken tirade directed at Oprah Winfrey while claiming he was not racist.

"Oprah does not deserve some low-life, racist punk rock star to make these types of statements toward her and this community," Rev. Charles Williams, president of NAN's Michigan chapter, told reporters. "That's why we say good riddance. We hope he takes this opportunity to learn his lesson."

A lone white heckler called out "bullshit" when the activist group called Kid Rock a racist. He refused to identify himself but continued to disrupt the activists who were speaking.

Sam Riddle, political director of NAN's Michigan chapter, called out the Ilitch family for allowing Kid Rock, a politically divisive figure, to open a restaurant there in the taxpayer-subsidized arena in the first place. In January, a Black former bartender at the restaurant alleged in a lawsuit that she was fired by the management for wearing her hair in an afro.

While activists spoke out about Kid Rock, the bare-chested musician posted a photo of himself extending his middle fingers on Facebook.

"All this BS going on has just go (sic) my blood pumpin’ and is only more songwriting fuel for a new record and tour in 2021," he wrote. "I am beholden to no one, no corporate sponsors, no label and I am gonna go the fuck off!
You haters better be shaking in your boots."