Scarf it down in true finger-lickin' fashion 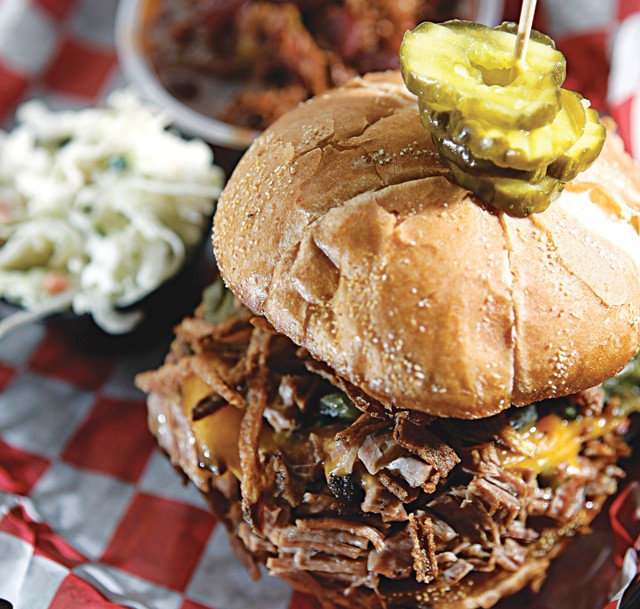 Ten years ago, suburban barbecue was more or less reserved for backyard grills. Today, the options are widespread, and among the newest is Clinton Township's Smokin' BBQ, a smallish standalone restaurant that starts the strip of storefronts lining Gratiot just north of 16 Mile Road.

There's no mistaking where one is at upon entering. Every inch of the interior is branded — from the applied flame graphics adorning the tops of the windows and the logos on the napkin holders to the paint colors and the sauce bottles. And a pile of assorted hardwoods is stacked on shelves next to the soda fountain.

If the decor or the drive-through window hints that Smokin' BBQ is a chain, it's because expanding from this first location is an eventual goal of the restaurant's ownership. And it's clear — whether picking an order up in one's car or taking a seat in the dining room — that rapid service is among their chief aims. Food ordered at the counter takes fewer than five minutes to arrive.

All meals for dining-in are served on trays, in some cases quite literally. A full slab of ribs is placed uncut, for example, on a plastic platter lined with checkered paper for $19.99 (or $22.99 with two sides). Combo platters, sandwiches and sides often get their own containers, a mix of sturdy reusable plastic trays and disposable take-out containers.

Questionable eco-hostility aside, one will inevitably derive a bit of frustration from the plasticware upon ordering some ribs: The flimsy knife isn't really up to the challenge of separating each rib.

More suitable for scarfing down in true finger-licking fashion are the sandwiches. A burger, catfish or any of the smoked meats are available between bread, but consider one of their named specialties, each accompanied with slaw and a side for $8.99. While the Memphis Wrap is a somewhat atypical juxtaposition of low-carb bread and smoked pork or chicken, the Boss Hog (tender pulled pork layered with melted cheese and slaw) and the Pretty Bird (stacked particularly high with surprisingly moist pulled chicken, Havarti cheese, and cooked onions and peppers) are more on point.

From the gentle application of breading atop the mac 'n' cheese to the chunks of shredded meat in the collard greens, the sides show a much appreciated hand-made touch. That is not to say, however, that they're universally delicious. The sweet potato fries, for example, have a nice texture with a crispy exterior and soft center but lack much flavor. Similarly, the mac is a bit gummy in terms of texture, and the flavor of the cheese is rather unremarkable. However, the collards — ostensibly cooked in a meat-based broth — are both tender and quite flavorful. Other options for side dishes include beans, fries, chili and cornbread, the latter of which always accompanies combo meals and rib dinners.

Essentially requisite to the barbecue aesthetic are heaping portion sizes, and Smokin' BBQ is no exception. Even skipping past the take-out "catering" menu with feasts for as many as eight people ($49.99) or the option for 30 chicken wings ($24.99 with sides), there are plenty of waistband-splitting options available.

Smokin' BBQ offers both St. Louis-style spare ribs and baby backs in quantities of 3, 6 and 12. According to the menu, the rub applied to the ribs is a "savory" mix, but the ribs are quite sweet even without the addition of sauce. The long, sensitive time in the smoker makes the preparation of ribs a touchy, error-prone process, so it's not uncommon for things to occasionally dry out, as happened with our spare ribs on one recent visit.

Following the Memphis tradition of selling rib tips, the meaty undersides removed while trimming a rack are also available starting at $7.49 a pound. Especially hungry? All the smoked meats — brisket, chicken, pork — are also available by the pound from $9.99 to $12.99.

For a broad sampling of their offerings, try a Combo that consists of two meats ($14.99) or three meats ($18.99) with cornbread and two sides. Or consider the St. Louis rib combo with a choice of smoked meat, catfish or shrimp.

Our party did have one particular pun-filled bone to pick with one of Smokin' BBQ's claims: that their sauces are "what make Smokin' BarBQ so amazing." While some of the drier pieces of brisket did benefit from added moisture, most of the sauces, served at the table in large, clearly labeled squeeze bottles, were cloyingly sweet or somewhat bland.

Among the five options, the Whiskey Jack stands out as the most well-balanced — a nicely sweet, all-purpose sauce. Conversely, the Memphis Love seems to have neither traditional tomato nor vinegar base and is exceedingly sugary. The signage recommends it for dipping sweet potato fries, but the result is more like saccharine dessert than a side.

Still, the food is up quick, and the meat has the undeniable flavor of real hardwood smoke. For a fast bite on the east side — and a big bite at that — check out Smokin' BBQ.