What happens when Toxic Avenger fans grow up? 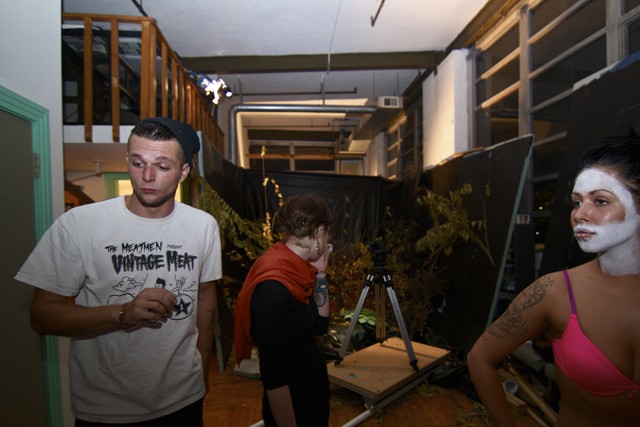 Viewer discretion advised, indeed. Client discretion advised as well. Colin Duerr says, essentially, that he's "not for hire." Give him the chance to direct your band's music video, but don't be dismayed when the concepts come off edgy (or "excessive or crazy" or even "... creepy as hell"). Duerr knows true edginess is attained only when the director dares to cross over the edge (or at least dangle at the precipice).

"I wanna see myself in this," he says.

So seeing these nude ladies, elaborately painted-up as seductresses, entranced and snarling, eating worms and clawing dagger-fingers at the screen while splaying their supernatural corpora throughout the new music video for post-funk hip-hop duo Passalacqua's "Sirens," is just a part of experiencing Duerr's vision.

Now he has moved on to music videos: Passalacqua's sublimely nightmarish "Sirens" debuts online on Halloween, (viewable on Duerr's Tumblr site and the band's main site). In mid-November, Duerr debuts another music video for a song by indie-rock quartet Fawn (featuring "giant kitten-robots saving Detroit from a giant witch attacking us from the West").

The 26-year-old alum of the Motion Picture Institute of Michigan had edginess ingrained on him, growing up idolizing trash-art icons like the Garbage Pail Kids.

For his 7th birthday, Duerr asked for a mop because he idolized the Toxic Avenger. When he was barely 10, his parents sat him down to watch Pulp Fiction, cautioning, of course, that "everyone in this movie is very bad ... all-baaad people. ..."

"It was because they knew how much I was into movies," said Duerr.

Fellini's 8 1/2, Stanley Kubrick and The Ren & Stimpy show fascinated 13-year-old Duerr. "Before I knew I wanted to be a filmmaker, I wanted to grow up to be a mad scientist." He realized that's really what his directorial idols achieved: living out their own mad-scientist fantasy on film.

Duerr admits it's selfish, but it's got to be his own idea, however extreme, for him to fully care about a project. Bands can shoot him down if he goes too far, (like, say, verging on pornography, drug-trips or freaky murder scenes), but he's still gonna push it. "Excessive evocative blitzes" help inscribe his cinematic signature.

"I don't care about money; I just care about making really good music videos," Duerr says. "It's the best way for me to be myself. I always go over my own budget. I have a day job, and extra money is nice, but I'll get a check and blow it in a weekend for these videos, going straight to the makeup store, then to Home Depot, buying supplies, some spray-paint, some paper."

Let Duerr be himself and you get fantastic, horrific, hallucinogenic imagery. Duerr, shrugging, says, "That's just what I've done since I was a little kid."

So for "Sirens," take Fellini's quirky-baroque styling and twist it up with proto-surrealist color-exploders like Hieronymus Bosch. Then paint-up 13 nearly naked women in headdresses, beaks and freaky flytraps and set it to Passalacqua's nocturnal groove-ballad.

Passalacqua's Bryan Lackner (aka Mister) says Duerr, "his girlfriend Dana [Fornaresio], John Panich, Kristi Byrnes, all of the girls in the video, put in an unfathomable amount of work." The best word Mister could summon for "Sirens" was "otherworldly," and a Halloween premiere is all too fitting.

Mister took to Twitter, predicting the video would both turn people on and make them uncomfortable. "Colin agreed," says Mister. "[Duerr] told me: 'If it's only just sexy, then who cares?' Colin wanted to make something bigger."

And Fawn's video, Duerr said, might actually be "crazier." Prepare yourself for the giant kitten robots, the mad scientist's latest experiment.