Confessions of a strip club DJ

With lust in the air, we talk to two of the guys who help the girls make it rain 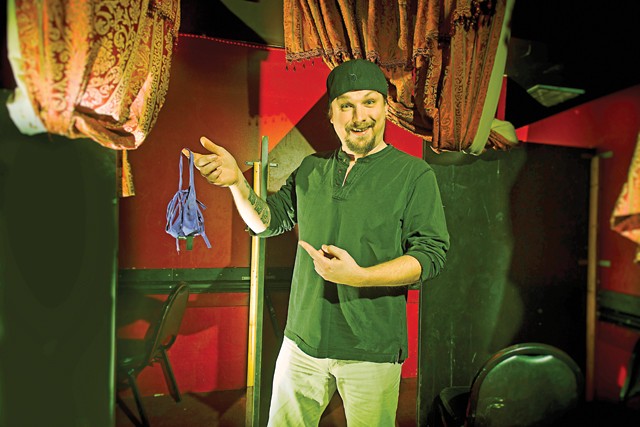 Have you ever sat in a strip club and spent a minute or two looking at the DJ? Probably not; let’s face it, there’s boobage to be seen and that guy sitting alone in a booth isn’t going to be as compelling. But if you stop and think about it for a minute, this is a gig that involves getting paid to sit in a strip club and spin records. For the average musician, surely this is a dream job, right? Well, sometimes, according the Chris Polite of funk rockers the Infatuations and Franklin Hannah of hard rockers A.S.S. (also featuring Brian Thomas of Halloween).

As with any job (kinda), it’s not all Motley Crue and knockers. Sometimes, it’s difficult clients, difficult girls, and long hours. Still, they have some stories to tell …

Metro Times: How long have you been DJ-ing in strip clubs?

MT: Where do you work now, and where, if anywhere, have you worked before?

Polite: I have worked at a few clubs over the years. I am currently at Subi’s Place in Southgate. It’s a great club with great owners.

Hannah: John’s Hot Spot in Ypsilanti. I have also worked at Subi’s in Southgate.

MT: What kind of music goes down best with the customers? Has that changed since you’ve been doing it?

Polite: I would say a good, happy medium is top 40 classic rock. It doesn’t matter how many times you’ve heard “You Shook Me All Night Long” (AC/DC) or “Girls Girls Girls” (Mötley Crüe) in a strip club, they always seem to be the right song that should be playing.

Hannah: It’s a mix. I try to play a little of everything but you will never make everyone happy.

Polite: Ha! That’s a good question. I guess a cliché, or creepy answer, would be that I get paid to hang out with naked women, which might have been my answer when I was 20. What I really enjoy nowadays about working in the industry is all the different kind of people I meet, from pro athletes and businessmen to that socially awkward guy that finally feels comfortable around girls. The dancers are even more interesting. Every girl has a story about why she is dancing. Some are freaks who have nothing better to do and some are really caught up in the lifestyle. Overall, it is a great DJ job that pays well and becomes more fun the less judgmental you are.

Hannah: All my friends think this is the dream job, but they haven’t had to ever deal with these types of personalities, I assure you.

MT: Ever had a funny mishap?

Polite: One time a girl was probably a little too drunk and she wanted to dance to some “Smooth Criminal.” When it was time for her to go on stage, she all of a sudden had this broke-down MJ outfit on. Next thing you know, she does a jump for the pole and completely misses it. She went flying off the stage and crashed hard. She immediately got back on stage like nothing happened, looking disheveled, with her hat missing. Quite possibly one of the funniest things I have ever seen. I said a few remarks over the mic and was called insensitive for the rest of the night but, whatever, it was funny and she was OK.

Hannah: Only on purpose. If you get a particularly difficult girl or one who doesn’t tip, then you can have some fun with the music. For example, no one wants to dance to Kenny Loggins.

MT: Are people actually listening to you while they drool? Could you basically play anything?

Polite: It depends on the crowd. The difference between playing music in a strip club and other DJ gigs I have had is that in a strip club the people treat it like some sort of fantasyland. Most of the time, all the attention is on the girls. Music is secondary but important. As a DJ in a traditional club, you might DJ for three hours tops probably sharing sets. In a strip club you’re DJing seven or eight hours straight by yourself, so the dynamics of controlling the crowd are different.

Hannah: Some customers listen, but, for the most part, they just wanna see boobs.

MT: Do you create different moods depending on the time of day or type of set?

Polite: Absolutely. Once again, it depends on the crowd. If there are 30 guys in their 40s, then I stick with the classic rock type hits mixing it with a little top 40. When the crowd is younger, I stay away from the extremes like gangster rap or death metal and keep it between 120-130 bpm.  Once in a while, there is someone who feels the need to show the world how tough or cool they are or how much money they have. The tension can cut through a club like a knife so I just put on a few weird or slow songs that make people think, “What the fuck is he playing?”. Music is powerful; you can change the mood in any direction you want as a DJ as long as you can read people a little.

Hannah: Sometimes. It depends on which shift you work.

MT: Give me a play-by-play of a typical evening?

Polite: Get there early, put the girls in an order that visually makes sense for the stage show and get ready to party. Ha.

Hannah: Well, I work days so it’s not too eventful. Push the buttons, collect the money, and get the hell out.

MT: Do people give you requests?

Polite: All the time. Dancers love picking their music. The worst is when someone wants some sad love song that kills the mood. I usually convince them that is a bad idea. My favorite is when a local band or artist comes in with their CD and asks me to play it. As soon as their song comes over the speakers you can see how excited they are. It’s a small reward for musicians, but seems to mean the world to them. As a recording artist myself, I will never forget the first time I heard one of my songs on the radio, or in the strip club!

Hannah: I get requests all the time, which is fun because you can only hear the same 125 songs a day so long until you go mad.

MT: What is the craziest thing you’ve seen.

Polite: Where do I start? I will never forget this one day that I happened to be walking by the VIP room and I heard a man scream, or a yelp of some sort. I stopped in my tracks and looked in there and this guy was on his knees with a dancer putting her cigarette out in his mouth. What made it even more strange was then she booted him in the ass and hit him in his back with a belt for falling down. That is the moment when I learned how much of a freak I wasn’t.

Hannah: I saw two 90-pound girls fight like UFC fighters in the parking lot once. They went forever and it wasn’t girly in the least. Two days later, they were best friends.

MT: Ever dated a stripper?

Polite: I plead the Fifth!

Hannah: I’ve been a musician for over 20 years and learned a long time ago not to get mixed up with them. More trouble than it’s worth, believe me.

MT: Tell me something you wished you were allowed to do at work but can’t.

Polite: Tell all the creeps that come in and judge people to get a life. They sometimes spend a lot of money and think it gives them a free pass to talk to people like shit or give out some half-ass advice on how to better your life. I can understand having certain beliefs, but if you are going to go out of your way to come to the club, quit being a buzzkill and learn how to party.

Hannah: I really wish I had more authority. There are a few things I’d change with regards to dancer etiquette for sure.