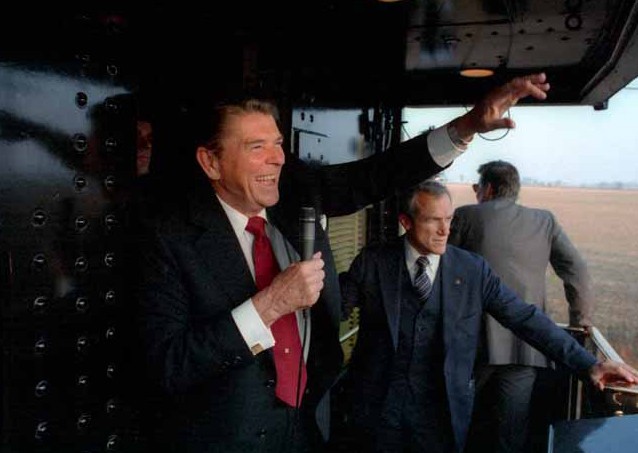 There's a fascinating way in which the Republican National Convention was much like one of the old party congresses of the Communist Party of the Soviet Union.

The Soviet mythology was that there had been one great, true, infallible and morally incorruptible leader — Vladimir Ilyich Lenin.

But alas, Lenin's legacy had been tarnished since by a line of imperfect and criminal successors, such as Joe Stalin. Fortunately, delegates would be told, things were now being put to rights under the present leader, Comrade (fill-in-the-blank).

This year's Republican National Convention was very much like that. What amuses me is that they don't mention Abraham Lincoln much anymore. That's not surprising, given that the old bugger was the first to make it harder to suppress the minority vote.

No, today's GOP traces its history only to Ronald Reagan. Make that an embalmed and Tea Party-ized image of Reagan that bears about as much resemblance to the real man as to Lenin's embalmed and mummified corpse in that glass box in Red Square.

What about those Republican presidents and nominees who came after Reagan? They seem to have been as ruthlessly purged from the GOP mythology as Trotsky was from Stalin's birthday parties. Didn't see George W. Bush praising Mitt Romney, didja?

How about Bush One? Bob Dole? What about the 120 years the GOP was fielding candidates before Reagan? Forget about 'em.

Didn't see any mention of Richard Nixon, the man they nominated five times for president or vice-president, did you?

They are nonpersons, comrades, and hold those Romney signs higher!

Besides the omissions, there were plenty of lies. Truth doesn't matter to today's Republicans, as was best expressed by Lyin' Paul Ryan, their vice-presidential candidate. He has been caught lying about everything from his time running a marathon (he shaved more than an hour off) to his devotion to nutball right-wing "objectivist" writer Ayn Rand. As for what his policies would do to people ...

Nevertheless, I still fully expected the GOP to have a better national convention than the Democrats. It's always easier to rally the troops and attack the enemy when you've been out of power.

Defending a record is far more difficult. Nevertheless, to my surprise, I was totally wrong. Even Republicans know that the Democrats looked far, far better to whatever audience there was.

True, Mitt Romney's speech was the best performance by a robot I think I've ever seen. Ann Romney made an — at times — touching speech about the difficulties of being a rich housewife and mom, though she also sometimes sounded like a high school cheerleader reading lines someone had written for her.

Paul Ryan's rant was, as they say, much better in the original German. The best speech at the GOP convention was that of New Jersey Gov. Chris Christie, who is plainly running in 2016.

Then it was the Democrats' turn. Vice President Joe Biden hammered away at the GOP opposition to saving the auto industry, in a remarkably good speech. The best speech was Bill Clinton's, though I was more blown away by Michelle Obama, who was so dazzling she made poor Ann Romney look like something out of a long-ago era.

I wondered what the people who were wowed by Jackie Kennedy back in 1960 would have thought if they could have seen the power, beauty and brains of our current First Lady, who never bothered to mention that she is a brilliant Harvard-trained lawyer.

Male Democrats tend to be married to women; Republicans have wives. The biggest contrast came whenever the cameras showed the delegates. The Republicans looked as white as an Elks' Club convention in Iowa in 1955. The Democrats were incredibly diverse.

The president himself, normally seen as a mesmerizing speaker, gave a better-than-average speech, which was unfortunately overshadowed by the brilliant rhetoric of the glamour twins.

But Barack Obama did have the most sensible line uttered by anybody at either convention: "The truth is, it will take more than a few years for us to solve challenges that have built up over decades."

Clinton foreshadowed that, telling delegates that "no president, not me, not any of my predecessors," could have, in a mere four years, repaired all the damage done by the stewards of the smirking chimp.

Obama's biggest fault has always been his reluctance to be a populist when he needs to be. Perhaps that's because, as some say, he worries about being perceived as a — shudder — angry black man. I think it's just that he has the personality of a law professor.

But the president did say that this election was "a choice between two ... fundamentally different visions for the future. Ours is a fight to restore the values that built the largest middle class and the strongest economy the world has ever known."

That won't be easy. But that's what the Democrats, as flawed, imperfect and occasionally corrupt as they are, stand for. Getting us there won't be easy, and they'll have to be badgered constantly into not selling out. But the alternative is an eventual nation of the very rich living in guarded communities, and the desperately poor.

For those of us in the reality-based community, there doesn't seem to be a lot of choice.

Justifying a state takeover of Detroit: No, I am not calling for that. But the political idiots on the Detroit City Council seem to be doing everything they can to justify Lansing taking every vestige of power away from them. Last week, they added four charter revisions to the November ballot, which already had six state items.

They apparently really expect Detroiters to scrutinize 10 complex items in the voting booth, while picking candidates in dozens of other races. That's dumb enough ... but far from the worst part.

Three of the four proposals are beyond stupid. The worst of them would allow council to accept gifts. The city has a vast deficit and huge unfunded liabilities, but the clowns of the City-County Building want more than their $73,595 salaries and other perks.

To hell with ethics! The council also wants to speed up the revolving door, getting rid of the rule that city employees who leave can't come back for at least a year. And they want to give more power to Krystal Crittendon, the rogue corporation counsel, to allow her to take action without approval of the mayor or City Council.

All these ought to warm the hearts of Kwame Kilpatrick and Jailhouse Monica Conyers. But any sane Detroiter ought to vote no.

Passing of a giant: Ben Burns, a former executive editor at The Detroit News, built Wayne State University's journalism program into the most progressive force in the nation for bringing diversity into American newsrooms before dying of leukemia last week. He was also, as a flood of tributes proved, an amazingly good and self-effacing man who took great pride in the success of others.

Back in the 1980s, when the News had one of the largest circulations in America, Burns was being groomed to become the newspaper's publisher before the paper was purchased, and then virtually ruined, by Gannett. The nation's biggest newspaper corporation has since moved on to trivialize the Free Press.

Last weekend, the News did at least recognize Burns in a front-page obituary, in which the current publisher called him "a consummate editor who held words and people in equal high regard."

That he did. Which is why I was glad Burns wasn't around to read that News obit, since they got his height wrong by 4 inches.