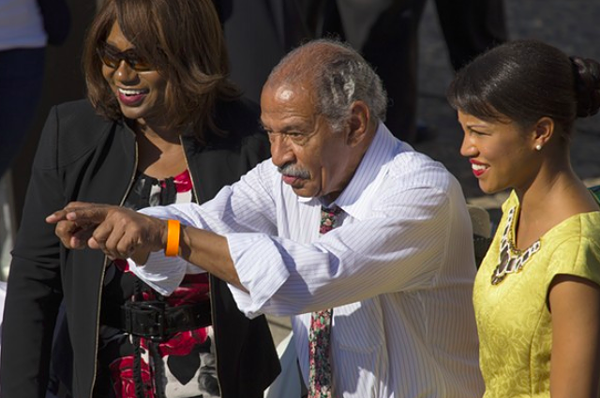 Some years ago, a press secretary for a powerful congressman, a woman I had come to admire and respect over the years, told me a story that was a stunner. She had been told — by another staffer — that part of her duties to the congressman would occasionally include "polishing his knob."

She was a professional and quite loyal to her boss, but indicated in no uncertain terms she had no interest in that.

Eventually, the advances began to become more direct, and she either had to leave or get fired. She told me this as a friend and asked for my professional advice, which I gave her.

She demanded a settlement, and when she didn't get satisfaction, she was within days of pulling the trigger and filing a lawsuit; she told me I'd be the first to know. Then, at the last minute, she told me the congressman's brother, also highly respected in the community, helped broker an agreement.

The former staffer got some money to help her start her life over, and asked me not to write about it so she could go on and make a fresh start — hopefully, far away from politics.

I honored her request, and lost touch with her. Then suddenly, surprise, surprise — in an atmosphere in which powerful men were being outed daily for sexual harassment, we learned Conyers had settled a woman's "wrongful dismissal" complaint.

Turns out my friend got a mere $27,111.75 in return for her silence. Conyers' fellow Democrats professed to be shocked, utterly shocked by all this. "Deeply disturbing," said Congresswoman Debbie Dingell.

"Incredibly serious and disheartening to learn," said Brandon Dillon, the state party chair. Both correctly endorsed what Dillon called "a full investigation by the House Ethics Committee" into all of the allegations.

They seemed especially troubled by Conyers' evident use of his office funds to pay her off, and they are right to be concerned about that. But here's what they aren't telling you.

Conyers' office was a cesspool of corruption for years. Everybody knew it; the media has written about it, though sparingly, and this stuff had even been taken to the ethics committee before — which did virtually nothing.

Forget, for a moment, sexual harassment, the current crime the nation is fixated on — even though another woman complained to the ethics committee about this, long ago. (They did nothing, as has always been the case until now.)

Michigan's longest-serving congressman has had a long, well-documented pattern of abuse of employees and government funds in ways that have nothing to do with sex.

But nobody was willing to do anything, till now.

One notable exception was Joel Thurtell, a former Detroit Free Press reporter and now an independent blogger. Thurtell is, for my money, the best investigative reporter in the state.

Virtually everything we know about Ambassador Bridge owner Matty Moroun's webs of corruption stems from Thurtell's original reporting, and for years he's documented Conyers' abuses as well. When the scandal broke in late November, he took a somewhat jaundiced view of the public outrage.

"The Conyers stench is not new," he wrote on his blog, joelontheroad.com. "The only surprise today is the media attention."

When I asked about this, Thurtell referred me to stories he had done as far back as 2003, showing that Conyers had been misusing public funds, big time.

Conyers, a Free Press investigation that year showed, had illegally and improperly forced members of his staff, employees paid with taxpayer dollars, to work on political campaigns — his own and others — on government time.

Three years later, further stories revealed that Conyers was using staff members to do his laundry, pick up his dry cleaning, and babysit his kids. One staff member, Deanna Maher, was told to move into his house for a few weeks and act as a nanny.

Maher also eventually told the House Ethics Committee she too had been sexually harassed by the congressman and an aide. So far as I know, they did nothing.

There were mounting and damaging claims of other abuses too; employees assigned to tutor Monica Conyers, the congressman's wife, who was then going to law school.

She never passed the bar exam, and eventually went to prison for taking a bribe from a sludge hauling company, but you can't blame a congressional staff for trying.

The abuses went on and on. Thurtell reminded me of the great Thanksgiving Turkey Scandal back in 2004, when the Gleaners charity gave Conyers' office 60 frozen turkeys to give to poor people. Conyers' staffers took off with the turkeys.

Nobody ever produced any credible evidence that any poor family even got one bird. But nothing was ever done.

Now, however, sexual harassment is a national buzzword, and some have seen it as a lever to finally get Conyers out.

What is still a largely taboo subject, however, is the question of the congressman's lucidity. What is well-known, however, is that while his behavior had long been erratic, his focus and concentration seem weaker than ever.

Yet Conyers has been an ethical embarrassment for the Democrats and his fellow congressmen for years — and until now, nobody in power had been willing to do anything about it.

There may be many reasons for this. Conyers was once a legitimate hero of the civil rights movement, and had been a warrior in other worthy causes, including being against the Vietnam War and in favor of impeaching Richard Nixon long before either position was cool.

However, the days when he was an effective leader are long past.

Many creatures have depended on his staying in power for their comfortable existence, and they have done all they can to keep him in his powerful job as long as he's still breathing.

What's needed is some honest, strong leadership, coming forth from somewhere to help do the right thing.

Let Richard Spencer speak: Richard Spencer, the warped little Nazi imitator, is possibly one of the more repellent mistakes nature ever made when it allowed a sperm to fertilize an ovum. He claims to have coined the term "alt-right," led the "blood and soil" marchers at Charlottesville, Va. last spring, and has called for "peaceful ethnic cleansing" of the United States.

Nobody who has paid any attention to him thinks he means the peaceful part. He has been applying for permission to speak on various college campuses, and has been turned down by many of them, including MSU and Ohio State.

But the University of Michigan regents and President Mark Schlissel voted to allow him to speak on campus — and that's exactly what they should have done from both a moral and practical standpoint. Moral, because as trustee Mark Bernstein told a somewhat angry audience, "the bedrock value of free expression ... is essential," to freedom, period.

Practical, because agreeing gives the university the right to determine the "time, place, and manner" of where Spencer can speak, with maximum safety considerations in mind.

If he sued and U-M lost, as seems likely, they might lose control of that, and have a security nightmare.

Plus, as Bernstein candidly said, "Look at our government today, with its totalitarian impulses," referring to President Donald Trump.

In other words, if we start suppressing free speech, "what speech, exactly, will this government suppress?"

You can bet it won't stop at warped little Dickie Spencer.