Coogan and Brydon’s final ‘Trip’ is a worthwhile sojourn 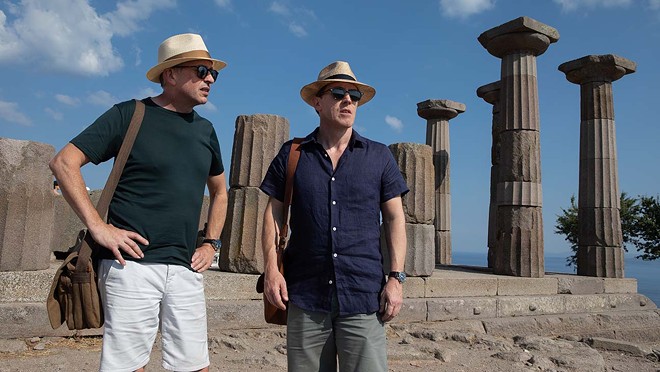 In The Odyssey, Odysseus takes 10 years to return home from the Trojan Wars. Though no one would argue that director Michael Winterbottom's Trip series is on the same aesthetic level as Homer's epic Greek poem, it has also taken his protagonists — slightly fictionalized versions of the actors Steve Coogan and Rob Brydon — a decade to complete their journey. And they end their adventure, fittingly, by attempting to retrace Odysseus's voyage from Troy to Ithaca, in The Trip to Greece.

The franchise began on the small screen in 2010 with a British holiday travel series simply titled The Trip. It featured Coogan and Brydon, in six BBC episodes, as actors-turned-food-critics, touring restaurants in northern England. Those shows were then edited together into a feature film.

That formula continued in 2014 with The Trip to Italy, in 2017 with The Trip to Spain, and now with The Trip to Greece, which first aired, in six episodes, on Britain's Sky One in March. Though the whip-smart banter, self-deprecating humor, and celebrity impersonations have occasionally grown tedious, especially in the Spanish sojourn, the series has maintained a good deal of its charm, if not its originality. But, as Coogan says in the latest edition, "Originality is overrated. Everything is derivative."

That doesn't mean there aren't new vistas and even fresh storylines to enjoy in the new film, which its creators confirm will be the last. And, as usual, famous sights and scrumptious cuisine abound, though this latest film focuses more on Coogan's and Brydon's characters, and their family, colleagues, and romantic interests.

Yes, you will hear plenty of dialects, accents, and impressions, but you won't see as much of Athens as you might expect. Still, you will get glimpses of that city's Ancient Agora, not to mention the Temple of Apollo at Delphi, the ancient theater of Epidaurus, the Caves of Diros, the Palace of Nestor and the island of Hydra. If you haven't been to Greece, it's a bit difficult to follow the film geographically, but, at the end of the six-day trip, we discover that the film's raison d'etre lies not in the Greek Isles but in the hearts of its characters.

"In a macro sense, we've been on the odyssey for 10 years," Brydon reminds Coogan. Yet Coogan's collaboration with Winterbottom goes back a decade further and includes last year's Greed (also filmed in Greece), as well as A Cock and Bull Story from 2005. (That metatheatrical, largely improvisational movie also co-starred Brydon and partially inspired The Trip.)

The oddest thing about the Trip movies is that they are food films, travelogues, personal essays, comedies and dramas — sometimes one at a time and sometimes simultaneously. Indeed, Winterbottom's odd, genre-busting formula really shouldn't work, at least not in a feature-film format. But it usually does, thanks mostly to the two actors' chemistry. And by the end of the latest chapter, the film flirts with another, even more appropriate genre: Greek tragedy. I guess not much has changed in 2,880 years.