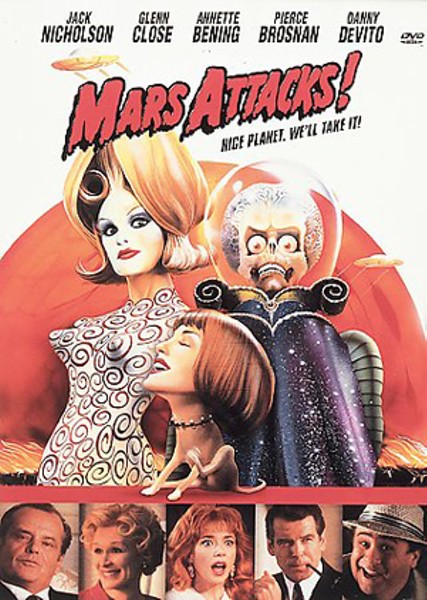 This spring's historic Democratic race saw the first front-running black and female candidates vie for the party's nomination. But in the entertainment industry, such an election must seem like old hat. Progressive movies and TV shows have already given us worlds where African-Americans and women hold the highest office in the country, and nobody would dare suggest Dennis Haysbert, Morgan Freeman or Geena Davis were unfit for the role of chief exec because of race or gender. This year's election only confirms that Hollywood's embrace of female and minority presidents wasn't just naive idealism.

But movies in general have always had a fickle relationship with the White House, revering and spitting on the office of the presidency in equal measure, as this countdown of the 10 most memorable filmic presidents shows.

Fictional presidents are relatively new in Hollywood; from the classical period through the early '60s, one can point to Gabriel Over the White House. 1980 saw the hard-to-find Bob Newhart vehicle First Family, but the creation of fictional presidents for satiric and action-movie purposes didn't take off until the '90s. The sex scandals and impeachment of Bill Clinton raised the level of cynicism and yes-they-went-there audacity in the department of fake presidents, while George Bush's impact is seen mostly in dopey caricatures, a la Dennis Quaid in American Dreamz. Because caricature is close to impersonation, I chose to omit movies in which the fictional presidents are obvious parodies of real ones. The leaders on this list may deal with issues that our contemporary presidents face, but they're not composites of real-life position-holders.

Enjoy this analysis of the best and worst presidents the movies have given us — No. 10 being the Worst Fictional President Ever and No. 1, the Best.

Clint Eastwood's politics are complicated, but his depiction of the presidency in Absolute Power is simple and cynical: It's rotten to the core. We first see Richmond brutalizing and attempting to rape the wife of an old friend, and when the incident leads to her death, he spends the rest of the picture trying to cover up his involvement. Gene Hackman is best in roles where he's at least a little bit sinister, and here his chief executive is so callously charmless and the abuse of his title so flagrantly obscene that it's a wonder he ever got elected in the first place. Still, we can only assume the country's in a state of great economic prosperity during his gangsta administration, given that all we ever see of the Richmond regime is one grandiose White House ball after another.

You've got Will Smith's charismatic superman, Jeff Goldblum's deadpan thinker and Randy Quaid's self-sacrificing loon ... in this stock lineup of heroic males, where does Pullman's namby-pamby president fit into things? As the country's dashing leader in Roland Emmerich's jingoistic trifle, Whitmore's presence is validated almost solely on that smoke-and-mirrors pep talk toward the end, designed to win over his listeners with patriotic rhetoric and distract the populace from the unfathomable carnage his administration has been unable to stop. Yes, Americans rally behind the president in a time of total chaos, but history's critical distance would reveal Whitmore to be a facile pretty face.

It's never identified what party Mitchell belongs to, but even though the guy croaks while fucking his secretary — anticipating Bill Clinton's Oval Office infidelity — we can only assume he's a Republican. He certainly talks like an upper-1-percenter, wanting to veto a humanitarian bill but too afraid he'll be perceived as the kind of guy who vetoes humanitarian bills. (Sounds like a big-business neocon to me.) Whatever his party, he's ripe for removal, and going out with an orgasmic bang is as adequate a way as any to propel this preposterous narrative on its populist path.

President Beck is the prototypical president in disaster blockbusters: stiff, apolitical and utilized mostly for exposition. The state of the union is not strong in Deep Impact: A comet is hurtling toward Earth, promising an "Extinction Level Event," and none of the president's initiatives are succeeding at stopping it. Appearing at various intervals to deliver doom-laden speeches to the American public, Beck is nothing if not a straight talker, and who doesn't trust the saintly Freeman? But the fact that his administration initially withheld from the public its knowledge of the comet's destructive path would certainly raise the ire of the blogosphere punditocracy and earn him a special comment or two. Needless to say, the catastrophic number of American deaths on his watch probably wouldn't help his poll numbers either.

All I remember of Wolfgang Peterson's aerial blockbuster is the president's line "Get off my plane!" — which pretty much summarizes the movie in four words. You can just hear the pitch from the eager screenwriter: An American president announces a bold, zero-tolerance policy toward terrorism, only to have his anti-negotiation ideals tested when Russian hijackers take over his plane, threatening to kill his family if their demands are not met. Indiana Jones as commander in chief, President Marshall manages to kick ass even in distress; in the world of Hollywood movie presidents, a background in karate and a mental file of bellicose quips are far more important than a sound tariff policy or a sensible education platform. At any rate, even if you like this kind of thing, Air Force One isn't much fun these days — terrorist plane-jacking isn't the right milieu for rah-rah melodrama anymore.

OK, maybe this is cheating, because Gilliam doesn't attain the presidency until the end of the film, but in efforts to justify the hour and a half wasted watching Head of State, here you have it. As a comedy, Rock's directorial debut is an abysmal failure, and as an actor he only feels comfortable in the one scene in which his character — an inner-city alderman tapped by a group of malicious Beltway suits to run for president (and lose) — decides to go off script and play to the crowd like he's on a comedy club stage. But Gilliam is an undeniably appealing candidate, refusing to be a pandering marionette and striking honest chords of hope and change with his unhinged, profanity-laced riffs. Gilliam would probably make a disastrous leader if Hollywood's dried-trough desperation warrants the green-lighting of a Head of State sequel, but the messages here at least are on target.

Poor President Dale. He tries to do what's best for the solar system by avoiding war if at all possible, even as Martians are obliterating everything in sight and Rod Steiger is breathing down his neck to go nuclear — or, as Steiger's hawkish general prophetically pronounces it, "nucular." Alas, Dale proves to be weak on extraterrestrial terror, which leads to his downfall. But at least he tried, and he wasn't an asshole. Nicholson plays himself the whole way through, or rather he plays his cartoony persona, and the self-consciously ostentatious performance makes this mediocre curio worth revisiting.

This is a movie about the executive branch whose main focus is not the man in the Oval Office. Feeling the reverberations of Bill Clinton's sexual misconduct while looking ahead to his wife's uphill battle as the first major female presidential candidate, The Contender is a commentary on character assassination, misogyny and sex scandals, played out as a confirmation-hearing interrogation between a liberal vice-presidential appointee (Joan Allen) and a McCarthyist House judiciary chairman (Gary Oldman). Jeff Bridges acts his part as President Evans with the appropriate understatement of a co-star who knows his role in the movie's grand sweep. He acts like Joe Six-Pack with a presidential seal — smoking, drinking, bowling, swearing — but his inevitable speech at the film's end reveals the intellectual core of the man. Evans embodies that almost unattainable political paradox: the average elite. In doing so, despite his foul mouth, he comes across more Clintonian than Nixonian.

The second great 1964 movie born of Cold War panic (Dr. Strangelove being the other one), Fail Safe grapples with the then-scarily possible scenario of a technical glitch that, through the U.S. and Soviet governments' overreliance on technology, accidentally causes World War III. The most riveting moments in Sidney Lumet's austere suspenser are the ones featuring two men, a telephone, a pitcher of water and a spartan room — one of the men being the president, who may have to order his own planes to destroy New York to save two nations. The piece is lent ever more gravitas by the casting of Fonda, the great moral compass of the classic Hollywood cinema, as the bullet-sweating commander in chief forced to make the most horrifying decision of probably any presidency, real or imagined. Maybe it's just the Fonda factor, but I'd bet even after the dust settles on where Manhattan used to be, the president's approval ratings would remain high.

Well, duh. The American President is the best film ever made on the subject, sparkling with the effortless wit and exhaustive research with which Aaron Sorkin would go on to imbue his even more definitive expression of liberal wish fulfillment, The West Wing. While movies like Dave and Head of State peddle the romantic notion of an ordinary joe ascending to presidential status, The American President descends its titular character to the status of ordinary joe, resulting in a three-dimensional, complex and altogether human president, complete with temperamental outbursts and misguided judgments. But the speech at the end is the stuff of legend, a rousing rejection of the personal attacks of the film's Republican villain Bob Rumson (Richard Dreyfuss, looking every bit like Dick Cheney) and an inspirational celebration of our civil liberties. One wonders if a young Barack Obama was taking notes.


For a fairly comprehensive list of U.S. presidents in film and television history, see this guide.