Cranbrook exhibitions explore the 'intersection of art and street culture’

Four seemingly different solo exhibitions are set to open on Friday at Cranbrook Art Museum. But a closer look finds a common thread that runs through all of them.

Laura Mott, curator of contemporary art and design at the museum, says that the artists are united in that they are "all linked by the intersection of art and street culture."

"I think it's very much about taking from street culture an inspiration," Mott says, "as a place for drawing upon aesthetics and what the street looks like, and how people interact with it."

There's Basquiat before Basquiat: East 12th Street, 1979-1980, on loan from the Museum of Contemporary Art Denver, which focuses on the entire body of work the artist made while living with lover Alexis Adler in New York's East Village neighborhood. (Adler will even be on hand, along with exhibition curator Nora Abrams of the Museum of Contemporary Art Denver, for Boom for Real: A Conversation on Jean-Michel Basquiat from 1 p.m. to 3 p.m. on Saturday.) Mott says the exhibition focuses on a time when the late artist was "right on the precipice of becoming a real formal painter," when he was heavily inspired by his surroundings in New York and active as part of the graffiti duo SAMO.

"His production was very much on a variety of surfaces that were part of the everyday, part of the street and street clothing," Mott says.

A separate exhibition features another late yet equally iconic artist from New York. Keith Haring: The End of the Line marks the 30th anniversary of the temporary mural he created at Cranbrook, parts of which were re-created here. Mott explains it was a pivotal work for the artist. "In that moment he found a lot of freedom," she says. "He was already a well-known established artist for his subway drawings, which were all kind of jovial and sometimes cute, looking very cartoonish." The Cranbrook mural was made toward the end of the artist's life, when he discovered he had HIV and his work took a dark turn.

In a lecture given at Cranbrook, Haring said the Cranbrook mural was the best painting he had ever done. "In part it was a breakthrough for him, and the fact that it was temporary gave him an enormous amount of freedom," Mott says. "He wasn't thinking about something that had to live on for decades and decades. He was also, I think, aware of his own mortality, and this was during the AIDS crisis, so I think this was a moment for him." 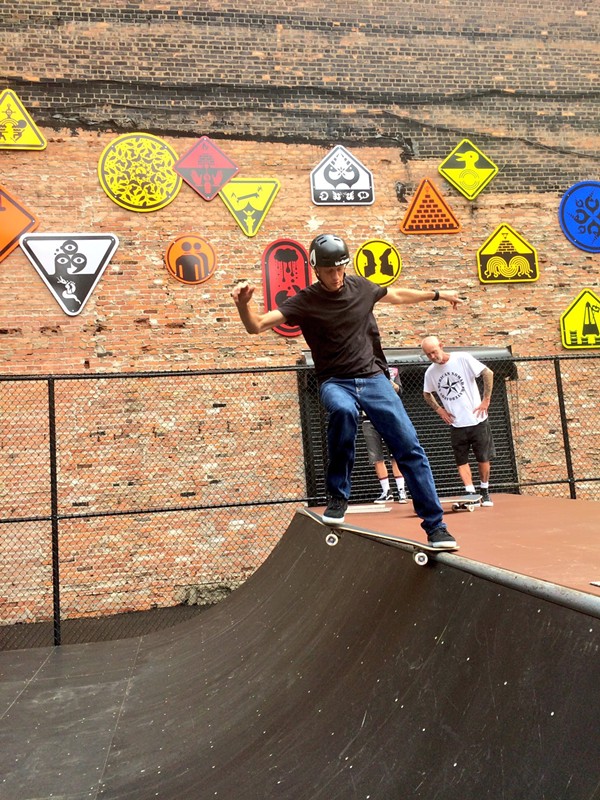 The exhibitions are augmented by work from contemporary artist Ryan McGinness, whose Studio Views and Collection Views re-creates the artist's studio and also exhibits new work. The New York-based artist is equally inspired by street art and graphic design. (He also has a background as a skateboarder; in fact, you can find skate culture-inspired designs decorating Tony Hawk's Wayfinding skate park currently set up in downtown Detroit.)

To round out the new exhibitions there is work from Detroit-based Maya Stovall, who presents Liquor Store Theatre Performance Films, which she is creating as part of her Ph.D. program at Wayne State University. The artist, who has exhibited at the most recent Whitney Biennial, has backgrounds in dance and anthropology. Liquor Store Theatre is her pop-up series of dance performances in front of the liquor stores in front of her McDougall-Hunt neighborhood in Detroit.

"She uses dance as a way of creating spectacle and pause," Mott says. "After she finishes her dance she interviews the people who have gathered, and creates that as a way for people to open up. She put herself on view, and other people are more willing to open up and talk about Detroit and the socio-economic conditions of the city."

Mott thinks Stovall was the perfect final piece of the puzzle. "I was really excited about bringing Maya because she's working against the surface of the street with her dance movements — if you think about Basquiat roaming the streets and creating work," she says. "Maya's kind of the Detroit version of that, working today and with that same kind of legacy."