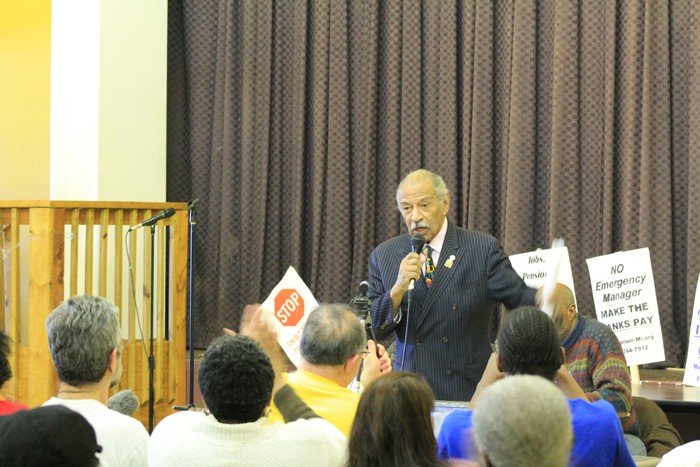 Detroiters opposed to the restructuring plan filed by Detroit Emergency Manager Kevyn Orr sent a message this week to officials looking to expedite the city’s historic Chapter 9 bankruptcy: The pushback has just begun.

That’s the takeaway we here at the Hits gathered from a town hall meeting Sunday, where a consortium of activists delivered a critical take of Orr’s required bankruptcy-exit plan, called a “Plan of Adjustment.” The meeting, sponsored by the group Moratorium Now, drew about 300 retirees who offered support for the consortium’s alternative proposal to Orr’s plan.

And, admittedly, when the Hits crew dragged itself out of bed to brave the frigid cold, we only anticipated to hear an elaboration on the alternative Plan of Adjustment released last month, called the “People’s Plan for Restructuring Toward a Sustainable Detroit.”

We heard that. But, we also heard a surprise off-the-cuff speech from U.S. Rep. John Conyers, who pledged to return to Washington D.C. this week and talk directly with President Barack Obama about “what we’re doing and how the federal government can help us.”

“[Obama] will be hearing about this personally,” Conyers says. “I guarantee you.”

Conyers detested the proposed cuts to pensions in Orr’s Plan of Adjustment — as much as 34 percent for general retirees and 10 percent for police and fire employees.

“We already paid for the pensions,” Conyers says, adding he supports the activists’ effort against Orr’s proposal “100 percent.”

We also heard a big response for a number of proposals laid out in the People’s Plan, including a law requiring automatic payroll deductions for every city with a local income tax; fully restored state-sharing revenue, which the consortium says accounts for more than one-third of Detroit’s revenue losses since 2011; fully discharged Wall Street-related expenses in Detroit’s bankruptcy, and more.

After a couple of presentations, the droning legalese surrounding Orr’s 120-page plan started giving us a headache. And, to make matters worse, the last economics course the Hits took, that we can recall, was Home Ec. So we appreciated when Cheryl LaBash, a retired city worker, took the mic and delivered a layman-friendly PowerPoint presentation that dissected Orr’s plan and highlighted the uncertainties of it. She, and other critics, point out that Orr relies on a number of unknown variables.

For one thing, Orr offers a sweetener if pensioners agree to his proposed cuts sooner without a court fight — a few additional percentage points restored to their pensions. But if they pursue more litigation, the cuts could worsen, on top of the eliminated cost-of-living increases, according to the exit plan. The plan, in its current form, also hinges on a $350 million pledge from Gov. Rick Snyder, contingent on approval by the state legislature. Without the support of Lansing — and, presumably, a number of lawmakers outright opposed to appropriating funds for Detroit’s bankruptcy — the proposed pension cuts could be much more severe.

The upshot of Sunday’s meeting was clearly that some feel not enough focus in Detroit’s bankruptcy has been paid to banksters who pushed predatory lending schemes in the mid-2000s that precipitated the recent economic crisis.

Attorney Jerry Goldberg, part of Moratorium Now, told attendees that neither Orr’s Plan of Adjustment, nor a 440-page Disclosure Statement filed in court, includes “one word about what really caused the crisis in Detroit.”

He says the big banks were responsible for creating the bubble that caused the economy to collapse, by selling supposedly low-risk financial products based on risky mortgages. Detroit, along with a number of cities, saw their tax bases decimated as a result of the subsequent foreclosures.

“Our neighborhoods were stabilized,” Goldberg says of Detroit a decade ago. “We had the highest homeownership rate in any city.”

Now, we at the Hits know Detroit’s fiscal mess was caused by a number of reasons, but the foreclosure crisis certainly exacerbated the problems, a point highlighted by Goldberg. He says between 2005-2007, 73 percent of Detroit’s mortgages were subprime loans. In that time frame, 67,000 homes were foreclosed on. Another two years later, he says, another 50,000 homes were lost.

Goldberg echoed a call issued by a number of speakers at the town hall meeting: The pushback to Orr’s restructuring plan can’t be fought solely in the courts; it has to be taken to the streets. And not just in Detroit, but on the steps of the U.S. Capitol too.

The coalition has planned a protest downtown on April 1, timed to coincide with the deadline to file legal objections against Orr’s plan. For more information, see d-rem.org/peoplesplan.