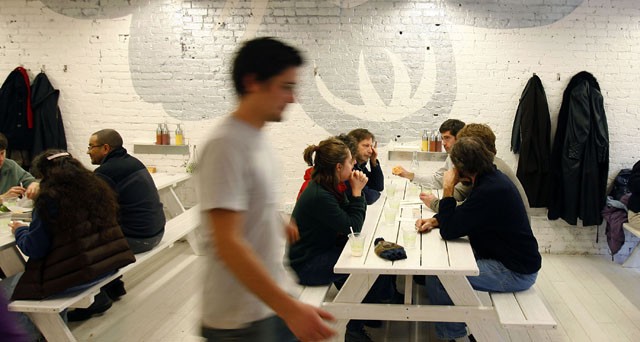 At Ann Arbor's newest casual dining spot, Frita Batidos, a sign hanging over the espresso machine proclaims, "NO, I am not Cuban — and this is not a Cuban restaurant." The food may not be traditionally Cuban, but paradoxically, the restaurant is entirely authentic, driven by the clarity of chef Eve Aronoff's Latin-flavored vision.

Fritas are Cuban burgers made from spicy chorizo, and batidos are tropical milkshakes. The restaurant takes not only its name but its inspiration from these dishes.

Outside, early risers can approach the snack counter, an obvious and welcome nod to street food vendors, where coffee and a few breakfast snacks are available.

Inside, the restaurant is elegantly Spartan. Exposed brick walls and tables are whitewashed, sugar cane bundled in the corner. Countertops are wood accented by metal fixtures. And large menus hang above the register, prompting newcomers to stare skyward, paralyzed by indecision and anticipation.

Orders are placed and paid for just inside the door with one of the young staff members, each possessing a thorough knowledge of the menu. Seating is communal: Several large picnic tables sit opposite the register, and bar seating spans the front window and back wall.

Food is promptly delivered from the kitchen, and servers give customers a quick shout as they drop off their orders.

Presentation plays a big role here: Sandwiches are atop banana leaves in paper sleeves, and — furthering the street food motif — almost everything is served in biodegradable disposables, all given to diners on small aluminum trays. Perhaps the cutest touch is how the ginger-lime sodas are packaged: They're served in sandwich baggies with a straw locked into place by the tied-off bag, something akin to a homemade Capri-Sun packet.

As creative and thoughtfully planned as the setting is at Frita Baditos, it's the food that's most memorable. In contrast to Aronoff's nearby, more upscale Eve, offerings here include a long selection of sandwiches as well as street food-style desserts, coffees and a few breakfast dishes.

Five fritas are featured on the menu — patties are made from chorizo, beef, turkey, fish and black bean — and each is served between a split brioche, which solves one of the classic problems posed by burgers: soggy buns. No matter how much grease or mayo seeps into the bread, it remains whole, elastic and easy to eat.

All of these Cuban(ish) burgers, priced at $7, are served covered with fries and flavored mayo to delicious results. Surprisingly, this includes the fish burger, which has a delicate hint of lemon; but the original chorizo patty, kissed with a subtle sweet heat, is irresistible. Toppers available for a buck or two apiece include egg, Muenster cheese and various Latin-flavored coleslaws.

The batidos are delicious, and, though portions appear modest, the shakes are quite filling. Choose from different fruits for your shake, or get the Batido Especial, which replaces traditional puffed wheat with Honey Smacks cereal.

Among the other menu items, pulled pork, grilled cheese and sloppy joes are examples of Aronoff's creativity in taking fairly standard American fare and reinventing it in a Cuban context.

Conversely, the Inspired Cuban Sandwich brings an American foodie sensibility to the common Cubano. At $12, it's the most expensive menu item, pairing thick-cut bacon, pork and tasso ham with cornichons and Gruy�re and served on a dense Cuban bread made traditionally from lard. It's delicious and unlike any of its popular panini-pressed Cubano cousins.

The long list of sides is highlighted by twice-fried plantains for $6. Crispy on the outside, soft on the inside, and tossed in a cilantro-garlic butter, they're appetizing enough on their own, but are even better with the accompanying chili mayo. A side of fries is plenty for sharing, as are the $10 conch fritters, perfectly fried with a moist, soft interior and served with a trio of sauces.

The other snack and side options consist of beans, rices, slaws and salads. Though, on one visit, the Tropical Slaw was oversaturated with mayonnaise, it's generally a refreshing combination of Latin-American flavors, including cilantro, red onion and uniquely fruity undertones. A small cup costs $1, and a large $5.

Get the churros. There's no need to obscure that recommendation in flowery language. Frita Batidos' take on the well-known fried dough treat is scented with orange and nutmeg, a subtle but surprisingly eye-opening twist. For $4, one receives a huge portion. Not quite as subtle are the sugared plantains, which are a bit cloying and best-suited for only the most avid sweets seeker.

Finish your meal with some Cuban espresso, traditionally pulled with sugar in the ground coffee. Peculiarly, one cannot purchase a full shot, but for $1, customers are offered a thimble-sized pour. Other choices are more satisfying, especially a latte made with cajeta, caramelized goat's milk, creating an addictively flavorful drink. These liquid treats are also available throughout the morning from the snack counter.

Some details are still in flux: Most significantly, as of late December, the restaurant's liquor license is not yet in place. But in total, chef Aronoff's new restaurant is a fantastic addition to Ann Arbor — unique yet familiar, creative yet comfortable — that brings some much needed whimsy and a hell of a burger to Main Street.