Get your chicken hats out 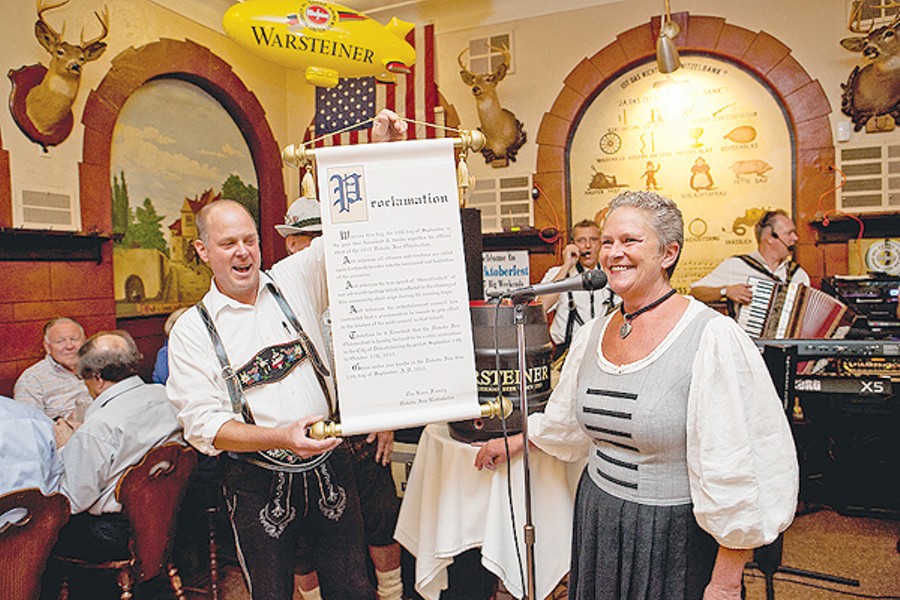 Generally, it seems, writing about the Dakota Inn Rathskeller is relegated to late September and early October. Whenever Oktoberfest is about to kick off, the media grows abuzz with the quasi-authentic nature of this German restaurant.

But with August upon us, we here at Metro Times find ourselves once again thinking about the Dakota Inn — a place that's both odd and unique. It has that wooden, antiquated, Old World style — complete with taxidermy, exposed brick, and interesting artifacts — that has hipsters across the metro area tripping over themselves. Yet inside are a cast of bartenders and waitresses who come to work every day wearing traditional German clothing — all except for those sensible shoes. We haven't done any extensive research, but we're pretty sure New Balances weren't worn to the first horse races at Theresienwiese. In short, there's nothing pretentious about the Dakota Inn.

The Kurz family has owned the Dakota Inn since 1933, when it was just a tiny three-stool Rathskeller. Karl Kurz, grandson of the original owner, runs the joint.

Faced with red brick and topped with a single turret and stone roof, the Dakota Inn stands on John R near Detroit's Sherwood Forest and Palmer Woods neighborhoods. Its interior offers warm lighting that descends from old-fashioned chandeliers, and the tables are made of a dark wood in a style that lets customers know they're in the land of Bavaria.

The menu consists of traditional German cuisine, including Kartoffelpuffer (which is a real thing), bratwurst, knackwurst, Huhnerfleisch (also a real thing), marinated herring filets, and Kasepatzle (seriously, we can't make this stuff up). Served up, the food isn't terribly impressive, but it gets a satisfactory rating of "good."

Surely, though, what's important about a German establishment is the beer. Most often, they have some hard-to-pronounce German beers available along with American standards, and the servers are generally kind enough to suggest something if your beer of choice is usually Coors Light.

At around 2,000 square feet, the Dakota Inn can host about 145 guests, and every time we've been there it's been relatively busy. The restrooms, which aren't generally noted in a column such as this, are in fact noteworthy for their miniature nature. Let's just say anyone over 5-foot-3 is going to feel awkward. But alas, it's part of the place's charm.

This Wednesday, Aug. 6, the Dakota Inn will celebrate 81 years in business. While they're only open from 11 a.m. to 2 p.m. for lunch on Wednesdays, they'll be celebrating the entire three hours. The website beckons customers to bring their nickels and dimes.

Come Oktoberfest, which kicks off here on Sept. 19 this year, the Dakota Inn will celebrate the traditional holiday with a keg tapping, a live oompah band, and chicken hats for all. The big celebration costs just $3 to attend. Once the ceremonial keg is tapped, folks line up, steins in hand, for a draft of the suds sequestered inside.

Throughout the year, the Dakota Inn offers various other forms of entertainment, like sing-alongs, with assorted hosts who employ the 80-something-year-old house piano.

To say there's a sense of community here might be an understatement.