Dan, Mike, and the women of Detroit 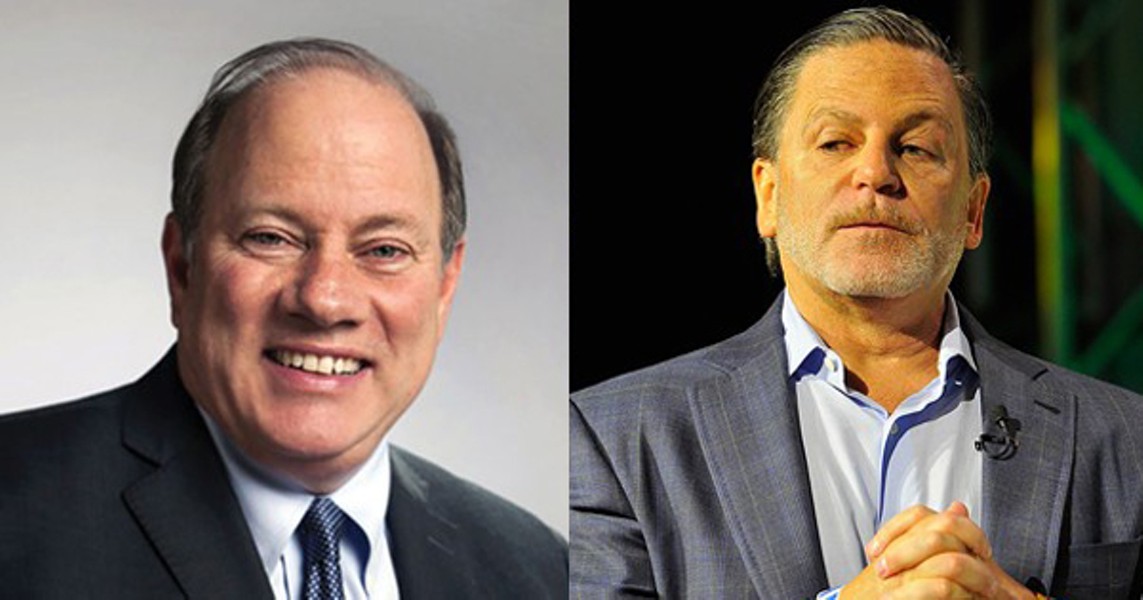 The lede gave a bit more on this convergence of power: "Two of Detroit's most powerful men traded quips and compliments Thursday and offered upbeat perspectives on Detroit's revival at the latest Pancakes and Politics event."

They had to say it twice, just in case you didn't get it that businessman Dan Gilbert and Mayor Mike Duggan run things around here. That's the narrative and that's what the media enforces just so people know who's in charge — even if it's International Women's Day and women are being celebrated around the world.

OK, so the Freep doesn't control when the political breakfasts take place or when Gilbert and Duggan decide to kick back and congratulate each other on what a fine job they're doing. Still, it was an uneasy convergence of truth-telling. They were eating pancakes, but it had the aura of a couple of guys kicking back with cigars and bourbon to pat themselves on the back and say, "We got it going on."

Tawana "Honeycomb" Petty, a local activist and a member of the Boggs Center board of directors, has some thoughts on that. "The constant narrative of wealthy white men as the source of 'power' in a city where the households are run predominantly by black women is dehumanizing, especially on International Women's Day," she says. "Black women have been holding down a city that was abandoned by most of the world for nearly five decades. We were not supposed to survive in the constant barrage of negative propaganda that has cursed us for half a century, but we did and we are. Black women have been, and continue to be, instrumental in our resilience."

Petty has a practice of speaking truth to power. Shortly before catching that headline I had just watched a video of the Detroit People's Platform People's Response to the State of the City, led by Petty.

Duggan had delivered the State of the City speech on Tuesday, March 6 evening. The response addressed issues such as transportation, affordable housing, and water shutoffs.

"Historically and during my entire life, black women have been engaged in every aspect of struggle in Detroit," Petty says. "There are mothers sharing water hoses through their windows for families suffering water shutoffs. There are women cooking meals for the children on their block whose parents are working double shifts to try to make ends meet. I have witnessed and experienced Detroit women opening up their homes to children and families with no other place to go. I hesitate to call these responses progressive because this has just been the way that Detroit women have showed up for each other and their city for as long as I can remember."

So maybe your perspective on Detroit depends on where you are observing it from. During the pancakes conversation, Duggan claimed that Detroit, "is a city where you can build your dreams." Apparently it's also a place where you can suffer your nightmare.

Of course, during the Duggan-Gilbert back-patting session they cited lighting improvements and other things, while acknowledging that more needs to be done. Well, that makes sense and keep it up, but it's time to stop touting the lighting fix as the Duggan administration's signature achievement. We're in the fifth year of the Duggan era, and that next big thing needs to happen.

The pancake back-pat discussion also touched on e-commerce giant Amazon eliminating Detroit from consideration for its new headquarters. Gilbert showed the city the back of his hand on this one. The Freep article said, "Gilbert challenged the notion that Detroit lacks talent. He cited the example of Ivy League students from universities including Brown and Yale that come to Detroit for internships with his companies."

It's not like he said we are going to get Detroiters trained up so this doesn't happen again. No. He just called for more people to come from somewhere else to get those good jobs.

On Tuesday, March 6, Duggan gave a great feel-good speech about everybody in Detroit cooperating and working together and all the things he's going to do. On Thursday, March 8, when the two powerful men had their pancakes, it was a demonstration of how things really work around here. And the ladies weren't invited.

Kurdish women make the day: The greatest and most powerful thing I saw on International Women's Day was a "Call to women around the world" from the Kurdish women's movement. This manifesto begins with the greeting: "From the mountains of Kurdistan, in the lands where society developed with the leadership of women."

It is truly a global document, tracing the roots of "capitalist modernity" to Mesopotamia 5,000 years ago, decrying the artificial borders of the Middle East that were drawn by Europeans after World War I, and naming the current military war in the area World War III. Then they nail the world situation in the following section:

"We are in the midst of a historic process. The patriarchal system, as the age peer of statist civilization, is undergoing a deep structural crisis. As women, we must diagnose this systemic crisis with its causes and consequences, establish strong analyses, and develop perspectives that will accelerate our struggle. For, just as the system's structural crisis constitutes great threats to women around the world, this situation also offers opportunities to guarantee women's freedom, opportunities that perhaps only come once in a century. We even say: We can turn the 21st century into the era of women's liberation! This is not a dream or a utopia. It is a reality. But in order for it to come true, we must create a women's liberation program for the 21st century."

It's why Veep Mike Pence will not have a meal alone with a woman who is not his wife. It's why opposing a woman's right to choose when to have a baby is a central plank of the Republican Party platform. It's why the Equal Rights Amendment was never ratified.

As the Kurdish women say, "there is no land spared from feeling this crisis, no lake, mountain, or river left untouched, no society that was not affected by attempts at domination. However, those most affected by the crisis are women." They then point to the solution: "Women and women's liberation constitute the fundamental opposing power of the patriarchal capitalist world system."

This is an amazing document that pulls together so much of what I see going on in the world into a coherent vision and statement. It needs to be widely read.