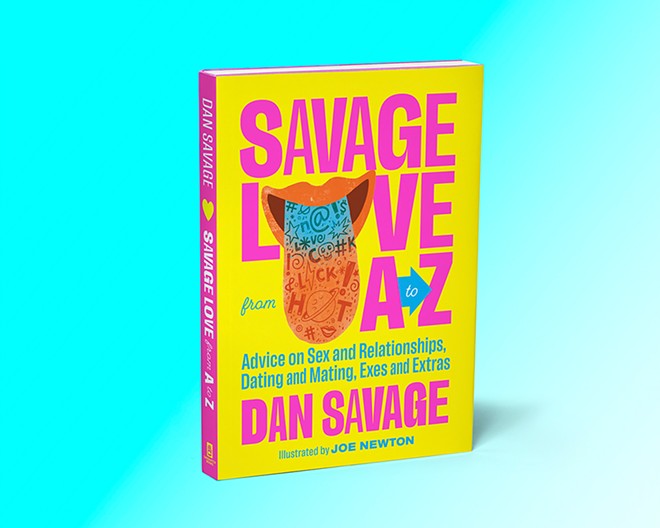 Things have changed considerably since Dan Savage started writing his sex advice column “Savage Love” in Seattle’s alt-weekly The Stranger 30 years ago. The column is now syndicated in more than 50 papers across North America (including in yours truly), led to a longrunning Savage Lovecast podcast, and has even spawned its own veritable dictionary of terms, many of which have entered the mainstream lexicon.

Savage credits the creation of the terminology to the rapport he developed with his readers over the years. “People do talk about sex with their close friends, and develop a code, you know, a certain lingo, when they’re talking about sexual relationships,” he says by phone. “That’s really kind of what Savage Love became with my readers.”

The terms are collected in Savage Love from A to Z: Advice on Sex and Relationships, Dating and Mating, Exes and Extras, a new book by Savage out now from Sasquatch Books. Presented in a children’s book style, the 148-page collection of essays and illustrations covers the themes and concepts explored by Savage Love over the past three decades, drawing from more than 3,500 reader letters.

The idea for the book came from longtime Savage Love illustrator Joe Newton, who first started working with Savage at The Stranger as the paper’s art director about 20 years ago. Newton says he first started at the paper designing ads, having taught himself design by making record sleeves and gig posters for his band. That led to eventually becoming the paper’s art director, “in sort of a ‘fake-it-til-you-make-it’ way,” he says, and the task of coming up with an illustration for Savage’s column each week on a short deadline.

Newton says he initially took a literal approach to the column’s illustrations; if a column was about a couple filming themselves during sex, for example, he would just illustrate that.

“And I don’t think I was ever entirely happy with that,” he says. “I’ve always felt that the column already has plenty of visceral details, and it’s plenty vivid — it doesn’t really need the illustration to add to that part of the content.”

At a certain point, he realized that drawing anthropomorphic animals had more of a universal appeal, rather than focusing on trying to be inclusive by depicting people of different ethnicities and genders. He says another breakthrough came when he realized one particular column was broadly about the subject of personal accountability rather than the particulars of the reader’s sex question. He drew a dog picking up its own poo, with the phrase “A is for Accountability.”

Newton says he realized that Savage Love was about these broader themes, too. “I feel like that’s really what Dan is good at,” he says. “He’s talking about bigger concepts, bigger relationship concepts, and not just the specificity of whatever this particular question entails.”

Savage says he’s often pleasantly surprised when he sees what Newton comes up with each week. “He has a wonderful kind of classic children’s book illustrator style that he brings to illustrate the column,” he says. “And there’s something kind of wonderful about the tension there, between the illos and the way they look and feel and the column and what we’re talking about. There’s always a joke in them. They’re tremendously witty, and if you look at them carefully you’ll catch double meanings or double entendres.”

Newton says he first approached Savage for the idea to collaborate on a book together about two years ago. He started by giving Savage a list of terms from the column assigned to each letter. They wound up doing two words for each letter, to fill empty spaces created by the layout design process.

Newton says that the format of the book allows for Savage to distill 30 years of wisdom into essay form. “I think it’s nice to hear him speak his own mind directly rather than in response to somebody else’s query,” Newton says. “I’m so used to reading him in the column that I just felt like, ‘Oh, you’ve got this now, you know all this stuff.’ And I think it’s a refreshing way of accessing what he has to say.”

Savage says beyond the book, column, and podcast, that he’s working on a television project that he hopes will come to fruition soon. But he’s careful to give credit where it’s due when it comes to the impact of his column on language.

“That’s been gratifying, to have that sort of impact on the English language,” he says. “But a lot of what is going to outlive me about Savage Love was the genius of my readers, not the author of the column.”

Savage Love from A to Z: Advice on Sex and Relationships, Dating and Mating, Exes and Extras is available now from Sasquatch Books.