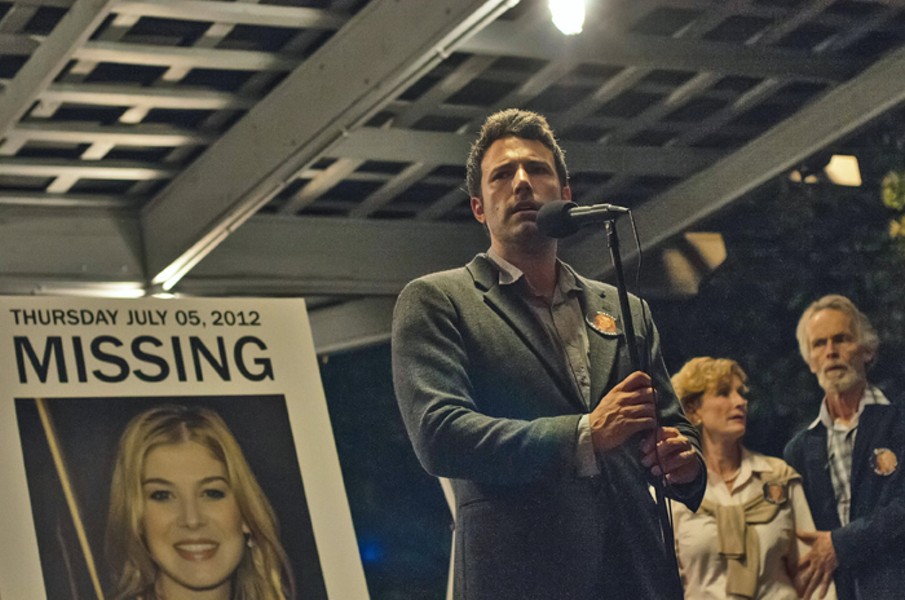 Though it’s smart enough to hint at the satire it could’ve been and entertaining enough to deliver the trashy goods, Gone Girl cements one unfortunate fact: Director David Fincher is becoming the go-to guy for middlebrow, beach-towel novel adaptations.

Falling back on his skills as an ad-man, this taut, sleek, lurid potboiler will probably bring in bigger box office than any of Fincher's previous efforts. But let's be straight here: The celebrated director is essentially putting lipstick on a pig, expertly parceling out the novel's famed reversals, revelations, and surprises with a master's dexterity but mostly delivering well-made junk food. Gone Girl isn't as wicked as it should be or thinks it is. Instead it's exasperatingly shallow, too self-conscious of its own curdled and cynical cleverness.

On the morning of his fifth wedding anniversary, Nick Dunne (Ben Affleck) returns home to find his front door wide open, his living room in disarray, and his wife missing. Detective Boney (a terrific Kim Dickens) and Officer Gilpin (Patrick Fugit) suspect foul play but are divided as to what might be going on. Gilpin is sure that Nick is the culprit. Boney is troubled by the obviousness of the clues. Things explode outward from there.

You see, Nick's wife, Amy (Rosamund Pike), was the child inspiration for her author parents' bestselling series “The Amazing Amy.” Predictably, media attention goes into hyperdrive, the community comes together in search for Nick's wife, and cable news pundits (thinly veiled parodies of Nancy Grace, et al.) start beating the drum that the husband is probably the murderer. And as more and more details about Nick unravel, it's easy to see why. The more we learn of the guy, the less we like him. So did Nick kill Amy? And if so, where's the body? And how does Amy's creepy, rich ex-boyfriend (Neil Patrick Harris) figure into everything?

Using flashbacks, pathologically dishonest characters, and unreliable narrators, Gone Girl frantically (sometimes ridiculously) spins its diabolical web of deceit and misanthropic view of marriage with giddy excess. Almost every character is a liar or a dupe. Sometimes both. Every plot twist realigns the facts or corrupts what we already know. People can't be trusted, and wedlock is a withering lie of convenience. It's Basic Instinct meets Scenes From a Marriage.

When Fincher is at the top of his game, he takes tales of human misery and gives them a wicked, almost ironic, sense of humor while challenging audiences to find cathartic release. Fight Club was a cruel but clever dissection of masculinity, Se7en and Zodiac were brilliant and unforgiving deconstructions of the serial killer myth, and The Social Network reveled in the brutally incongruous, antisocial inspiration behind Facebook. Even The Game, a lesser Fincher effort to be sure, embraced its Hitchcockian roots while confronting the fragility of the male psyche.

Gone Girl, much like Fincher's adaptation of The Girl With the Dragon Tattoo, is more akin to an expertly crafted, especially long commercial for the source novel. Plot mechanics are everything here, and while author Gillian Flynn has done a respectable job of adapting her own wildly successful and, no doubt, difficult-to-translate best-seller, the novel has been gutted of its impish wit and delightfully murky morality. There isn't much to interpret or expand upon here, as Fincher mostly puts a artful polish on Gone Girl's 150 minutes of tightly wound, if somewhat tiring, storytelling.

Affleck is a good fit for his blandly handsome, too passive protagonist, delivering a convincing mix of clueless selfishness and wounded naivete. Pike, who will no doubt be complimented for the layers of character she must revise and reveal, delivers the meatiest performance of her career. But it's all for naught because there's no getting around the fact that, onscreen, these characters come off as literary constructs rather than flesh-and-blood people. The actors can only do so much when their dialogue and motivations are so writerly in construction and conversation. That said, rare is the film that I will compliment for Tyler Perry’s acting. But as a celebrity defense attorney, Perry proves that he's a solid supporting player.

Questionable gender politics aside, Gone Girl certainly has the pedigree and craft to involve, leaving audiences to buzz with conversation for five or 10 minutes after its open-ended finale. But beyond that, its too-blunt, he-said/she-said tale of murder and marriage isn't provocative enough to be memorable nor wickedly pointed enough to be fun.

Gone Girl is rated R and has a run time of 149 minutes.