Harbingers of the beat 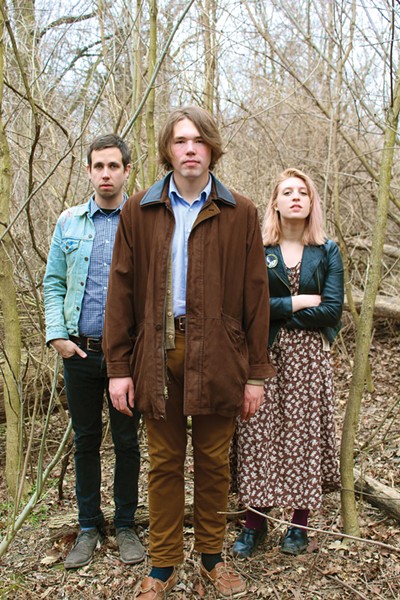 It is an oddly warm night in early March as Metro Times sits down with Deadbeat Beat. Polls for Michigan's presidential primary closed a few hours earlier, and band mates Alex Glendening, Zak Frieling, and Maria Nuccilli watch the results glow from the television in the Woodbridge house where the band practices and Glendening and Frieling live.

After a few bewildered minutes watching Donald Trump's victory speech, we convene in Frieling's top-floor bedroom to discuss the trio's new tape, their upcoming show with Tacocat at Marble Bar on April 9, and their long and winding histories in the Detroit music scene.

"I feel like we were just on a vision quest for the past four years," Nuccilli says.

Early last year, Nuccilli and Glendening linked up with Frieling, ending a yearslong streak of rotating members, and got down to business booking shows and releasing their first album in four years.

The result, Only Time Will Tell, is a collection of catchy pop songs with garage rock energy, '60s singalong choruses and fuzzy, post-punk guitar that echoes for days. The album was self-released in November. A surf rock element, though perhaps not as prominent as on previous records, is never far off, its unmistakable party vibe rising through the noisy agitation.

"A lot of people like it. Way more than I thought would," says Glendening, who formed the band in 2009 with Nucilli and former member Josh Gillis.

"I think we like it a lot more now than if we would have put it out then, because we had time to sit on it and be like, 'Oh, it was actually fine,'" Nuccilli says. "I mean, 'Time to sit on it' is an understatement."

The songs, which were recorded in 2012, sat mostly dormant following the departure of Gillis, who played guitar and bass, and whose vocals can be heard on the song "Tin King." Immediately before Gillis' move to Nashville, Tenn., the band went to the studio to record the material they had.

Nuccilli says you can hear the band's momentum on the tracks. "In terms of capturing a performance on the record, my favorite song is 'When I Talk To You,'" she says. "That's one of the songs we wrote right before we went into the studio and we had really good energy. That's why we were like, 'OK, we need to book this time now.'"

After Gillis' departure, Glendening and Nuccilli spent a year or so playing with bassist Neil Laperriere, as well as other bassists. At other times, they played as a two-piece.

"When a very core band member leaves, you kind of just don't know what to do," Nuccilli says. Glendening agrees. "We got the wind knocked out of our sails a little bit. We ended up sitting on the material for a while," he says.

Renewed interest in releasing the songs came when Frieling, formerly of the band Kommie Kilpatrick, joined in early 2015. "Before I was in the band, they were my favorite band," Frieling says. "So part of it was that I wanted to hear these songs."

Frieling already had a longtime friendship with Deadbeat Beat; Kommie Kilpatrick frequently performed with them, and were also avid cover band collaborators.

"Here's what's weird," Glendening says. "The first Deadbeat Beat show, Josh couldn't make that cause he had to work, so Maria and I played all of our songs as a two-piece and then we had Zak join us, and we played the entire Annette's Got the Hits EP by Redd Kross."

When I Talk To You, Deadbeat Beat's 2011 debut album, was also released on Frieling's label, Gold Tapes, in 2011. Other acts that have released tapes through the label include Kickstand Band, Protomartyr, and the Hard Lessons.

"Zak's gone beyond simply songwriting," Nuccilli says. "He just has a different brain than me and Alex. He's really good at making sure we have T-shirts, responding to emails, keeping us in check. I mean, Alex and I had gotten this far being ourselves ... "

Glendening says: "But I'm kind of like a kid with the backpack that's also a leash."

As far as appropriate headliners for Deadbeat Beat to support, Tacocat is spot on. The brightly colored feminist pop-punk band from Seattle — with songs names like "Crimson Wave" and "UTI" — ups Deadbeat Beat's party ante while turning the focus to hilariously celebratory odes to menstruation, vacations, and candy. And the two bands have already partied together.

"It was 2011 — I had found them on YouTube a couple years before that — but they posted online that they were looking for a show, and I was like, 'Oh, I've got your show in Detroit,'" Glendening says.

Glendening booked them to play in the basement of the house where we're now sitting. "It was the only time I've ever gotten a keg," he says. "It was a party. We ate French onion dip and listened to records. Lelah, the drummer of the band, had a tall tee on that was a bikini sexy lady and she was spinning in circles and she would stop and be like, 'This song is genius!'"

A few years later, Tacocat returned for another show and stayed with Glendening at his house in Hamtramck. Since then, the band has seen a growth in popularity, moved to Hardly Art Records, and even wrote the new Powerpuff Girls theme song.

"They're super famous now," Glendening says. "Who knows what's in store this time. I'm hoping they have a hotel I can go to."

There's an approachable, cheeky vibe to many of Glendening's lyrics; a conversational feel much like what a friend might whisper at a party of mixed company. "When I talk to you, it's immediately worse/ You thought I was cool or hard, but I'm just a jerk," he sings on "When I Talk 2 U." Other times, like on the shoe-gazing epic "I Wonder," he serves up irony-tinged existential dread. "I wonder when that tree falls down onto me when there's no one around/ Am I dead? Did it make a sound?"

He's not too keen, however, to pinning his songwriting to any one — or two, or 10 — specific influences. "I don't think I ever wanna sound like one thing for too long," he says. "I like the idea of each song being able to stand as its own, because I don't feel like in, whatever year we're in, we have to have a strict genre when we have access to so many different things."

When asked about their collective influences, the answers are similarly hesitant, though Wire, La Dusseldorf, the Velvet Underground, Television, and My Bloody Valentine were all mentioned.

"I love the Byrds," Glendening says.

"I forgot how much we love the Byrds," Nucilli says.

Nucilli and Glendening's musical partnership began more than a decade ago, at the 2003 Grosse Pointe South battle of the bands. They've been making music in one band or another ever since.

"We're both only children, so it's like we're the (only) built-in brother and sister that the other has ever had," Nuccilli says.

When it came to learning drums, Nucilli started playing simply to be in a band with Glendening. "Alex and I used to have to write out all our songs in like, weird twin language. You know, our own weird notation," Nucilli says. "I remember I taught myself how to do a drum fill because Alex and I wanted to cover 'Down on the Street' by the Stooges and there are a bunch of drum fills in that song, so I had to learn how to do a drum fill. That's still my go-to fill a decade later."

They formed their first band, the Decks, with bass player Hank Wolfe and guitarist Johanna Berger in 2003. Their early shows took place at many still-standing venues, such as the Majestic, Small's, the Belmonte, Paycheck's, and also some that no longer exist, including Hamtramck's Chill and Mingle Nightclub and Mephisto's.

"Mephisto's! We played there for a Metro Times-sponsored book-burning event that featured a stripper with dollar bills as a skirt, Glendening says. "We played while they projected the Paris Hilton sex tape behind us while we were all underage.

"Let me tell you, I love playing bad shows. Shows that are in places they shouldn't be. Most people hate it. I just love it."

The Decks kept at it until 2009, when Wolfe moved to Atlanta and their guitarist at the time, Molly Jean Schoen, started playing more with a different band. "We just immediately started working on new stuff and trying to form an updated version of ourselves," Glendening says.

Over the years, Deadbeat Beat hasn't been anyone's sole music project. Glendening has been involved with many other bands, including K-9 Sniffies and Twine Time.

"It's a restriction that forces me to really listen to my band mates and consider what I, with only two drums, can add to the song," she writes in a follow-up email, adding that she draws from that mindset while playing with Deadbeat Beat. "I hope it makes me a more deliberate, creative drummer when I return to a full kit."

Perhaps not surprisingly, Nuccilli's drumming influences pose a similar dichotomy. "They might seem like polar opposites, but Mick Fleetwood and Moe Tucker would be, I guess, my two main influences," she says. "One person had like no drums or just some garbage cans, and then the other had a million drums and two tiny splashes."

Frieling's music life outside of Deadbeat Beat is also quite different. Kommie Kilpatrick, for which he did the majority of the songwriting, was a punk band in the spirit of Black Flag, the Stooges, and the Zero Boys. "Those songs were all very short, typical punk pastiche, more confrontational," he later writes. "Whereas, Deadbeat Beat, in my opinion, have very insightful, poetic, autobiographical, but still universal lyrics, and much more complex song structures."

The bands started in much the same way, says Frieling.

"In both of these bands, we were all good friends first, and bands second."