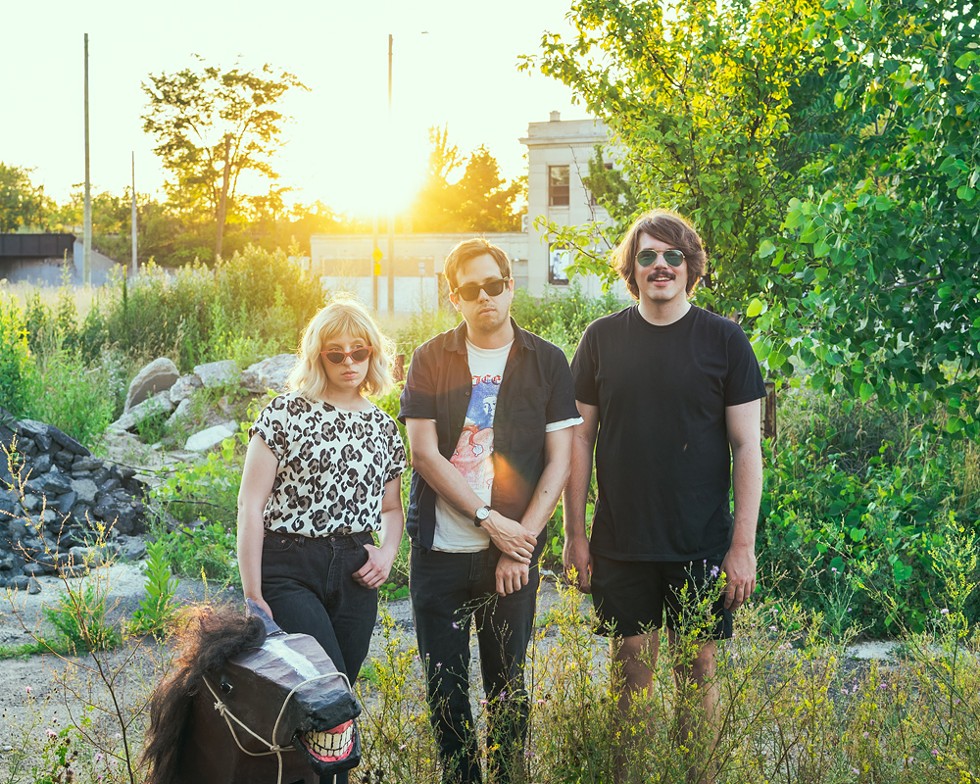 Ask the members of Detroit rock 'n' roll three-piece Deadbeat Beat to describe their music, and there's no simple answer — partially because they each string along additions to each other's answers.

Drummer Maria Nuccilli says that she "would love to hear someone else's analysis of our songs," while singer and guitarist Alex Glendening follows with "to me, they're completely normal." Bassist Zak Frieling speaks as someone who wasn't in the band at first, saying "it definitely doesn't come off as different if you're just listening," but that he quickly discovered all the songs' nuances once he started performing them.

Nuccilli is still amused by the memory of an older audience member at a show drawing loose parallels between the band and King Crimson. Frieling, who joined the group four years ago, gives credit to Fleetwood Mac, later in our conversation, for building an unbreakable bond between the three of them. But Glendening, the band's primary songwriter, says he's "less interested in fixating on having a 'this-type' or 'that type' of song; no matter what I'm informed by in a given moment, it's always through my lens, and I don't think I push something. I like to hang in some sort of mixture, a gray area."

"I feel like the songs have gotten more... I dunno... unique?" says Frieling. "The things they might be drawing from are still there, but it's been less clear that 'this song' is a 'garage song' or 'that song' is a 'surf song.'"

And right there, Frieling pins down the three words you'll often read being thrown around about Deadbeat Beat by music writers: "surf," "garage," or, more accurately, "pop." But we (and by "we" I mean this amorphous and squirrelly modern generation of music writers) can't let it lie right there — Deadbeat Beat's music can't just be pop, even if it's catchy as hell, with melodies like kites caught in a summer breeze and rhythms that rollick and propel a listener's weary spirit back into a sense of exuberance and adventurousness, while the lyrics, albeit sprung from personal experiences, capture a completely relatable sense of the human experience.

But it still can't be just pop; music journalists have to think up further-wrought word-soup composites that add on vague adjectives like "indie," or "surf," or "punk," or throw in qualifiers like "jangly" or "sunny" or any other hurried splash of descriptors in order to drive home Deadbeat Beat's knack for making musical aesthetics that feel both winsome and wistful; heartwarming and heartbreaking.

You can make your own determinations for yourself when How Far, the band's long-awaited second full-length record, drops on Aug. 2 with a release party on Saturday.

This writer, meanwhile, has long been listening to the music made by Glendening and Nuccilli, and has been describing, or attempting to describe, the clear-cut charisma and straightforward sweetness sewn into their slightly askew approaches to an otherwise unambiguously categorized strain of pop-rock.

The duo's story goes back to 2002, in the Grosse Pointe public school system, where they met in middle school as creative, kindred-spirit, music-loving teenage fans of arty icons like the Velvet Underground and Television (and, eventually, Fleetwood Mac). Nuccilli had played other instruments like piano in her youth, but knew she wanted to pursue drums once she learned that Glendening was already playing guitar.

"Because what else are ya gonna do?" she says. "You can't have a band if you don't have drums."

It wasn't long before two 13-year-olds were "busking" in front of shops in The Village of GP.

"It was fine..." Glendening appraises.

"We were just annoying," Maria admits.

"It was just fun to be annoying," Glendening continues, "which is still 'the model.'" 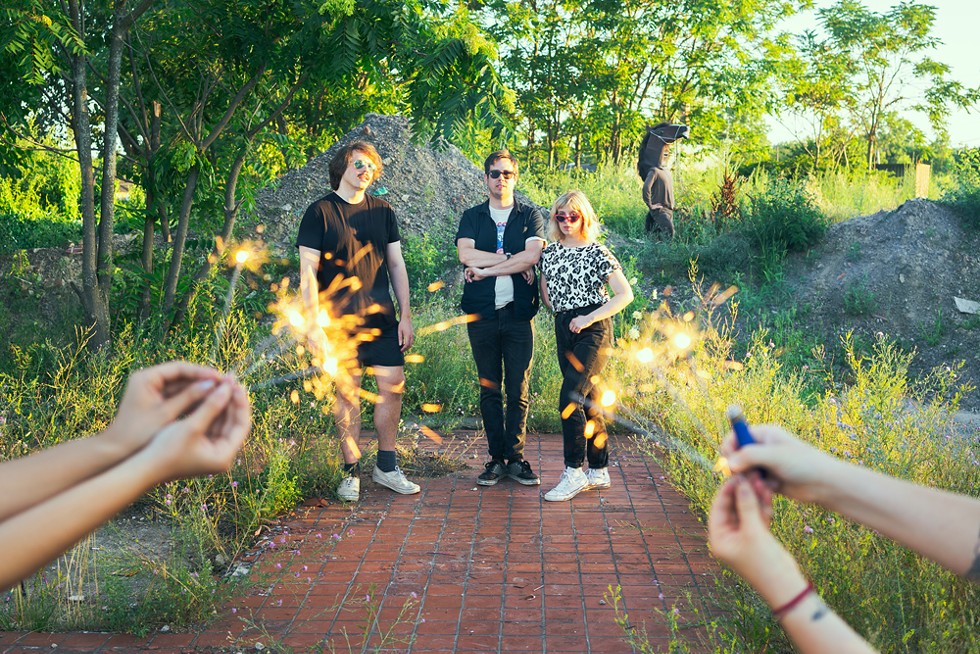 Glendening says he was already writing songs as young as age 13, but assures that no one should ever hear the recordings he made in his bedroom. Nuccilli's family, meanwhile, came over from Italy in the early half of the 20th century, bringing a considerable musical pedigree, including a grandfather who played violin, but secretly wanted to play the drums all along. It was that unfulfilled dream of her grandfather's, as well as her early admiration of the VU's Moe Tucker, that got her enthusiastic to start playing drums.

Glendening remembers Nuccilli coming in to school one day in 10th grade extolling all the tricks and techniques of drummers she'd been reading about, like CBGB's-era Billy Ficca. Frieling chimes in, then, adding that Ficca would go on to join the Waitresses. (Not only is Frieling Deadbeat Beat's bass player, he's also subtly a walking Wikipedia page for tidbits of music history like this.) Nuccilli adds that she definitely resisted her late mother's attempts to push her toward the oeuvre of Phil Collins, but confirmed that she has recently become quite an unabashed Genesis acolyte.

So to make a long story a bit shorter, Nuccilli and Glendening have been making music together for more than half their lives, had a full band by 10th grade, and started playing around the local music scene as early as 2005 in a four-piece known as the Decks. Fluctuation has been a navigable reality for the band, rolling through high school and college, as well as rolling their way through the Great Recession, it was inevitable that former members moved away for either college or for greener pastures, job-wise. As their sound evolved, they changed to a three-piece, and changed their name to Deadbeat Beat in 2010, which included bassist Josh Gillis.

"I remember first seeing you at Dally in the Alley in 2006," Frieling says to his mates.

Frieling grew up around the Flint area, teaching himself to play along to records by the Stooges and the Ramones. He can make his way on guitar and was also the drummer for a now-defunct hardcore punk band called Kommie Kilpatrick, but he just started getting closer to Glendening and Nuccilli, as friends' circles merged between their day-job/night-music existences between rental spaces in Ferndale, Midtown, and Woodbridge. (And they all accurately recall the long-gone reasonable rates they were paying for their various former abodes.)

"But everyone's always got other shit going on," Nuccilli says.

No truer words could be said for Deadbeat Beat. The band put out its first LP, When I Talk to You, nearly a decade ago on Frieling's cassette label Gold Tapes in 2011, but they've been balancing that with finishing up college and/or going back to college, checking in for day jobs at spots like the Wayne State libraries or the DIA, and playing in other bands like Tyvek (Glendening) and Outrageous Cherry (Nuccilli). Everything continued to be DIY up until now, and continues to be so, as the band has been diligently plotting out stops for the tour that starts after this weekend's album-release party. Their road trips have steadily proved beneficial, building fan bases in cities outside of Michigan (like Columbus and New York) and building friendly bonds with other indie-rock bands, like Seattle's Tacocat.

‘It was just fun to be annoying, which is still “the model.”’ tweet this

Deadbeat Beat recorded its album in the basement studio of Detroit-based musician and engineer Jeff Else. It wasn't done in a hurry, sure, but they all feel that it benefited from being allowed to, as Nuccilli put it, "breathe." There was also a lot of input from singer-songwriter Fred Thomas (of Saturday Looks Good to Me). Thomas has collaborated with dozens of artists over the years, and he was the first one, besides Else, to hear the recordings; he would wind up mastering it for the eventual finished product for Arrowhawk/Crystal Palace Records. Arrowhawk Records in Athens is handling the digital release, with Detroit-based Crystal Palace distributing the vinyl editions; the latter has also done releases with Double Winter and AM People.

But in terms of the song creation process, as Glendening stresses, "the vibe has to be there" before any song can go past the earliest stages of jamming around an idea that he or the other members bring to their table. And then they figure out where their parts go — with Frieling adding that Glendening's background in music theory allows for an all-options-on-the-table when it comes to things like key signatures and timbre. Of course, Glendening then immediately downplays that stint of studying theory, but still: First vibe, then arranging, then melody, and then lyrics. Lyrics often come last, and Glendening is hoping to get a bit more "oblique" with later songs' subject matters and diary-esque anecdotes. But eventually, a Deadbeat Beat song comes together.

And it's often with the drums and bass following the guitar. That's how it's been since the earliest days, where most drummers lock in with bassists, Nuccilli was often playing with just Glendening. "I learned how to play drums with you, while you developed your solos with me," she says directly to Glendening. "And (I developed) 100 percent of my songwriting skills (with Maria)," says Glendening. He also adds how much he loves Frieling's basslines: "Zak's basslines make me look better," and they all chuckle.

Glendening sings lead and writes a lot of songs, but all three of them invariably take the lead, in a sense, and not just in the vocal contributions of Nuccilli. "Alex is definitely the creative side of the band's brain," Nuccilli says. "But it's nice that Zak and I can split up—"

"Yeah, the boring stuff," she says. "We divvy up that side of things, as well as the visual side — photos, album art, flyers, etc."

A lot has changed, obviously, around Detroit since Glendening and Nuccilli were in 7th grade. But Frieling focuses on one of the biggest positives: venues. The band is heading out soon for two weeks, to as far away as the West Coast this time.

"From touring a lot and seeing other cities, it's always clear how unique Detroit is," he says. "Sometimes, if the one cool bar in another city is booked up, you're out of luck — whereas, Detroit has so many nice venues. We love UFO Factory and Outer Limits Lounge, but there's also Trixie's, Kelly's, the Lager House, Trumbullplex. Detroit is lucky, because a lot of cities don't have more than more than one" venue for indie and DIY artists, he says.

As the interview concludes, it's evident that there's a glow about the band, possibly because we're inside the UFO Factory — this spot in Corktown is like a second home to the band. But really, likely, they look and feel at home simply because they're in each other's company. The vibe is there.