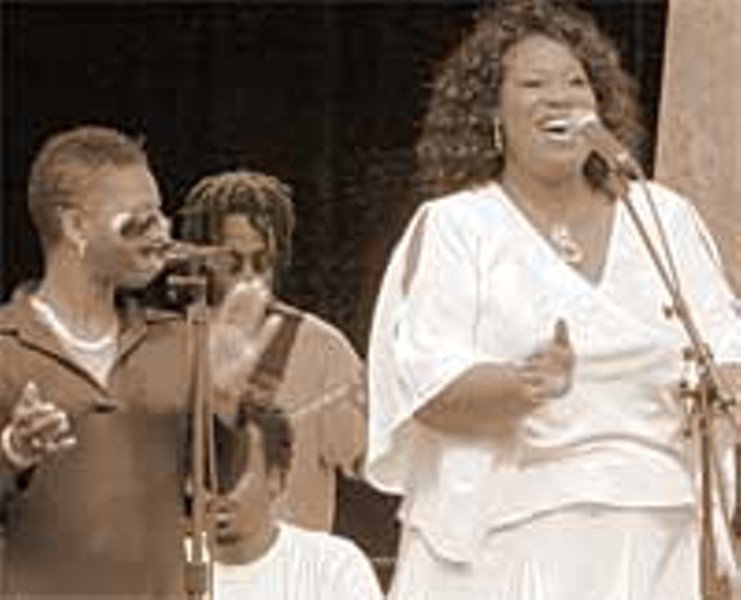 Bouncing back after three days (well, five days, counting two nights of pre-fest parties) of Fuse-In mayhem isn’t easy, even for, uh, "pro" scene-crashers like us. It’s all too much, to paraphrase our favorite Beatle.

At Campus Martius, blocks away from where Detroit’s Memorial Day weekend electronic music festival was held at Hart Plaza, the rumble of low-bass drones could be felt in the chest. On the 32nd floor of the Marriott Hotel, we put our ears to a vibrating window and listened as Green Velvet and Stacey Pullen (from this distance looking like insects behind the decks) hammered away on the Main Stage. Later, behind the Main Stage, we jostled with photographers, videographers, friends, family members and hangers-on there to see Octave One and Underground Resistance, two legendary Detroit crews, playing live sets. We glided down the ramp to the Underground Stage, where we caught a blissful, mercifully pitched-down live performance by Diji & Deadbeat, who used a laptop computer, treated guitar and a mixer as tools to both relax and elevate the crowd. At the Waterfront Stage, the venue for nu-soul, abstract Detroit techno and hip hop all weekend, we caught rappers Sleeper Cell and Wasted Youth, a cranky but still-superb DJ set by Houseshoes, a funky blend of house and soul from Diviniti (featuring three female singers and full band, including a horn section) and 21st century tech-house from DJ 3000 and John Tejada. Across the plaza at the MusicLogical Stage we witnessed an international takeover of the tent by the Dutch (Orgue Electronique, Legowelt and Luke Eargoggle), the Germans (Apparat and Phon-o), the Poles (Highfish and Jacek Sienkiewicz), the Italians (Marco Passarani and Alexander Robotnick, though we missed

The overall ambience of Fuse-In resembled the first Detroit Electronic Music Festival in 2000. It had a real from-the-seat-of-our-pants feel. It was less a festival than a sequence of on-site and off-site parties, held together by an endless stream of pounding music. Organizer Kevin Saunderson, who appeared confident and relaxed in the days leading up to the festival, looked tired and anxious throughout the weekend. He was worried, he said, that lower, more realistic attendance figures would be misinterpreted by the public. Although just over 41,000 fans paid to get into the event, the crowds seemed only slightly down from previous years, when festival and city officials came up with estimates that exceeded 1 million people.

But some changes should be considered, including organizing the whole show much, much sooner and announcing the lineup in time for out-of-towners (so necessary to sustain Detroit’s rightful place as a historical foundation for techno) to make plans to get here. Detroit residents also need to be honored by festival organizers by allowing them free family access to the entire festival. Why not? It would be a gracious step that would also help sell a scene that still has image problems. If only a fraction of Detroit kids came away from this event with a newfound appreciation for John Collins, Bruce Bailey, Mike Huckaby and so many others, it would be cause for celebration.

Speaking of celebrating, Fuse-In provided a number of highlights that made us stand up and shout. It also had its share of disappointments and lukewarm moments that fell in between. Here then is heaven, hell and purgatory as seen from the concrete dance floors of Hart Plaza.

1) The last three hours of closing night, when the bowl in front of the Main Stage was wall-to-wall people for Underground Resistance and Mos Def (with a DJ only), whose calls for "freedom" in the final moments of his song "Umi Says" seemed like a perfect lullaby on a beautiful spring night; and then experiencing a rapid drop in temperature when going deeper into Paxahau’s Underground Stage, where Richie Hawtin was slinging maximum minimal techno in front of thousands pressed so close together they seemed to move only as one undulating mass.

2) The Michigan sky, the gravity of Detroit’s downtown architecture, the power of the river — all complemented the event.

3) The consistency of Soft Curls’ programming at the MusicLogical Stage, which brought the freshness of new talent to the festival.

1) Putting Hawtin, one of the world’s biggest electronic music stars, in the cramped Underground Stage was ill-advised and potentially lethal. Security personnel necessarily prevented hundreds of people from getting close enough to experience the performance.

2) There was little flow to the overall programming of the festival. People tended to stay at one stage without checking out talent elsewhere. It appeared that if fans were there to see the Europeans playing the MusicLogical tent, they’d rarely drift over to the Waterfront to see house or funk performers.

3) The number of cancellations was troubling. Several notables who were on the schedule — including Kenny Dixon Jr., Cobra Killer (who was to be the final act on the MusicLogical tent on closing night), Peter Grummich (visa problems), Sten (equipment trouble) and Jan Jelinek — were all no-shows.

1) Juan Atkins and Model 500 started slowly, bickered with the sound guy, then forgot about it and kicked into gear. The overall performance was spotty and frustratingly short.

2) The Underground Stage banged hard nearly all weekend, but a full Sunday of sonic punishment from New York’s Tronic crew got to be a bit too much.

3) The Marketplace was vibrant and offered a fair amount of stuff, from Pure Detroit clothing to Record Time vinyl. But the whole scene was too goddamn loud, with sound collisions occurring at almost every step. There was no escape, except to run back to one of the stages, where the levels were set with more care.

The Subterraneans is a biweekly column devoted to dance culture. Send comments to letters@metrotimes.com