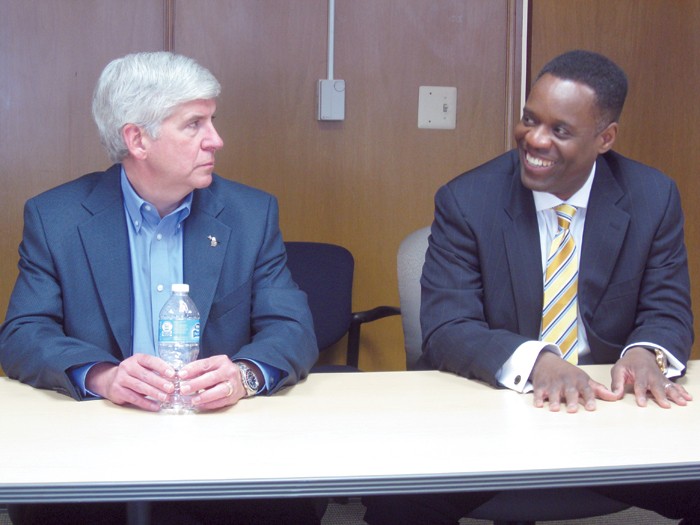 Detroit Emergency Manager Kevyn Orr, for one, applauded the decision.

“Today’s ruling is a victory for Detroiters that will help the city reinvest in the services it provides its residents and businesses,” Orr said in a prepared statement. “We’re making good progress in reaching consensual resolutions with our creditors and stakeholders.”

Added Judge Rhodes: “The amount of the settlement is entirely reasonable and fairly compromises claims of the parties.”

The implications of this ruling extend far beyond the $85 million settlement, but let’s start with that.

The two banks — UBS and Merrill Lynch Capital Services, which is a division of Bank of America — claimed they were owed about $288 million in a deal that dates back to 2005. At the time, in a scheme designed to circumvent state-imposed debt limits, the city borrowed $1.4 billion to shore up its two pension systems. In a side deal linked to the loan, the city essentially made a bet that interest rates were going to rise. Instead, when the economy tanked in 2008, interest rates fell to almost nothing, and the city has been paying for it ever since.

In 2009, when the city’s bond rating was downgraded, that so-called “trigger event” put the banks in a position where they could demand full payment immediately.

To avoid that, the city pledged a portion of its casino tax revenue as collateral. Since then, it has paid the two banks about $300 million.

Attorney Jerome Goldberg, who represents retiree David Sole in the bankruptcy proceedings, attempted to get the judge to focus on that $300 million.

Rhodes, however, deemed the $85 million settlement a good deal for the city.

Part of the agreement, which has been overlooked or downplayed by most others reporting on the issue, grabbed the attention of Wallace Turbeville. It involves the aforementioned lawsuit the city filed earlier this year challenging the legality of the $1.4 billion loan involving something called Certificates of Participation, or COPs, which are similar to bonds.

A lawyer and former investment banker at Goldman Sachs, Turbeville is now a senior fellow at Demos, a left-leaning nonprofit “public interest” organization based in New York City.

“UBS and Merrill Lynch are said to be released from any potential liability under the original $1.4 billion COPs deal,” Turbeville wrote in a blog published before Judge Rhodes approved the swaps settlement. “Remember that Orr has sued to void that deal as an evasion of legal limits on debt. The senior managing underwriter of the COPs deal was UBS, and Merrill Lynch was among the co-managers. Typically, the managing underwriters play a leading role in structuring municipal financings. It is entirely possible that UBS and Merrill Lynch thought up the COPs deal and pushed it with the city. No one familiar with the municipal finance business or with the corrupt city administration at the time would be shocked if the managing underwriters used (shall we say) extraordinary means of persuasion to secure the lucrative deal. …

“Maybe this settlement is not nearly as good as it appears for the city.”

“Judge Rhodes should require a full airing of everything Orr knows and can find out about the possible liability of these banks in connection with the dodgy COPs transaction,” Turbeville urged. “Otherwise, he cannot possibly assess whether the settlement is in the interest of the beleaguered people of Detroit. Shedding light on the COPs deal would benefit Detroit and inform the public of bank practices used when they underwrite the debt of states and localities around the country.”

But that didn’t occur.

Instead, the judge chastised those protesting what’s been happening in bankruptcy court, and called for an end to the “orchestrated public relations campaigns in an effort to advance their position.”

As part of the deal, the two banks agreed to go along with Orr’s so-called “plan of adjustment.” That’s of crucial significance to those who continue to oppose it, especially the retirees receiving pensions and current city employees who hope to receive one someday.

Because, under bankruptcy, if one class of creditors agrees to the plan, the city can ask for, and the judge can approve, what’s known as a “cramdown.”

Ideally, the intent of a Chapter 9 bankruptcy such as the one Detroit is going through, is to arrive at some sort of deal that a majority of all involved can agree to. Arriving at that point, however, can be incredibly difficult and time-consuming.

With a cramdown in effect, the process is essentially streamlined.

The message to retirees was clear: Cut a deal while you can.

“The city’s $18 billion debt load is suffocating, and the longer parties wait in hopes of a better deal, the more dire our collective situation becomes,” Orr warned in his statement. “I reiterate Judge Rhodes’ request that all parties negotiate and reach resolutions. We don’t have the luxury of time — the offers on the table are grounded in reality and they won’t last forever.”

Curt Guyette is an investigative reporter for the ACLU of Michigan. His work, which focuses on Michigan’s emergency management law and open government, is funded by a grant from the Ford Foundation. You can find more of his reporting at aclumich.org/democracywatch.