You can forget the Motor City — Detroit has plenty to offer the cycling enthusiast. 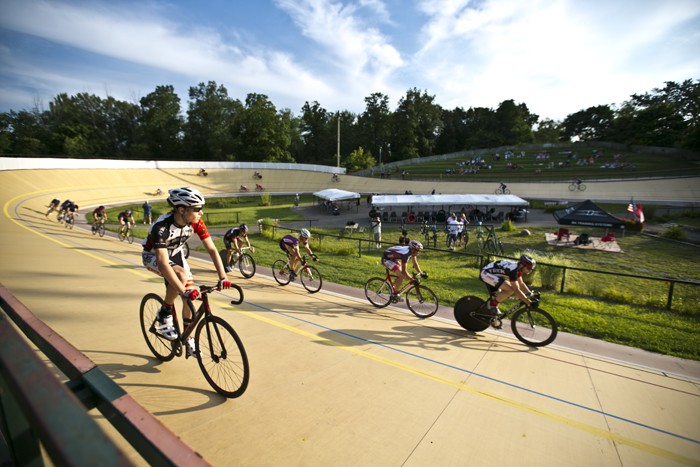 Spring is here, and that means it’s time to push those pedals. Fortunately, despite the whole car thing, Detroit has plenty to offer the cycling enthusiast. Here’s a roundup of places to bike, places to be, and some shops to take a look at.

This 250-meter concrete velodrome — built by noted Michigan cyclist Mike Walden in the ’60s — was in rough shape when Detroit’s vigilante Mower Gang stumbled upon it a few years ago. After some excavation work, the velodrome is now open for cyclists. Years of illegal car racing have wreaked havoc on the track, but intrepid cyclists are free to give the rough course a ride. The park also hosts a Mad Max-themed Thunderdrome motorbike racing event once a year in the fall.

For a more, shall we say, structured velodrome outing, Bloomer Park in the suburbs is the place to go. The track’s in much better shape than Dorais, your bike needs to meet specifications to be allowed on the track, you have to wear a helmet, and there’s an entrance fee (though your first time is free) — but the track is the only one of its kind in North America. The velodrome opened for the season last Saturday.

Opened in 2009 in what used to be a sub-surface Grand Trunk Railroad line, the Dequindre Cut Greenway is a 1.35-mile long strip with separate lanes for pedestrians and bicyclists and has plenty of room for everyone along the 20-foot-wide paved pathway. Street art murals decorate the remainder of the concrete overpass — the Cut is a scenic route where rural meets urban.

The numerous beautiful trails that stretch out from Kensington Park always draw visitors, thanks to the paved, 8.5-mile path lined with hills, inclines, and miles of panoramic views surrounding picturesque Kent Lake.

Like its name implies, this is a low-key weekly bike ride that draws a few hundred people for a scenic view of the city. Typically, a group meets at a different place (like Eastern Market or the Old Shillelagh — check the online schedule), heads around to a few neighborhoods, then concludes the evening over drinks and food.

The Detroit chapter of this international group meets up at 6:30 p.m. on the last Friday of every month. While the original Critical Mass was a protest against city streets that are unfriendly to bicyclists, today the group is merely concerned with getting a bunch of people together to ride around Detroit. Sounds like a good cause to us.

This cycling nonprofit based in Detroit is known for its large seasonal bicycling events. Tour De Troit’s main mission is to get people to see the historical sites in the city while raising awareness of biking as a mode of transportation. They get city dwellers out of the gloom and into the sun — to top it all off, proceeds from the events go toward building better non-motorized infrastructure in the city of Detroit for cyclists on the road.

These guided tours offer a specific look from a different angle of the city — the site currently has a schedule for tours structured around different themes showcasing architecture, Motown, street art, and more. Each tour has a fee, ranging from $20-$45 depending on if you need to rent a bike or not.

No leisurely bike tour, the MBRA is Michigan’s official branch for U.S. competitive cycling. The MBRA boasts over 1,600 members who compete for points, fame, and in some races, cash prizes. This is the real deal. The group’s races are certainly accessible to newcomers — new cyclists who are up to the challenge must pay the entrance fee (offered annually or per day) and make sure they have a bike that meets the group’s specifications. Various races are planned through the summer, so check their website for more information.

Though details aren’t firm yet, a criterium (a shorter race) is planned for Belle Isle this summer. The event started in 2011 but has been absent from the local cycling scene for the past couple of years.

A weekly ride lead by women. Rides are typically 10 to 15 miles long. Men can join if they come with a lady.

The Hub is a retailer, a repair shop, and an advocacy organization. Donations make it possible so the Hub and its partner, Back Alley Bikes, can continue teaching kids how to fix bikes and to help with Detroit’s growing cycling community.

Owner Jon Hughes comes from a long family of cyclists (his father, Dale Hughes, designed Bloomer Park’s velodrome; Dorais Velodrome designer Mike Walden is his grandfather).
When you visit this Ferndale store, repair center, and cyclist community center, you’re in the wheelhouse of someone with a passion for bicycling. Tuned into the craze for simple-yet-stylish retro single speeds and fixies, the shop offers a great supply of affordable options.

Wheelhouse’s location (now open for its seventh season) makes it a great place for a service pit stop while biking the riverfront. Bikes are available to rent if you don’t want to fuss with a bike rack, and they also sell the Detroit Bike Company’s A-Type, which is manufactured here in Detroit.