Detroit has a million myths — and some are even true! 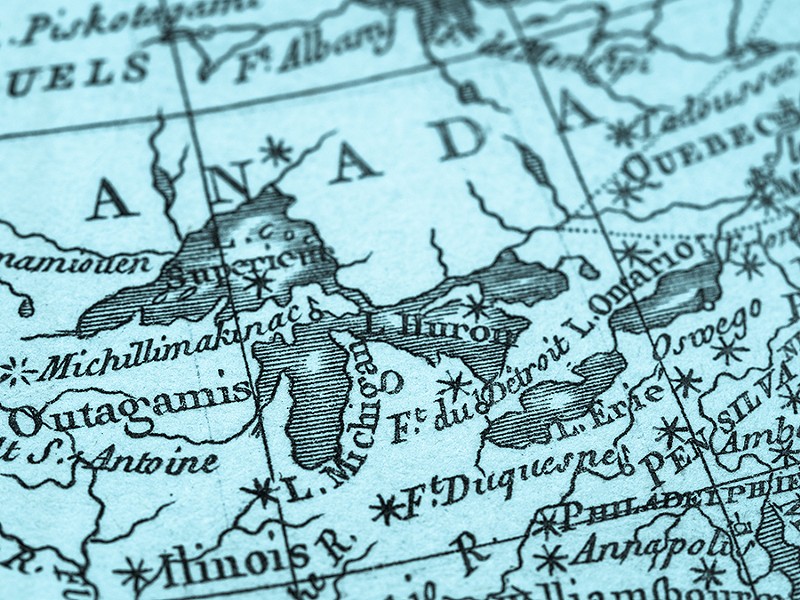 The Nain Rouge was a red devil, horns and all: False

Nobody ever said anything about the city's mythical bearer of bad news being a devil. The actual English translation of the French "nain" is dwarf, not devil. In fact, we might almost think of him as looking less threatening than, say, the Vernor's gnome. Nevertheless, the folkloric figure often crops up in modern interpretations as an adult-sized demon.

There was no slavery in Michigan: Not so fast!

In metro Detroit, we're used to thinking of slavery as something that took place far away among the plantations of the antebellum South. After all, Detroit was the last stop on the Underground Railroad, a magnet of the Great Migration, and eventually became the sophisticated Motown of the civil rights era. But it wasn't always that way, as University of Michigan history professor Tiya Miles makes clear in her new book, Dawn of Detroit. From roughly 1760 to 1815, not everybody was free, and Native Americans, Africans, and indentured servants were considered the property of some of Detroit's first families. Slavery was technically against the law of the land, so terms such as "indentured servants" were used, incorrectly, to describe these people kept in legal bondage.

Belle Isle was designed by Frederick Law Olmsted: Not so fast!

Frederick Law Olmsted was a righteous dude. He was the designer, journalist, social critic, and public official whose role in creating such green spaces as Manhattan's Central Park, Brooklyn's Prospect Park, and San Francisco's Golden Gate Park have helped him earn the title "the father of American landscape architecture." And so it makes sense that people want to credit him with the design of our island oasis. In fact, Olmsted did create a design for the park in the 1880s, but only parts of it were incorporated into the park's layout, and its design has changed with a changing city. In its 1940s heyday, it was more like an overcrowded fairgrounds than an urban oasis, and during the Cold War it even sported underground missile bases. These days, half the park is closed in the springtime when crews set up for the screaming, high-speed IndyCar races of the Detroit Grand Prix.

Detroit's street design is based on the layout of Washington, D.C.: Almost completely false

Popular Detroit Mayor William C. Maybury once said: "Few Detroiters are aware of the fact that after the great fire of 1801, this city was laid out according to the original plans of Washington, D.C." Actually, the good mayor got his facts wrong: The fire was in 1805, and the original Woodward Plan, named for its designer, territorial judge Augustus Woodward, no doubt borrowed some inspiration from Pierre Charles L'Enfant's plan for Washington, D.C. But the plan was abandoned by 1818, and the city has scant few blocks downtown showing off Woodward's unusual street design. The city was largely laid out without any plan at all. In fact, Maybury's quip inspired one Detroit newspaper columnist to erupt that "graft, indifference, incompetence, and plain idiocy have conspired to make of our street plan an unsolvable puzzle."

More than 100 years ago, it was not uncommon for building designers to work the names of the buildings and their street addresses into the stonework that decorated their entrances. But after all city addresses were renumbered in 1921, the original numbers were obsolete. Sometimes, they were left, as on the exterior of the Renaud apartment building on Second Avenue.

There are countless tunnels beneath Detroit: Sometimes true

Detroit never got a subway like New York and Boston, but there are plenty of good reasons for Detroit to have tunnels even if few rail vehicles rumble under the city (more on them later). First of all, Detroit's "subways" without exception are underground pedestrian passages to keep people crossing during heavy traffic or to allow passage from building to building in foul weather. There used to be an underground passage beneath Second Avenue at Peterboro Street. One remains under West Grand Boulevard between the Fisher Building and the old GM Headquarters. There were large tunnels underneath large institutions, such as tunnels for transporting patients under Wayne County's Eloise Hospital, or service tunnels beneath Northland Mall. There were tunnels at Ford's Highland Park factory. Ford seemed to especially love tunnels, and had them installed at his plants and at his beloved Greenfield Village in Dearborn. Of course, in the 1930s, at the time of the Lindbergh baby kidnapping, some may have been designed for personal safety. Some are alleged to have been built by bootleggers, such as the rumored tunnel connecting Busy Bee Hardware with its warehouse across Gratiot Avenue. But there is at least one proven tunnel connecting the basement of downtown Detroit's Tommy's Bar with a nearby church, said to be a relic of the days of the Underground Railroad. That "underground railroad" of course, was metaphorical, but dozens of trains a day still do rumble underground, on their way to and from Canada, via a pair of portals due south of Vermont and Porter, visible from the Bagley Street bridge behind Michigan Central Station.

If on some unlucky summer day you were to fall into the Detroit river, chances are you'd be able to swim to the shore — provided you had a minimum of swimming skills. What proves deadly is when people fall in and attempt to swim back where they were. Only the most talented swimmers can slice through the stately but steady current of a few knots. Another danger is all the junk that's at the bottom of the river: dumped waste, old cars, even rumors of accumulations of waste once called "Chickenbone Reef." The sections of the old 1889 bridge to Belle Isle that weren't destroyed when the bridge burned in 1915 remain a hazard. And there's also one more thing people may not realize: A smaller version of Belle Isle buried just slightly underwater, sitting between the mainland and Belle Isle Park. On navigational charts, it's called Scott Middle Ground, and you can make it out hazily on Google satellite view.

There are 40 square miles of vacant land in Detroit: False

Every so often, somebody repeats the myth that a third of Detroit is vacant. That would mean Detroit had 46 square miles of vacant land. Yes, that's true — if you include cemeteries. And public parks, like Belle Isle and Rouge Park. And every other city park. You see, our friends over at Michigan Radio looked into the issue more than three years ago, and published actual research debunking this figure. The actual figure, as estimated by the numbers-crunchers over at Data Driven Detroit, is 21.39 square miles.

Detroit had more theater seats than any other city except New York: Not so fast!

Other cities have made this claim, including Cleveland, Houston, and Minneapolis. But Detroit's "theater district" arguably goes from downtown to New Center, and does include more than a dozen theaters seating 500 to 5,000, for a total of about 25,000 seats. How does that stack up with Cleveland's more tightly focused theater district? Those are good questions. Perhaps Detroit would do better to tout its downtown sports seating instead?

There's a salt mine beneath Detroit: Technically true

Really only a part of it is beneath Detroit. The mine sprawls under Melvindale and Allen Park too, but it's so far down as to be another world entirely. It's 1,200 feet down – roughly an Empire State Building, give or take a few stories – and covers about 1,500 acres down there, connected by five miles of tunnels.