Detroit ink: New books on the city, its people, and relevant spaces

We all know Detroit is a city of myriad, complex flavors, hosting both bitter and sweet. We also know that a good story — even if it’s been retold a hundred times — gets better with each telling. With the right storyteller at the helm, the part you thought you knew by heart remarkably takes on different meanings, with shinier cadences, and new players cast in familiar roles. In short: the story takes on new life.

As we say farewell to 2021 and look ahead to the New Year, it’s a great time to build your reading list. If your New Year’s resolution is to read more books, think of these selections as an entertaining staycation, transporting you to Detroit and back again. Like the joy of hearing a well-timed punchline, there’s something magical about revisiting a familiar place and seeing something transformational, tucked within the landscape.

These five books — either Detroit-based or written by Detroit-based authors — help us to understand more about the Motor City and, in the process, invite deep thought, celebration, and a renewed engagement.

Soupy Sales and the Detroit Experience: Manufacturing a Television Personality

Nothing says Detroit like Soupy Sales (born Milton Supman). You might not have been around during his heyday (the 1950s-1960s), but his comedic work left an indelible imprint on Detroit. What’s revelatory for the uninitiated is not merely Soupy Sales’ WXYZ-TV shows, Lunch with Soupy Sales (a kids show) and Soupy’s On (an evening show for adults), but his deep connection to the Detroit jazz scene. Jazz trumpeter Clifford Brown, an influential bebop legend, had his last performance (before his fatal car crash in 1956) on Soupy Sales’ show. The author’s overview of popular television in Chapter 5 is a wonderful primer for armchair cultural scholars interested in the wider cultural influence of Soupy Sales and the world he inhabited.

The Velvet Bazaar: Sonnets of Sex and Love in Detroit

If you know your Shakespeare or have a cursory relationship with the Bard, you might have heard of a sonnet. In brief, a sonnet, according to the Poetry Foundation, is a “14-line poem with a variable rhyme scheme originating in Italy and brought to England by Sir Thomas Wyatt and Henry Howard, earl of Surrey in the 16th century.” Shakespeare published about 154 sonnets, many of them dealt with love and longing. Native Detroiter Marsalis takes his cue from the master, and uses the basic form as a springboard for similar ruminations. These evocative encounters into bedrooms, street corners, roundabouts, cul-de-sacs, and candlelit corners of the mind, with such titles as “City Without Pity (The Cyborg),” “Ghost/Ghosting,” and “Whenever You Text Me,” pushes us comfortably along a satisfying melancholia. You’ll want to read them twice to get the full effect.

This collection of poetry is meant to get under your skin. Divided in five parts, “Hamburger Surprise,” “Street View,” “Gun/Shy,” “Leaving the Piano Behind,” and “The Grand Design,” each poem builds to a larger conversation on the precarity of life, and how the mundane can be full of dramatic possibilities. In “My Father Worked 800 Hours of Overtime,” Daniels writes: “on the line at Ford’s the year I turned 16/ and had sex with a substitute teacher/ and began drinking in earnest/ and selling nickel bags/ out of the basement bean bag chair.” His poems are steeped in Detroit geography, where street signs and the smell of food evoke the strange. Be sure to check out “Shouting a Sonnet into Detroit’s Dead Microphone” for a sonically (and visually) disruptive experience. 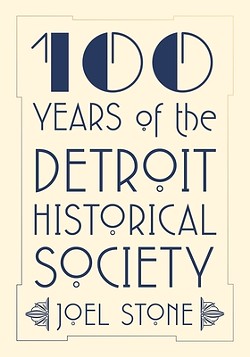 100 Years of the Detroit Historical Society

Every home library needs a library-worthy item — 100 Years of the Detroit Historical Society is the type of book you should leave on the coffee table as a conversation starter. There are plenty of historical books about Detroit, but this one focuses on the Detroit Historical Society as a “champion standing apart from the maelstrom to capture, preserve, and tell the city’s story in all its many facets.” You won’t curl up in bed to read this one, but it does provide a hundred years’ glance back. Fans of the “Streets of Old Detroit” attraction will find an origin story (1951) and a detailed account of its restoration.

That They Lived: African Americans Who Changed the World

By Rochelle Riley and Cristi Smith-Jones

In this case, it would be safe to judge a book by its cover. That They Lived: African Americans Who Changed the World is kid-friendly, educational, and yes, playful. This is a book for the whole family, and each entry is short enough to read before bedtime if you’re searching for a nonfiction alternative to the traditional bedtime story. There are, of course, the usual suspects, Martin Luther King Jr., Booker T. Washington, Ida B. Wells, but also some surprises, including Stevie Wonder and Aretha Franklin. This is a great mix of various lives, professions, and influences upon our American consciousness. Here, you have accessible biographies of 20 trailblazers that if read daily, can be completed in less than a month. And yes, the photographs of kids miming black historical figures throughout the book is both adorable and beautifully inspiring.