Detroit is being invaded by arctic snowy owls

Who are they, and what do they want? 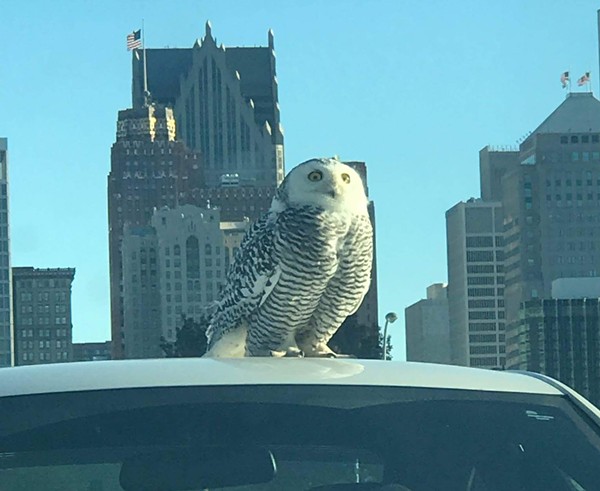 If you're lucky, you may have spotted a relatively unusual sight in Detroit lately: the striking black and white snowy owl, visiting from the arctic tundra in northern Canada. One has taken up a regular roost on the rooftop of One Woodward Avenue, much to the delight of Quicken Loans employees. One woman even found one perched on top of her car parked outside the post office, and others have been spotted hunting throughout the city and suburbs.

Bailey Lininger, a program coordinator at Detroit Audubon, says the birds are just visiting — they're here due to an irregular migration event known as an irruption, caused by a population boom in their arctic home. They'll hang out for the winter and eat, and will fly back up north to breed in the spring.

"There's less snow here than there is in the tundra right now, so it's easier for them to find food," she says. "And there's less competition because the more mature birds are up on the tundra."

Typically, Lininger says, migratory birds are very precise in their habits — flying to and from the same places at the same times every year. But snowy owls have a much more complex migration pattern: some stay put in the tundra during the winter, while others fly south — even as far south as Florida or Bermuda.

"They are far-flying birds," Lininger says. "They like to travel."

Lininger says irruptions are great for biologists because it allows them a chance to study birds they otherwise wouldn't have access to. And there are a lot of misconceptions about the birds.

"It's definitely an area where a lot of us are trying to learn, and there's not enough people in northern Canada studying these birds for us to have a really good idea," she says. For a long time, there was a belief among biologists that the snowy owls that were coming this far south must be ill or confused. But Lininger says we now know that the opposite is true: The southern-migrating snowy owls actually tend to be very healthy.

"There's just too many of them, because there were so many babies born in the breeding season," Lininger says. She notes that the snowy owls that make up the irruption tend to be juveniles. "They come down here because there's a solid place for them. And the older, breeding snowies stay up north because they're the ones who can defend their territory. They're more established," she says.

Lininger says a Detroit-area snowy owl migration is rare but not unprecedented — there was also a wave in the winter of 2013 to 2014. She urges that people respect our visitors from the north. "We want to be welcoming hosts for the snowy owls when they're in our city," Lininger says. "They're not used to seeing or being around humans, so don't harass them or freak them out." (Plus, Lininger notes, snowy owls are protected under the U.S. Migratory Bird Treaty Act, so it's illegal to hunt or capture them, or tamper with their nests.)

Lininger also points out that since the birds don't have natural predators, humans are their biggest threat. Since the birds are not used to humans, they can tend to be kind of fearless (like that snowy owl brazenly perched on top of the car). And unlike most owls, snowy owls are diurnal, not nocturnal— meaning they are active during the day.

"They're coming from the tundra. They haven't seen roads and cars and all of that," Lininger says. "They don't understand what a city is, so that can be a threat to them. They're not going to act the same way that birds that you're used to seeing in cities are going to act."

But those are the same qualities that make snowy owls so good for bird watching. Lininger says the best way to find birds is to think like one. "They're used to being in wide open spaces, because that's where their prey is," she says. "They're used to eating stuff that scurries around in fields."

Lininger says because of that, one of the best places to see them is at airports. She says you'll often spot one on top of a telephone pole, or the only tall thing in an area. Bird-watchers have also reported lots of sightings at the Pointe Mouillee State Game Area just south of Grosse Ile, where the Detroit river connects with Lake Erie.

Lininger recommends for people interested in learning more about snowy owls to connect with Detroit Audubon, which hosts a variety of field trips and bird watching events throughout the season and beyond. "Our goal is to show how humans and birds, we're all connected," she says. "We all depend on healthy environments and a healthy natural world."

Bird watching, she says, is a good way to appreciate that connection.

"We like to think of birds as this incredible entryway into the natural world, because they're all around us," she says. "They live in cities, they live in the suburbs. You can see a snowy owl on top of a car at a post office in Detroit, and you can see that we're sharing the environment with these incredible creatures."