Detroit is razing houses with money intended to save them 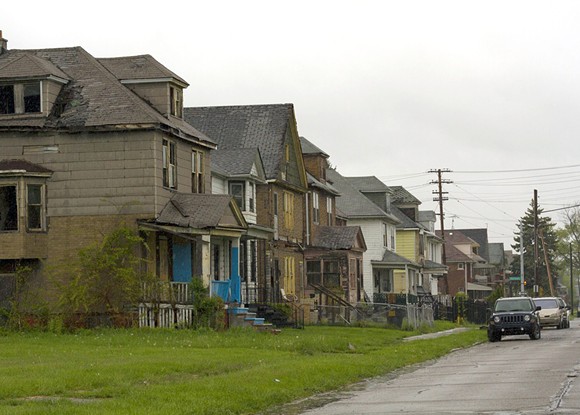 Detroit's decade-long wave of tax and mortgage foreclosures has wiped out large swaths of the city's neighborhoods as Wayne County continues to seize thousands of occupied homes a year.

And while the city's neediest homeowners were supposed to receive federal assistance to save their homes as part of the Treasury Department's seven-year-old Hardest Hit Fund, Michigan squandered its originally allotted $498 million by creating unnecessarily stringent requirements — according to a scathing audit issued in January by the Office of the Special Inspector General for the Troubled Asset Relief Program (SIGTARP).

As a result, more than 80 percent of Detroiters making $30,000 or less a year were denied assistance to save their homes from tax or mortgage foreclosure. By contrast, the other 17 states with Hardest Hit Funds rejected 53 percent of homeowners making less than $30,000.

"Michigan and Ohio are among the states that have the most TARP dollars set aside, but also have some of the highest percentage of people turned down for the Hardest Hit Fund," the audit reads.

SIGTARP said Michigan's high rejection rate "raises questions about whether these programs are as effective and efficient as they can be to reach those people who are the hardest hit."

With a surplus of unused money, Michigan became the first state in 2013 to demolish homes using money intended to save them. The idea was that demolitions would revitalize neighborhoods by increasing the property values of surrounding houses, attracting new homeowners, and reducing crime rates.

A report commissioned by the Skillman Foundation and Rock Ventures found that each demolition in Detroit increased the value of adjacent homes by 4.2 percent. Since 2013, Detroit has razed more than 10,000 blighted and abandoned houses using the federal funds.

But the Treasury Department's decision to allow Michigan and several other states to use the money for demolitions has come under fire because the federal government created no rules or controls to prevent fraud, waste, and abuse, according to a 2016 SIGTARP investigation.

The investigation found that demolition programs are "vulnerable to the risk of unfair competitive practices such as bid rigging, contract steering, and other closed door contracting processes" because the "Treasury conducts no oversight" and therefore cannot determine whether the cost of demolition is "necessary and reasonable."

The SIGTARP report added that "the vulnerability of the Hardest Hit Fund to fraud, waste, and abuse significantly increased with blight elimination, which Treasury could have mitigated, but did not."

In a report to Congress in April, a federal inspector slammed the state of Michigan for "skyrocketing demolition costs," indicating that the average price to raze a house had increased 90 percent, from $9,266 to $17,643 by the second quarter of 2016.

The Detroit Land Bank's handling of the demolitions has become the subject of an ongoing federal grand jury investigation. The Land Bank declined to comment for this story.

Foreclosure experts question why Michigan, one of the states hardest hit by the Great Recession, would prioritize demolition over foreclosure prevention.

Over the past decade, more than one in three homes in Detroit — a total of about 140,000 — have been foreclosed because of unpaid taxes or mortgage defaults.

"Many of the houses now being demolished could have been saved if there wasn't a lack of preventing foreclosures," says Jerry Paffendorf, co-founder and CEO of Loveland Technologies, a Detroit-based property and mapping company. "If you don't prevent foreclosures, you're going to have more houses to demolish."

In 2010, Michigan originally received nearly $500 million to provide loans to eligible homeowners who were facing tax or mortgage foreclosure. But the program, called Step Forward Michigan, rejected funding for about 5,000 Detroiters, while assisting more than 2,000 homeowners who earned at least $70,000 a year.

SIGTARP found that Michigan's eligibility requirements were more stringent than most states. Michigan, for example, declines assistance to homeowners whose income was not cut by at least 20 percent, while other states don't require a specific pay reduction to be eligible. Michigan also denies funding to homeowners whose unemployment benefits ran out more than a year ago.

Of the $761 million that Michigan received in Hardest Hit Funds since 2010, half was committed to demolitions.

"The Michigan requirement does not reward a responsible worker whose paycheck was cut more than one year ago and has exhausted unemployment benefits, savings, family help, or low-paying part-time work to pay their mortgage," SIGTARP wrote in January 2017.

Michigan's focus on demolitions left the state without money to help new applicants for foreclosure assistance for the first four months of 2016.

Sen. Coleman Young II, who is running for mayor of Detroit, rolled out his plan to save the city's neighborhoods last week and said he would lobby state and federal officials to use the demolition funds for their intended purpose — helping homeowners avoid foreclosure. The key, he said, is getting the state to make more people eligible for the funds.

"I want to use the Hardest Hit Funds to help people stay in their houses," Young said. "Imagine how many people would still be in their homes if the state didn't reject more than 80 percent of the people making $30,000 or less."

About 4,000 occupied houses are facing property tax foreclosure this year.