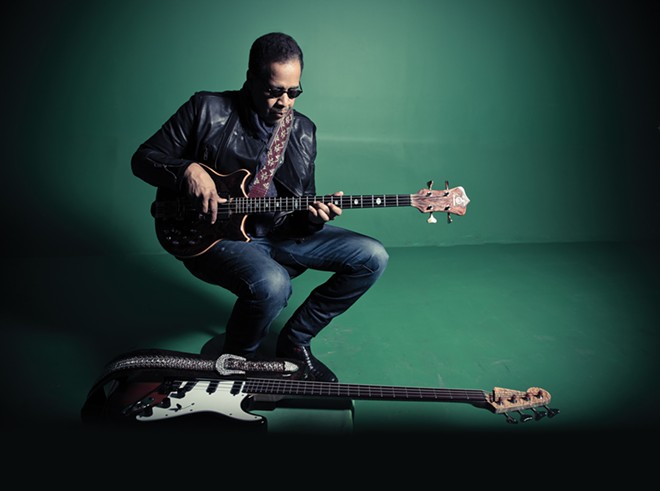 Whether you know it or not, you've heard Stanley Clarke's music. Jazz fans are intimately familiar with the man; he's one of the most revered electric and acoustic bassists in the genre, present at the dawn of jazz fusion and one of the relatively few players to have crossed over into mainstream success.

But in addition to a storied jazz career — a shortlist of people he has worked with includes Joe Henderson, Pharoah Sanders, Art Blakey, Stan Getz, Horace Silver, and perhaps his most well-known partner in crime, Chick Corea and their '70s fusion group, Return to Forever — he's also teamed up with prominent rock musicians. He performed with Ronnie Wood and Keith Richards of the Rolling Stones as the New Barbarians, played bass on a Paul McCartney album, and started yet another band (Animal Logic) with the Police's Stewart Copeland.

His latest formation is the Stanley Clarke Band, a rotating group with several albums under its belt, the most recent being last year's spacey The Message. Yet even if, somehow, none of that rings a bell, his film and television scores certainly will: his first-ever was for Pee-Wee's Playhouse (which earned him an Emmy Award nomination), and others include Boyz n the Hood, Romeo Must Die, and even Tales From the Crypt.

Does Stanley Clarke ever sleep? Given that he's in the 53rd year of his career and still tours constantly, putting on 70-90 concerts a year, one might be inclined to think that he does not, in fact, sleep. But the thing is, he loves it. "You grow up and you do what you do," he says, speaking on the phone from his home in Topanga, California, on a beautiful day.

Macy Gray brings her R&B, jazz-inflected pop to Detroit Jazz Fest
By Ana Gavrilovska
Festival Guide
"If someone asked me, is there another way of getting your music out there, would you do that? Possibly, but I don't really know of any other way to get it directly to people," he adds. "You can make music and post it online, but you really have no way of knowing who it's reaching and whether they really like it or not. That's the beautiful thing about playing music live: you play and get a reaction immediately."

He's sure to get quite a reaction at this year's Detroit Jazz Fest; as artist-in-residence, he is playing three times, with an entirely different focus for each set. When it comes to selecting the artist-in-residence, festival president and artistic director Chris Collins always looks for "great artistic voices that have a diversity and evolution in their music." That's Clarke in a nutshell, and it's perfectly reflected in the three performances he's prepared for the festival's 40th year.

On Friday night, he takes to the main stage for "Back-to-'School Days,'" a titular reference to his classic 1976 solo album: "We're gonna look at a lot of music from my past, more of the funkier, jazz-rock side," he says. "It'll be a rambunctious, bombastic night." For that, he'll be joined by Return to Forever bandmate Lenny White on drums. Sunday evening, he takes it even further back with "A Night of Jazz with the Stanley Clarke Band," paying tribute to his acoustic jazz roots. "Prior to the mid-'70s, I had a very rich straight-ahead jazz career," he says. "I played with many of the forefathers of jazz. That is heavily embedded in my foundation no matter what I do; it has always been there as a support for me. I'm gonna honor those musicians and that music on the second night."

The third performance, closing out the festival on Monday night, is perhaps the epitome of the festival's goal to act as a conduit for totally new material that one is unable to experience elsewhere. Clarke will be tapping into the film score side of his talent by performing with the 25-piece Detroit Jazz Festival String Orchestra alongside footage from the classic John Singleton film Boyz n the Hood. "I'm gonna talk about that movie and how it impacted America," he adds. "That's gonna be a real nice way of rounding out my residency there. We're gonna do something which is difficult to do, but we're putting it together. It's a technical feat, kind of like going to a drive-in movie, but everything is live."

Clarke has certainly come a long way from the gangly 12-year-old who switched to the bass after trying violin because it was simply too small for his hands. Back then, he was training to be a classical bass player, with a dream to someday join the Philadelphia Orchestra. At some point, he got hooked into jazz, and later on, when he met pianist, keyboardist, and composer Chick Corea (last year's artist-in-residence), his future took on a bit of a different path. While Clarke had already cut his teeth with straight-ahead jazz, with Corea he began to explore a new form of the music.

He met Corea during a gig with saxophonist Joe Henderson, in Clarke's hometown of Philadelphia. "We're gonna bring this guy down from New York," Henderson said to him. Clarke didn't know much about Corea, other than the fact that he had a record out. "When Chick came out, he was one of the nicest guys you could ever meet. When we got on the stage together, we had a connection that was just instant. We took over the stage and it was pretty fun."

This particular gig was a three-day engagement, and during one of those nights, Clarke invited Corea to hang out at his tiny little apartment. "We were listening to this John Coltrane record," he says. "I remember everything. The song was called 'Wise One' and Chick said, 'That's my favorite Coltrane song' and I said, 'That's mine too!'"

One thing led to another, and they started talking about starting a band. "When you put bands together, it could be the most basic thing, like 'Wouldn't you like to be in a band where we could wear red shirts?'" Clarke says with a laugh. "It's usually never about the music."

"So we were talking about this, and we're like, 'Wouldn't it be great if we could play jazz music and not have our eyes closed?" he says. "[With your eyes closed], how are you supposed to know when to stop? Maybe things will be better if you could look at each other and signal and you could see whether someone's getting happy or more excited.' So that's where it started with us. It was about communication."

While the eyes open vs. closed debate is admittedly a little silly, what it points to — the importance of strong communication between band members — is decidedly not, and so obviously true for these two men. Fast forward about eight months from the initial conversations, and they reconnected. The result would be Return to Forever, one of Clarke's most well-known and well-received bands, leaving in its wake one Grammy win, eight studio albums, and an indelible imprint on the electrification of jazz music.

"When you look back at something you do in art, you can always marvel or gloat at the fact that you were the first to do it," he says. "But at the time, when you're doing it, especially if you're young and broke, trying to make a dollar to buy a sandwich somewhere, you're not gloating at anything."

Detroit musicians and fans share their must-see Jazz Fest acts
By Ana Gavrilovska
Festival Guide
"While you don't necessarily think you're the first at it, at some point you do realize that what you're doing is important," he says. "Usually, someone writes about it and says, 'Wow, this is really something.' There was our band, Return to Forever; there was Weather Report; there was the Mahavishnu Orchestra; there was Miles Davis' band. Miles was the grandfather, he was the big ocean liner that we were all on top of, floating through time with this music. And writers had these phrases. First it was jazz-rock because we were improvising and using jazz language, but rock because we were as loud as rock bands, we had discovered amplifiers. We would just turn up. Then later they called it fusion, then jazz fusion. But we weren't really thinking of it as jazz-rock. We didn't have any of those titles. We were just playing. We were just surviving."

It's little wonder that Clarke is as open-minded now as he's ever been. "The term 'jazz' means so many different things," he says. "You have smooth jazz, you have straight-ahead jazz, you have music with jazz elements and sensitivities. So, for me, jazz is really more of an attitude than anything." But the breadth is also what he loves about Jazz Fest: "The Detroit Jazz Festival has been around for a long time and it's one of the better festivals in the United States because it really covers the full range of jazz music."

Clarke's own career reflects this full range, and it's part of the reason he was chosen to be the face of this year's festival. "The variation of what he brings to the table has always excited me about Stanley Clarke," Collins says. "Even when he's playing in a fusion setting, the jazz vocabulary is there. His understanding, love, and internalization of that history and legacy is there, and it's being built upon to create something beautiful and new."

This deep curiosity and forward momentum, a willingness to embrace the future without losing sight of the foundation, shaped Clarke from the beginning and continues to shape him now. After a few minutes spent discussing why he is still inspired to make music, his summation puts not just his own creative endeavors, but also humanity's, into perspective: "I guess what I'm trying to say is that art is probably the most natural thing that a spirit, that a person, can do."