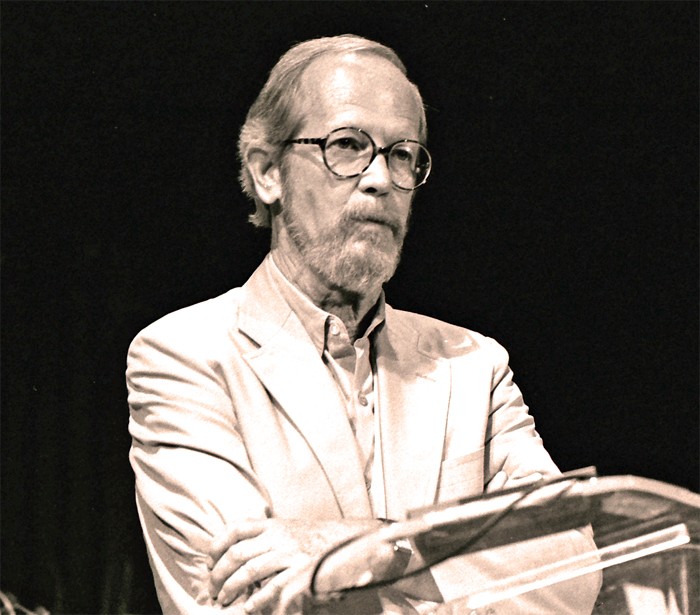 When it comes to Elmore Leonard and Hollywood, the 1980s were not kind to the late, great Detroit-area novelist. Perhaps his small-gauge (but always lethal) approach to suspense was a poor match for the more-is-more excess of a decade dominated by Sylvester Stallone and Arnold Schwarzenegger action flicks. Or maybe the appeal of his wickedly understated wit and eccentric workaday criminals wasn’t broad enough for audiences who giddily embraced yuk-fests like Ghostbusters, Crocodile Dundee and Three Men and a Baby. Whatever the reason, the prodigious author, who spent the better part of 60 years cranking out hilarious, intricately plotted crime stories and sweaty, evocative westerns, saw novels like Cat Chaser, Stick and 52 Pick-Up flounder on the screen and at the box office. It seems the rah-rah Reagan era was a poor match for an author who traded in sparkling verbal banter, offbeat characters and unexpected violence.

Coming off the success of 1982’s Tootsie, Dustin Hoffman was in a position to reverse that trend by teaming first with Martin Scorsese and then Hal Ashby for a 1986 cinematic adaptation of Leonard’s thriller La Brava. But costs and egos got out of control, and the project was shelved.

It wasn’t until the 1990s that the celebrated crime novelist finally got his silver screen due, hitting the trifecta with directors Barry Sonnenfeld, Steven Soderbergh and Quentin Tarantino, directors who not only understood what was special about his work, but how to translate it to the screen.

“The best ones know not to try to be funny, that Leonard’s stories and characters are innately funny,” says writer-director Daniel Schechter. “The films that fuck it up get the tone wrong or push it too hard because there’s a lot of opportunities to indulge in eccentricity.”

Schecter premiered Life of Crime at this year’s Toronto International Film Festival, the latest Leonard novel to make it to screen. Unfortunately, Dutch, as his friends called him, passed away in August, before he could see if the trust he gave the young indie filmmaker properly honored his source material. Adapted from his 1978 novel The Switch, the movie stars John Hawkes and Mos Def as Ordell Robbie and Louis Gara, Leonard’s interracial criminal take on Laurel and Hardy. You might remember their characters played by Samuel Jackson and Robert De Niro in Quentin Tarantino’s Jackie Brown.

“John and Mos were determined not to watch Jackie Brown because they didn’t want to be influenced by what those actors did,” Schechter says. “They wanted to make their own impression based on our conversations, on the script and, of course, the book, which I encouraged everyone in the cast to read.”

The movie (like the novel), is a comedy-of-errors crime caper, with Ordell and Lewis kidnapping Mickey (Jennifer Aniston), the trophy wife of Frank Dawson (Tim Robbins), an unscrupulous Detroit real estate developer. Unfortunately, the duo is unaware that Frank can’t stand his wife and was ready to run off with his conniving mistress, Melanie (Isla Fisher).

Set in the novel’s 1970s, Schecter’s small-budget indie takes an intimate, underplayed approach to Leonard’s work, delivering a faithful and good-natured, if somewhat predictable, low-rent crime flick. And, as usual, the author’s dialogue (taken directly from the novel) sparkles.

“I wanted to give people the experience I have when reading Elmore Leonard’s work,” Schechter explains.

All too aware of how many films have gotten Leonard’s work wrong, Schechter says he picked The Switch because it lent itself to a cinematic treatment. “Not every good book makes a good film. That’s the problem I see with some of the big failures. They didn’t necessarily suffer from poor filmmaking, it’s just they picked the wrong book. It either had too much dialogue or too much exposition or fizzled out because of a lack of cinematic set pieces. Other times the chemistry of the cast was just wrong.”

So, what films tackle Lenoard’s punchy lines and knotty plotting best? Here’s a rundown, from best to worst, of the books that made the leap to screen. As for what’s left in the Leonard canon that lends itself to the multiplex, Schechter suggests Tishomingo Blues. “It [was] Leonard’s favorite book he’s written and it’s certainly one of my faves. It’s also very cinematic, with these great Civil War re-enactments. It’s a Dixie mafia mini crime epic that I think would be really cool and exciting.”

Arguably the best and certainly the most cinematic Leonard adaptation, Steven Soderbergh’s snazzy neo-noir is thrilling, funny and actually managed to get a good performance out of Jennifer Lopez. George Clooney calls it his best film. (A)

The other “best” is Quentin Tarantino’s crackling adaptation of Leonard’s Rum Punch and homage to blaxploitation films. More amazingly, he delivers the most subversive film of his career, focusing on an interracial middle-aged romance between Pam Grier and Robert Forster. Schecter says: “I think it is the best adaptation of Elmore’s voice and work, even though Tarantino put so much of himself in it. The movie has so much back-to-back dialogue, but Tarantino is so good his dialogue plays like an action sequence.” (A)

This candy-colored crime confection cemented John Travolta’s comeback (which he then turned around and threw away with Battlefield Earth) as the cooler-than-cool Chili Palmer, a gangster who loves movies. The movie also proved that Barry Sonnenfeld (Men in Black 1-3, Wild Wild West) took some of what he learned as the Coen brothers’ director of photography and applied it to scripter Scott Frank’s savvy mix of humor and violence. (A-)

Paul Newman teamed with Hud director Martin Ritt to bring the author’s muscular, revisionist Western to the screen. Directed with panache and boasting complicated characters wrestling with social hypocrisy, this is, to date, the best and best known of Leonard’s Westerns. (A-)

Both have their virtues but I give the edge to the earlier version, which stars Van Heflin, Glenn Ford (in a rare turn as the villain) and Henry Jones. Taken from a 1953 short story, it’s a suspenseful tale of corruption and greed. The remake is leaner and flashier than its predecessor, with Russell Crowe channeling Hannibal Lecter as the ruthless and charismatic Ben Wade. (B+)

This one’s an oddity for sure, starring Christopher Walken as an evangelist who attempts to exploit the seemingly miraculous healing abilities of a guileless young man (Skeet Ulrich — remember him?). Taken from Leonard’s 1970 novel, the movie is both whimsical and sincere, with a truly oddball cast that includes Bridget Fonda and Tom Arnold. What makes it kinda sorta work is Paul Schrader’s well-calibrated direction. (B)

A competent if not particularly notable Western that brings together two giants of the genre — Clint Eastwood and Magnificent Seven director John Sturges — with an original script by Leonard. Oddly, the author doesn’t take to screenplay writing as assuredly as he takes to novels, and the result is a movie that feels like it should be better than it is. (B-)

Charles Bronson makes a sturdy, studly protagonist, as an ex-Army ranger turned watermelon farmer who has to fight off a vengeful mobster. The action is good, the performances solid but the dialogue is laughable — which seems unconscionable given the source. (B-)

Cheap but it has its sleazy charms. Roy Scheider squares off against blackmailers John Glover and Clarence Williams III as bodies pile up. John Frankenheimer directs the tension with a sure hand and Leonard got the script credit. Unfortunately, the whole thing crumbles in the end, degenerating into a generic action flick. (C+)

Burt Reynolds on the down slope of his career stars and directs this lumbering actioner that jettisoned Leonard’s wit and verve. Instead it’s got stupid action set pieces and a hammy, scenery-chewing performance by Charles Durning. (C-)

Peter Weller (fresh off Robocop) seems like a good choice for Leonard’s haunted army vet, who returns to the Domincan Republic to find the teen sniper who once saved his life. Instead he finds his ex married to a psychopathic general. Things get complicated from there. Abel Ferrera brings some atmosphere to the sweaty, tropical noir but the movie’s a mess, indifferently constructed and recut by the studio. (C-)

Twice at bat, both strike out. Leonard reportedly hated the 1969 version starring boring old Ryan O’Neal. I can’t imagine he thought much more of George Armitage’s Hawaii-set version. Pitched as a comedy and tragically miscast with Owen Wilson in the lead, the movie can’t decide if it’s crime flick or broad comedy. The funny thing is, Armitage seems like he should have been a good directorial choice, having helmed both Miami Blues and Grosse Pointe Blank, movies that share some of Leonard’s sensibilities. Strangely enough, if you put elements of the two films together they might have amounted to a decent adaptation. (C-)

All are pretty terrible, ruining one of Leonard’s best-loved novels (Killshot) or making worse Leonard’s least successful effort (Be Cool). Each is boring, miscast and laugh-free, demonstrating that the filmmakers involved were tone-deaf to the music and rhythm of the author’s inimitable style. (F, D+, D).