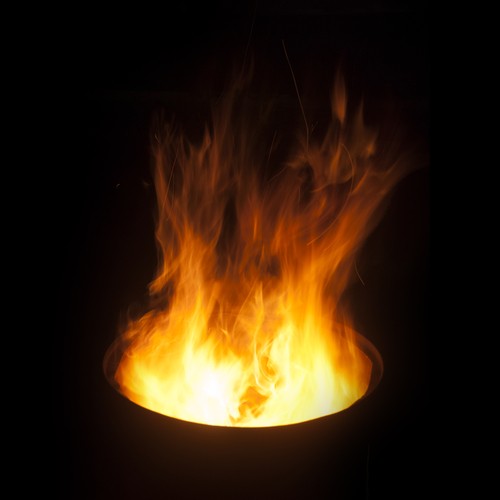 With all these frigid temperatures and heavy snow caused by the polar vortex, I was wondering how my friend Mulenga Harangua was making it in his squatter house. Actually he’s been in there a couple of years, and I guess I should just consider it his house — until somebody shows up with a bulldozer to tear it down.

He had cleared the snow from the walk and steps so I had no problem getting to the door. I banged on it a few times but got no answer. As I was getting back in my car, I saw smoke drifting around the side of the house and went back to see what was up. I found Mulenga wearing overalls and tending a small fire next to a huge mound of snow. It was about 8 feet high and about 15 feet in diameter.

“Welcome to my igloo,” Mulenga said, gesturing toward the mound of snow.

I looked closer and saw that there was more to it than just a pile of snow. It was packed tight and there were lines visible here and there where actual blocks of hard snow had been fitted together. It probably wasn’t going to merit a spread in Better Inuit Homes magazine, but it was impressive.

“Come on in,” Mulenga said, walking around the igloo. There was a low tunnel entryway on the side. I practically had to crawl to get through behind him. There was a slight upward incline near the end.

Inside, it seemed a lot more spacious than I had thought. The floor was made of some pieces of carpet on some boards. There was a cot with some bedding on it, a stump that looked like a chair or a table, and a small camp stove with a propane tank attached to it. The wall was glazed with a thin sheet of ice and a few sticks were poked into it here and there with things hanging from them.

Mulenga sat on the cot and pointed me at the stump. He pulled off the overalls. There were newspapers wrapped around his abdomen and legs, held in place with masking tape. He tore those off and tossed them under the cot. I saw a copy of Metro Times in the pile.

“It’s getting late. I might as well take this stuff off and relax.” Mulenga pulled out a lighter and lit a fire under the kettle. “We can have some tea.”

“Why do you have a fire going outside if you have the stove in here?”

“I’ve got a big chunk of concrete under the fire. I’ll bring it in here later and it will keep this space warm all night. Actually it’s not that hard to keep this warm. The snow insulates it and holds the heat in. Just our body heat can keep it livable in here. The stove can keep it warm too, but I don’t like to burn that at night because of carbon monoxide. But it’s a whole lot easier to heat this space than inside the house. If I had running water, the pipes would freeze.”

The little stove was warming up the space. I unzipped my jacket and pulled it open. “How did you get that ice coating on the inside?”

“When it gets warm in here the snow melts a bit and refreezes. It actually makes the structure stronger.” Mulenga poured the hot water into a pan with a couple of tea bags in it. “I guess I’m living like an Indian. I guess I’m making the L. Brooks Patterson thing about the reservation become reality.”

“You mean when he said, ‘What we’re gonna do is turn Detroit into an Indian reservation’? And the part about building a fence around it and throwing in the blankets and corn.”

“The Kickapoo, Sauk and Fox people who lived here before the Europeans showed up grew corn, beans and squash. They farmed, but they weren’t Inuit. They didn’t live in igloos.”

“Well, this snow was all I had to work with,” Mulenga said. “But I do farm. I grow beans and squash.”

“Fret not, brother.” I took the mug of tea he offered and blew on the steam drifting up from it. “But Patterson forgot to mention one thing.”

“He forgot to say where the opening was going to be where they suck the money out. For instance, I was talking to Betty Kay McGowan; she teaches anthropology at Eastern Michigan University. She said that gaming compact dollars from Indian casinos contributed $61 million to the state last year.”

Mulenga sat up straighter. “That’s a lot of money.”

“That’s just the beginning. There was a study done by the Detroit Economic Growth Corporation back in 2010.
They found that Detroiters spend $200 million each year on groceries outside of the city. I think a big chunk of that goes to Oakland County.”

“Right up Woodward Avenue,” Mulenga said. “I’d guess that the majority of it goes there.”

“And that’s just groceries. The report also says we spend $321 million on clothing outside Detroit, and $162 million at restaurants. All told, we spend about $1.5 billion outside Detroit — furniture, cars, building materials. You name it; we buy it.”

“That’s a lot of corn.” Mulenga sipped his tea. “I guess they do need an opening to get the money out.”

“Then you add on that how they redline and charge so much more for auto and home insurance. All that prosperity in the suburbs is riding on money from the most populated city in the region.”

“Patterson has a lot of nerve talking that kind of trash.”

“He hasn’t gotten over his Coleman Young complex yet. Some people take longer than others.”

“You know what else?” Mulenga said. “He talked that stuff about telling his sons that there was no reason to go to Detroit except for pro sports and that they should never buy gas in the city. But he shouldn’t dog the city the way he does. All the money we spend supporting business out there is ridiculous. If Detroiters spent their money in Detroit, there wouldn’t be a bankruptcy.”

“That’s true.” I looked around the igloo. It was cozy and warm. I wondered what it would be like to spend a night in there. But then stood and zipped up my jacket. It was time to go.

“See that passage?” Mulenga indicated the low opening to the igloo. “That’s how the money gets out.”