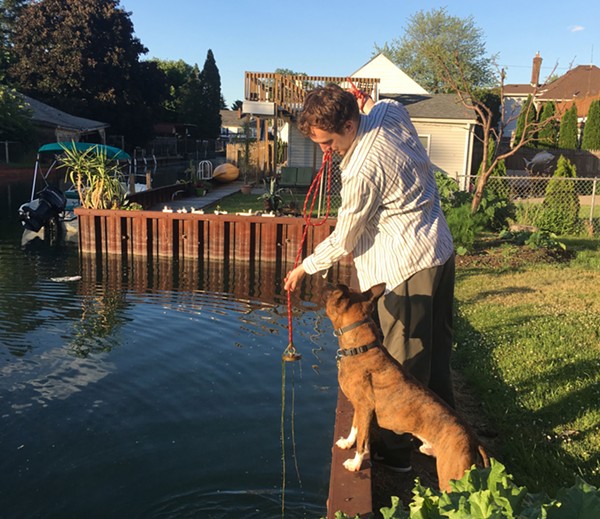 Though he's owned a home on one of Detroit's canals for decades, Arnold Holmes, 80, has never much been into fishing.

"A jerk on one end waiting on a jerk on the other end. That's fishing," he said as we sat in his neighbor's backyard on Harbor Island one recent evening. "I feed the fish."

But when it comes to fishing for things that don't belong under water — that's a different story.

Last summer, on just about any given night, Holmes and his neighbor, Anita Lambert, could be observed standing along their respective seawalls, throwing an object into the water and pulling it back out, over and over, on some occasions for hours. I discovered later that they had come upon a new hobby: magnet fishing, the act of combing the floor of a body of water for metallic treasure weighing up to hundreds of pounds. (I use the word treasure loosely, as most of the items recovered have no real monetary value; the magnet can't pick up transition metals like gold and copper.)

"It's addictive," says Lambert. "I've done it 'til my back hurts," she laughs.

"I got a rifle," Holmes says, pointing across the canal toward a weapon mounted on the back gate of his home.

"That little teal can over there," Lambert says, nodding at a watering can she now uses for her flowers and plants.

A hammer has found a home in the toolbox of Lambert's son. A deteriorated pistol now lies in a coffee table display case in Lambert's living room. The gun, she learned, is an old British Bulldog revolver that may have been manufactured almost a hundred years ago.

"There's a lot of history down there," chimes in a man named Brian, who lives along the same canal.

Of course, a toss of the magnet often turns up nothing. But when it does, Holmes and Lambert say, the wait was worth it.

"All of a sudden your magnet is stuck on something and it's really heavy," says Holmes. "And you're pulling and pulling and then up comes a great big flower pot, and wow!"

"You do get an adrenaline rush when you find something cool," says Lambert.

Holmes and Lambert aren't the only ones who've fallen in love with the activity. There are more than 11,000 subscribers to a magnet fishing subreddit where novel finds are chronicled in daily posts. Standout recoveries include a cash machine and the car hood of a Porsche. The group was created four years ago, suggesting the activity may be new. A Wikipedia stub for magnet fishing was created just last year.

Soon, it's my turn to try. Holmes hands me a magnet attached to a long rope with a loop at the end. I put my right hand in the loop so as not to lose the magnet and throw the rope out into the canal with my left. Plunk it goes into the water, down about 15 feet to the bottom. Then I slowly pull the rope back toward me and lift it up and out.

"Stay away from the wall though!" Holmes reminds when I get too close to the metal edge dividing the yard and the water. "Now you would have been on the wall for a half hour."

The magnet is so strong, he explains, that he has to use a car jack to crank it off the wall each time it gets stuck.

A few fruitless throws and I'm already bored, but feel impolite about immediately abandoning the activity.

"We fished this so much already," Holmes says.

On my fourth toss, I manage to pick up a sludge-covered nail.

The underwhelming find is evidence of what has become a largely futile pursuit, at least on this portion of Harbor Island. Holmes and Lambert spent so much time mining their corner of the canal last summer, they got all the good stuff. This year, they haven't spent much time fishing, but are considering venturing out in their kayaks to search other canals, or plunking the magnet in the Detroit River from a nearby park.

"It's relaxing isn't it?" says Lambert.

"Yeah relaxing," says Holmes. "Relax and go out and see what you're going to get. A jerk on one end waiting on a pull on the other end. That's about it."

ICYMI: 4 die at Faster Horses festival, the cost to weather-proof Michigan’s infrastructure, and other stories you may have missed

The good, the bad, and the ugly of the $3.5 trillion reconciliation package
Top Stories