Detroit may be financially bankrupt but culturally it’s thriving 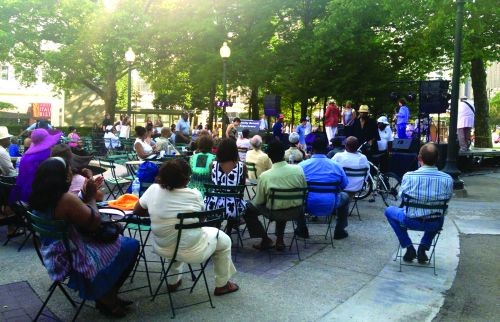 I was speaking with a Los Angeles-based journalist about Detroit music history recently when the city’s proposed bankruptcy came up. I was able to quip that, based on our musical culture, we may be financially bankrupt but we’re certainly not culturally bankrupt.

The evidence from this past week shows that those cultural riches spread far beyond just music. The jewels of creativity are evident — if you will just look.

On Saturday, I attended a poetry reading in Paradise Valley Park. Outside on the warmest fall day we’ve had so far, I listened to some of the city’s most accomplished poets read the poetry of Robert Hayden and Dudley Randall, as part of a centennial celebration of those poets’ births.

Hayden was born in Detroit in 1913, and raised in the Paradise Valley business and entertainment district of black Detroit. Among many accomplishments, he was Consultant in Poetry to the Library of Congress from 1976 to 1978, and was one of 10 American poets pictured on postage stamps in 2012. Randall was born in January 1914 in Washington, D.C., and moved to Detroit with his family in 1920. Randall established the pioneering Broadside Press to publish African-American poets in 1965, and was poet laureate of Detroit from 1981 until his death in 2000.

This centennial celebration started a week earlier with a discussion of their poetry at Wayne State University and continues through April with events at WSU, Marygrove College, the University of Michigan and the Wright Museum of African American History. You can find a calendar of events here.

At a time when we are reinventing Detroit, as we look forward to a renaissance in a new century, that rebirth can’t happen without including the aid and counsel of those who came before us. We must look back and embrace the best of what came before. Hayden and Randall are part of that literary best that should not only be revered, but the ideas as expressed in their writings should be known and embraced to enrich our journey forward.

Another aspect of embracing our cultural heroes was evident that day. The short stretch of street leading from the park (formerly Harmonie Park) to Gratiot Avenue is named Harold McKinney Way, after the jazz pianist and former elder of the great McKinney family of musicians.

Before I arrived at the reading, I was at the Arts Extended Gallery where a former Detroiter and current New York-based artist, Michael Kelly Williams, gave a program on his former mentor, printmaker Robert Blackburn.

Williams is an old friend, and I welcomed the opportunity to visit with him. It was also great to see that an old homeboy who has made good was remembered and brought back to help inspire another generation. In addition to an extensive body of work that includes printmaking, painting and sculpture, Williams has created album covers for internationally acclaimed pianist Geri Allen, a Detroiter herself. He also created the “rough and ancient implements” used in the Gullah town of the critically acclaimed film Daughters of the Dust.

Seeing that the gallery was in a house on a residential street on the west side — not far from where the old Bluebird Inn jazz club used to be on Tireman Avenue — was as exciting to me as the program there. Arts Extended was formerly located in Midtown. Cledie Taylor, the 87-year-old gallery director, told me the empty house next door to her residence was much more economical than the cost of renting in Midtown. She was exuberant as she showed me around the facility and talked about plans to turn the attic into a space where artists could stay when they came in for events, instead of staying at a hotel.

The Detroit I grew up in had businesses — candy stores, churches and showrooms — tucked into residential areas. New Orleans has that now. You can be walking down the street in a neighborhood and suddenly there is an intimate little café. Detroit used to have that. That’s another little thing from our past that I would love to see embraced.

Not everything has to be on a major thoroughfare and throwing down millions of dollars each year. Economics of a smaller and more personal scale can take place. Things need to go on in neighborhoods, both cultural and economic activity. They don’t need to be only in strip malls or downtown where everything else is clustered. The neighborhoods are where people live. They should be able to do things there. Especially now that it’s possible to do your banking and all kinds of business online as well as telecommuting for some, having cool things to do or places to meet around the neighborhood keeps it vibrant and builds community.

While there I met a neatly dressed young man of maybe 13 years. He lived a few doors away and proudly told me about the arts activities he had taken part in. A few houses nearby had paintings on them that were in the vein of the Heidelberg Project — although this is nothing like that area.

Speaking of honoring Detroiters, there are three new photo shows focused on Detroiters who are making a difference. One of them is Detroit Resurgent, portraits of 64 Detroiters who are working to make the city a better place through business, culture, politics, ministries and other avenues, at the Michigan State University Museum. The range of subjects includes the likes of UAW President Bob King, gallery owner George N’Namdi, food activist Jess Daniel, urban farmer Patrick Crouch, artist Gilda Snowden and so many others. French photographer Gilles Peron was commissioned by the museum to shoot the photos in 2012. I guess full disclosure here requires me to say that I am one of the subjects in the exhibit and that I wrote an essay that accompanies these photos in the book Detroit Resurgent to be published by Michigan State University Press in April 2014. The show will be coming to MSU’s Detroit Center in May.

There’s a smaller show covering some of the same ground at the University of Michigan’s Lane Hall. “So You Say You Want a Revolution,” features Wayne State University photography professor Marilyn Zimmerman’s portraits of Detroit activists, such as the Hope District’s Michael Wimberly, WSU’s Dr. Melba Boyd and political activist Grace Boggs (who also appears in the MSU exhibit). This one is sponsored by U-M’s Women’s Studies Department, and the photographer is billed as “Zimmerwoman” for the show.

Not to be left behind, the Dell Pryor Gallery in Midtown opens a show this Friday titled “The Masters Collection,” featuring art that is in private collections. Many of those pieces are by Detroit artists such as Gilda Snowden, Ibn Pori Pitts, Shirley Woodson and Allie McGhee.

Even though these are tough times in Detroit, the creativity and ingenuity of our people is vast. Take some time soon to mine the cultural riches of our fair city.