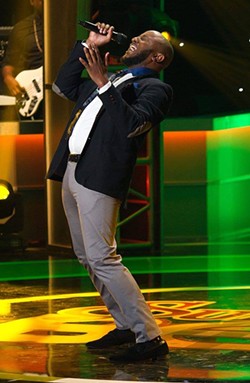 Just a heads up that Detroit native Clifton Ross III has ascended to the top ranks of BET's gospel competition show Sunday Best.

The former member of Detroit's Mosaic Youth Theatre is now a music teacher at Bryant Alternative School in Alexandria, Va. He competes against all of the show's previous contestants as part of the show's #SBAllStars season.

"Music has always been in me for as long as I can remember," Ross told The Washington Post last week. "I have a musical family — my mom sings, my dad and sister are musicians — and I grew up in the Detroit area with gospel music legends such as BeBe and CeCe Winans and the Clark Sisters. It’s in the water!"

Fans can vote for Ross daily through Saturday, August 29 by calling 1-855-422-1419 (up to 20 times) or an unlimited number of times online at bet.com/sundaybest. Voting ends on Saturday, August 29 at noon EST. The results will be revealed live on Sunday, August 30 during the show's finale.