You're really trying us Detroit News Editorial Board. A few weeks after publishing an incredibly poorly timed piece on how Emergency Managers work for cities, the News is at it again with another misguided and questionably sourced article.

On Monday evening, after 60 Detroit Public Schools were closed due to teacher-led sick-outs protesting deplorable working conditions and Lansing's impressively destructive role overseeing the district, the News published one of its predictably inflammatory editorials.

"Fire DPS strike ringleaders" the headline blared. From there the piece incorrectly noted ousted DFT president Steve Conn as the ringleader of the protests (it is in fact a grassroots group of teachers and is not union centered) and then proceeded to push legislators to "make it easier to punish teachers who break the law."

"[Darnell] Earley [DPS's State Appointed Emergency Manager who's last stint was running the show in Flint, where the water is now poisoned] has leeway under the emergency manager law, and it should be within his power to dismiss Conn. He should send out the appropriate notices to the organizers, and if they fail to comply and end their illegal actions, fire them," writes the News Editorial Board [aka a likely combination of Nolan Finley and Ingrid Jaques].

The story the News sets up is one where sneaky, delinquent teachers are playing hooky from school and putting their students' education in jeopardy. It's one that begs for accountability, but from completely the wrong people.

Instead of asking lawmakers to make it easier "to punish teachers who break the law," why isn't the News asking legislators to make it easier to punish state leaders and appointed emergency managers that fail to do their job? Wouldn't poisoning an entire city's water source and then sitting on that information be more enraging to the Detroit News than teachers taking a stand in what they believe in?

More specifically this "get rid of the pesky little people" approach — the little people causing a ruckus —  is just, well, dated. Lansing — and of course Earley —  is embroiled in trouble right now due to its dismissal of complaints from the "little people" in Flint, the people who took a stand when they felt like something was wrong with the water. When they knew — despite pushback from the "big guys" who said they just needed to  "calm down" — that something was not right.

It's sort of hard to differentiate between Flint and DPS. In both scenarios non-elected emergency managers are calling the shots and trying to quell any disruption. More importantly kids are being harmed. Unfortunately for the Detroit News' thesis, the harm is not being caused by those who they'd like to purport.

The Detroit News editorial perpetuates the misnomer that these 'sick-outs' are creating real harm for the education of the city's students. That a day or two out will be detrimental to their long term growth. This is insane. The real harm is in fact stacking 35-50 kids in a classroom and expecting them to learn. The real harm does not happen in one day, it's years of attending a district school without resources and supports.

We could go on about the injustices of the current DPS conditions (conditions that have been allowed to occur under a state run system, not under the teachers) but we think it would be best if the Detroit News heard this from an actual DPS student.

Floating around Facebook right now is the deeply moving account of a DPS grad, Dennis Black, who wrote about his experiences in a DPS school under emergency management. 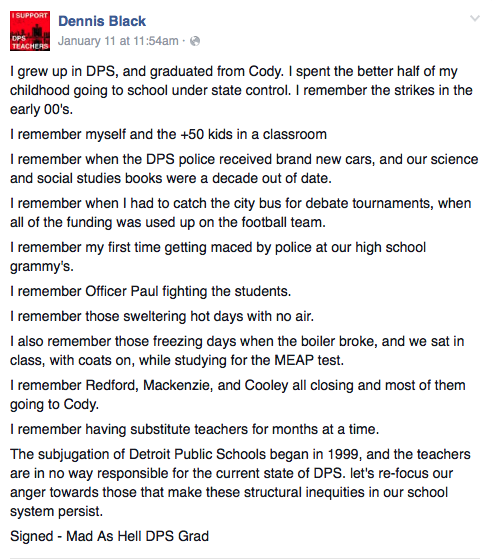 If this sounds like a place you want to send your kids Ingrid and Nolan, I think there are a lot of openings.

A particularly frustrating paragraph in the Detroit News editorial states the following:

"GOP lawmakers, who are in the middle of debating how to solve DPS’ growing fiscal problems, are not impressed by these teacher demonstrations. And it’s not going to make them more eager to send millions of dollars to Detroit schools. It also works against the teachers’ stated goal of calling attention to health and safety conditions in the schools, something officials should be examining and shouldn’t get lost in sickout backlash."

This paragraph is vexing for two reasons. The first, of course, is the question of why GOP lawmakers have to "solve" DPS debts to begin with. The following map created by Dr. Thomas Pedroni of Wayne State University and Karen Twomey who sits on the Ferndale School Board depicts the finances, enrollment and state's involvement in DPS between 1994-2016. The reality is many of the issues the teachers are protesting against have only worsened with the medling of lawmakers and multiple governors.

But here is the more irksome part of that Detroit News paragraph: It's wrong. The sick-outs are not hindering "the teachers’ stated goal of calling attention to health and safety conditions in the schools." In fact on Tuesday — the day after the Detroit News editorial came out — Mayor Mike Duggan visited a few DPS schools to check out the conditions teachers were taking a stand against. If you think Duggan's tour was coincidental, think again. This was a direct response to the sick-outs. Finally people actually listening.

When Duggan visited schools what did he see? Well, we think the Detroit News headline of the visit says it all: "Duggan sees dead mouse in ‘disturbing’ DPS schools tour."

The "sick-outs" are one part of a complicated and complex story about DPS, one that is rooted in history and deserves context. Detroit News Editorial Board tends to like one-source stories [ahem, Lansing] but we as readers should not accept this.