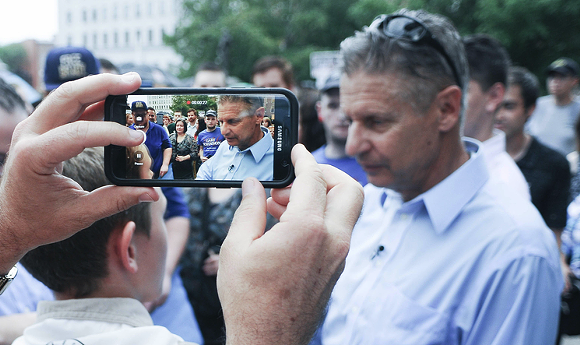 In case you missed it today, the editorial board of The Detroit News just endorsed Gary Johnson for president.

It’s kind of a big deal. Maybe it isn’t as big a deal as the Detroit News editorial board is making it out to be. Although they do have a point: Every time they’ve made a presidential endorsement, it has been of the Republican candidate, and that goes all the way back to when they were founded, back when some dude named Ulysses S. Grant was president.

At the same time, the News’ editorial board isn’t really leading on this. It’s reacting. It is reacting to the ugliness that is part of the Trump campaign, the xenophobia, the not-so-coded racism, the nativist chest-beating of his supporters.

Well, what did they expect? Republicans spent 50 years cynically using issues like race and class to divide Americans while making war and enacting policies that rewarded the rich and hollowed out the middle class. (The Democratic Party has pursued similar policies, but without half as much coded race-baiting. Vive le difference!)

It comes down to this: You can’t run a half-century of divide-and-conquer class warfare and then act all surprised when a blowhard who isn’t afraid to trade in the fears and anxieties of the white underclass rushes to the front of your parade. A generation of hardworking Republicans paved the way for Trump, from Haldeman to Hannity.

Of course, the News probably would rather we had a Republican candidate we don’t have: one who talks mostly about dropping the right bombs on the right people and pursuing an unswerving program of austerity, privatization, and international trade deals that sock it to American workers while protecting immortal corporations. The fact that the News has glommed onto the candidacy of Koch-funded, TPP-supporting Gary Johnson is indicative of their quandary.

For now, though, a lot of my left-leaning friends are making mirth of it. As in rolling on the floor laughing. Especially after Johnson couldn’t tell his MSNBC interrogators that Aleppo was a city in Syria, and how, on Hardball with Chris Matthews, Johnson couldn’t name a foreign leader he respects. One old chum told me, “Given the shitshow that is Trump, old Nolan Finley is reduced to backing a good-natured stoner who has cemented his irrelevance in this presidential contest.”

While that’s a funny remark, I’m not sure it’s all that fair.

Isn't life an open-book test? Do we want leaders who understand the general outlines of the world today, or do we want them to be able to barf up facts faster than Google? If so, why not just have quiz shows instead of elections? Besides, the average American probably can’t name the capital cities of 10 states, let alone a key city in the country their leaders seem determined to wipe off the map.

Besides, it’s silly to expect a candidate for the U.S. presidency to know the names of foreign cities and dignitaries. After all, doesn’t being president of the United States mean not having to understand the rest of the world? Isn’t that the point of being president? You use your military and the dollar to demand all the billions of people in cities and villages you can’t name have to understand you and not the other way around. Democrat Lyndon B. Johnson provided one example of that, but Republican Ronald Reagan’s act was harder still to follow: He seemed to know only what was on the teleprompter as he slipped the surly bonds of sanity to enter senility’s embrace.

But when it comes to the News board’s fondness for the Johnson, we were surprised by the closing message of the News endorsement: They believe that you are not throwing your vote away if you vote with your conscience.

Now that’s something we never thought we’d hear from the News editorial board. It gives us pause and makes us wonder if we heard them right. It can only lead toward one surprising conclusion:

They believe they have a conscience.