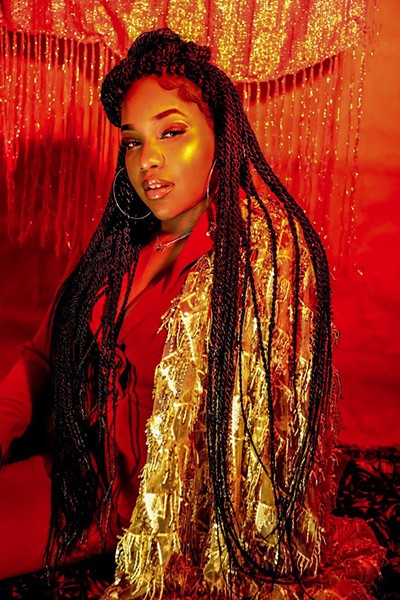 When Monalyse got a call from Pusha T's manager looking for collaborators for "1800 Seconds," a project with 1800 Tequila, she was a little pessimistic. They weren't the first to reach out scouting the Detroit MC for an opportunity of this magnitude. An audition opportunity had recently come from Rhythm + Flow, Cardi B and Chance the Rapper's Netflix hip-hop show, and yielded no results.

"I sent stuff in, and nothing happened," says Monalyse. "I was like, what was the point of even hitting me up? So when the Pusha T thing happened, I was like, yeah OK, here's another one. They told me to be on standby. They said, 'We looked at your stuff and we are about to do a background check. We'll get back to you if you made it.' I didn't get my hopes up."

Everything changed in an instant when she found out she made the cut. Two weeks later, she was flown out to Beverly Hills, California, attended a presentation by 1800 Tequila in a big Bel Air mansion, and began recording out of the same studio where Michael Jackson made Thriller to produce her single for the project.

The single "Me & My" is featured on a compilation album curated by Pusha T, with additions from nine other artists alongside fellow Detroit artist Sam Austins. Monalyse debuted the song in New York alongside Pusha T, and later came back to Detroit to do the same thing at an event at the Garden Theater in March.

During a studio session back in Cali, Monalyse recalls sitting down with Pusha T to play her new EP, Diligence, and other tracks from her music arsenal. Pusha T became a quick fan. "Monalyse is a poet," he says in a statement on the project website. "Like she's somebody, you listen to her records and you know that she's dialed in, super dialed in musically. But I could also let her stand in front of a stage, on a stage in front of me, and just say all types of poems and just see where her thoughts go."

The poet-turned-MC initially didn't intend on becoming a rapper per se. Though she was known for grouping words together in poetic stanzas at the age of 14 among her family, teachers, and peers, she says she didn't listen to mainstream hip-hop; genres like soft rock, R&B, and pop records were more her speed. Ultimately, though, she says hip-hop found her.

"I used to be in a room and just wait for lyrics to come to me," Monalyse says of the first time she sat down to write her first 16 bars. "Like, it would literally be no words on the paper, but I knew it was something. I would sit down and brainstorm raps. Nothing ever came, but I always knew it was something beyond me. As soon as the lyrics started coming out, it just made so much sense: 'OK, yes, this is what I'm supposed to do.'"

Those in her inner circle and beyond took a liking to her fluid transition between poetry and "cocky rap." Sometime within this period she began listening to hip-hop, but only to Biggie, who she says is much of the inspiration behind her flow.

As her lyrical senses began to develop, Monalyse went from rapping about being pretty to delivering what she calls "the Black girl gospel" through her lyrics.

As the storyteller spits a narrative often under-represented in hip-hop, she is also someone who encourages self worth with a dose of how to hustle. Diligence is a bold representation of this truth in tracks like "Dollar to a Dream," "I Do," and "Paranoid." A bulk of the music released is centered on not caring what anyone else thinks — still about being pretty, with a sprinkle of female sexuality and prowess.

Along with a powerful message, Monalyse's voice is quite unforgettable. Each bar spoken is delivered with a cadence comparable to Biggie, with the infectious tone of a pastor. Think Reverend Dr. Martin Luther King.

"Pastors demand attention when they talk," Monalyse says. "They stretch out their words, they get extra as hell, which I look up to."

Her voice embodies the juxtaposition of a Black mom. Her voice will sound comforting and encouraging one moment and then deliver something that sounds like a mom cussing you out for acting up in the store.

"My influence came from growing up and hearing different powerful Black voices," says Monalyse. "Mixed with my natural voice, it kind of just happened. So when I rap, I kind of have that demanding mother voice. People are like it's so familiar, but it's different. It's that mama voice."