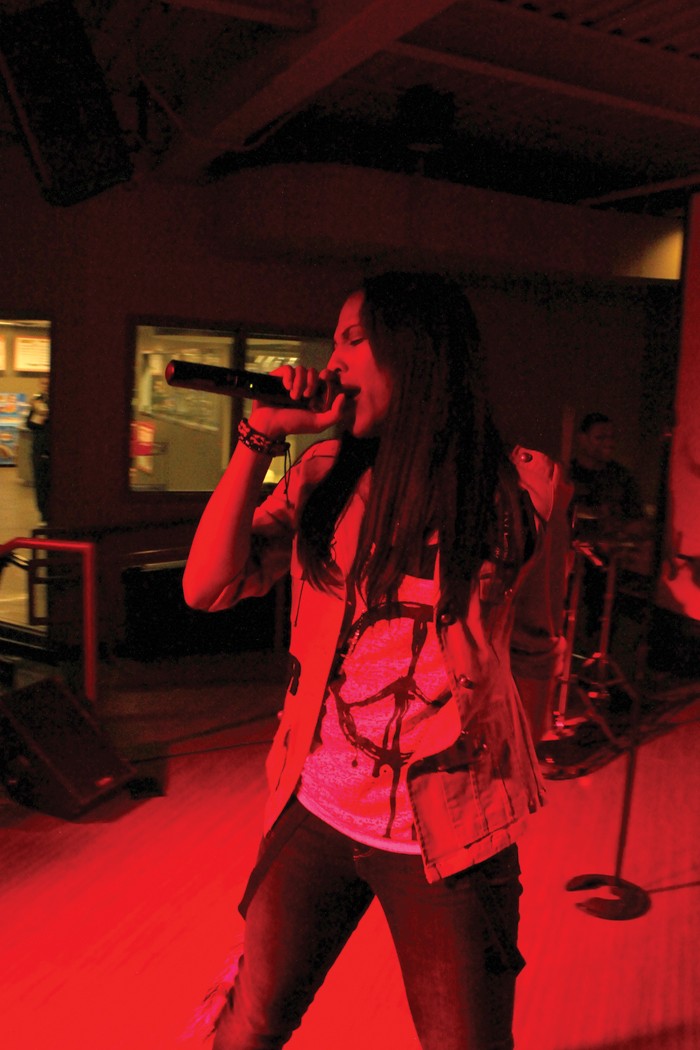 Nique Love Rhodes is a Detroit power woman with a driving rhythm. The 26 year old has rhymes and vocabulary that inspire. You might’ve heard her song “Rise Up” on the NFL channel during this year’s draft. We first heard her at Blowout a few weeks back, and we were blown away.

Metro Times: How did you get into music?

Nique Love Rhodes: I’ve always been creative. I’m an only child, and I didn’t have any brothers or sisters to annoy. I’ve always loved music. My dad was a DJ and did security for the clubs, so growing up I had a lot of music and Motown in the home. My dad played bass guitar, piano, and I later discovered would write songs. My mom was always encouraging me to be active. My dad got caught up in drugs and things like that, so since I was an only child, she gave me a notebook and told me whatever I was thinking to write it down. So I did. Then I got involved at church and started doing poetry at church youth groups.

I was at [Word of Light Christian Center], at a youth rally type thing, and I did a poem, and afterwards, someone came up to me and said you sound like you’re rapping. I said ok, and he said you should try rapping. I didn’t think much more of it, but a buddy of mine gave me a beat CD full of instrumentals, and I started writing my poems and they got longer and longer. I thought I could probably do this.

I’d have to sneak listening to hip-hop, because my mom didn’t like it. So I’d have to sneak with my cousin, and we’d listen to Tupac, Jay-Z. Nas, MC Lyte, Lauryn Hill and I thought I wanna do that.

I started studying songs and I’ve always been fascinated by how songs could bring back memories, so I started studying song structures and I had my first show at age 14 at U-Detroit Mercy, at open mic. I did an original rap and people liked it. And I thought this is great I’m gonna keep doing this.

I just recently went back to the church to perform at this youth program about substance abuse prevention. I still keep in touch with the pastor. He encourages youth to pursue their dreams. That was cool, to go back and perform where I started.

MT: How does that play in to what you do for a living?

NLR: My day job is I’m a case manager in Westland, where I work with teens headed down the wrong path. Some of them have had first time police contact: they got caught at school with pot, or they shoplifted, or they’re not getting along with parents, so instead of sending them into the juvenile justice system, they send them to us, and we do weekly peer group meetings with them, community service projects, different presentations and workshops, field trips and pretty much teach them basic life skills on how to be a productive young person.

It’s called Westland Youth Assistance. And that gives me the motivation to do the type of music that I’m doing. I’m very adamant about making the type of music that’s going to inspire people and put positive messages and energy in to the world. My job definitely keeps me focused on that. I see how much of an impact it has on kids, especially hip-hop. It helps keep me in check to put out the best music that I can, so that they hear it. I want them to get something from it.

The main thing that influences my music is being socially conscious and inspiring people. That’s the crux of my music. Every song is gonna inspire you, or make you think about what’s going on. Those are my two goals. Everything I do—That’s the core. I’m inspired by how music impacts people. Even though he gets a lot of flack in hip-hop, I look at artists like Kanye West. Everyone knows a Kanye West song. I mean Stronger, it’s such an anthem.

Another song that became an anthem was that Pharrell Williams song Happy. They were playing it for cancer patients. That song made people who were depressed feel good. Even If you look at Michael Jackson, the songs that he made, made people feel good.

That’s what I wanna do—make songs that make people feel good.  Connect with memories and emotion and things like that.

MT: You bring up Kanye right away…

NLR: Well yeah, I don’t agree with all of his tangents. Sometimes I’m like, ok dude, relax. But when his first album come out, College Dropout in 2004, that album was amazing to me. He was talking about stuff that was going on in Chicago, but also things that I identified with as a young person born and raised in Detroit. He was one of the first rappers I’d heard in a long time talking about something other than gang banging and violence. He was just himself. I said, hey, I don’t have to talk about these typical hip-hop urban things. I can talk about spirituality and I can talk about school and all of these social issues and things that every day people are experiencing. I can talk about my family.  He made that cool again, for my generation.

NLR: I’m not a Kanye hater. He gives great hip-hop shows performance wise. The production behind that. I aspire to that. One day I wanna be that. I can’t be a hater.

I mean, him as a performance artist. Few hip-hop artists did that. Now, you can do elaborate stage set-ups and make an entertaining production behind the music.

If I had the money I’d be doing the same thing.

MT: You better get that money. Tell me about the NFL thing.

NLR: [Laughs] The NFL thing happened by happenstance, being prepared and being ready. I was at an event raising awareness of sexual abuse and sexual assault, and I ran into a friend of mine who I went to high school with. He saw me perform, and was happy I was still performing. He said he was doing sports journalism out in New Jersey.  I didn’t think much of it. Then, two days later at a Lupe Fiasco concert, I ran into him again he asked me for upbeat tracks so I sent them and didn’t hear back. This was in January. And then come March I get and email from the NFL saying they wanna use Rise Up in one of their shows. He emailed me like two days later and said he’d sent my music on to some people, and he wanted to know if I’d heard back, and I was like yeah, NFL network just called me.

My mom is a huge football fan, “Oh my gosh my baby’s on NFL network!” It was really cool to hear my song on a big time network like that.

MT: Did they license it for the future or the fall?

NLR: No they just used it for that one show. But you never know what that opportunity will turn into. Being an independent artist you never know what opportunities will turn in to something else. It was a good launching point, that taught me about licensing and the business behind it.  So I hope to do more. It motivated me. Now I’m like let me pitch some songs to some people, that’s what I’m working on now, getting a target list of companies to reach out to.

NLR: Absolutely. You know, have love for the big guys.

MT: A lot of people go to corporations at the end of their career when they need money, but it seems a lot of Detroit artists go that route first.

NLR: It’s a different time for music. You have to be business savvy, creatively. Record labels aren’t signing new artists quickly, and if they do sign you, there’s a very good chance you’ll be another shelved artist, controlled.

A lot of artists are saying I gotta find creative ways to make income from this, so they go to the companies. You see that more and more. I think it’s good business. It makes sense.

MT: How is it being a positive woman in hip-hop?

NLR: Being a positive woman in hip-hop has a ton of power, especially now because there are so few, especially on the commercial level. It’s needed and people don’t expect that anymore. Why aren’t there more women rappers saying something of substance? It’s so needed. People are ready to hear something more. We haven’t heard that powerful presence since Lauryn Hill. And it’s missing and society is ready for it.

I think the problem is that when it comes to being commercial, labels back the artist and have the money to keep them in the public spot light, and because the format of what sells is Lil’ Kim, Nicki Minaj… it’s a format that’s been working.

These are corporations who use music as a product. They wanna stick with what they know will make them a profit.

Women are the foundation of the earth. We birthed the entire race.

Yes it’s the corporate business side, but it’s profit and prostitution. I don’t listen to the radio. The quality of the music is just not good. Then you add the poor content, I listen for 5 minutes and I feel like I lost brain cells, I just don’t support it.  I cannot stand music that promotes anything detrimental. It’s got to stop. Who cares if you have a record deal? You’re destroying your community and you’re destroying your city.

We can change the landscape of all that’s wrong with society if we just stop looking at stupid stuff. We can change the world. We have everything we could possibly need to change our society. And even when it comes to music entertainment. If we don’t want this anymore, stop going to the concerts. Stop listening to the radio stations. Stop buying and downloading the music, and they will have to change. All they care about is sales. It’s insane. Don’t listen to it. Don’t buy it. And you’ll force them to change

I’m an optimist. It’ll happen. It takes more people to speak out about it. We all have the ability to change our communities, our societies, and the world.

Nique Love Rhodes will be at the Detroit Institute for Music Education July 24. To learn more about Rhodes’ music, see iamNLR.com.