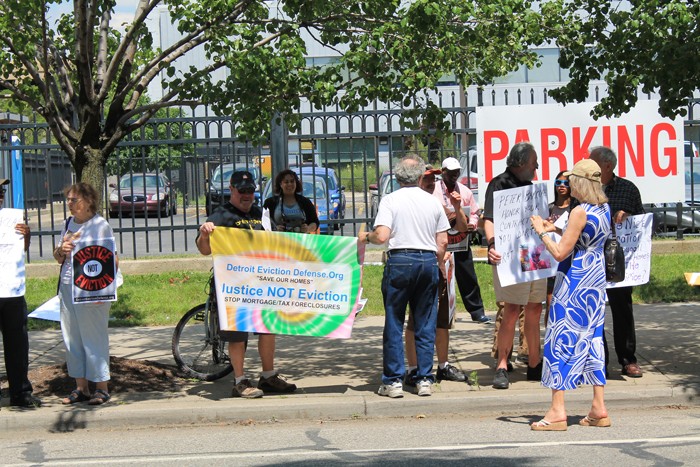 Standing on West Grand Boulevard last week, Detroit resident Sheree Bass held up a sign that said, “Stop the racket. Pay the taxes.” Underneath the phrase, she had taped a copy of the Wayne County tax statement for the home she’s lived in for years. Total amount due: $7,939.11

The problem, Bass says, is she doesn’t own the home located near Eastern Market. It’s actually owned by Oakland County developer Peter Barclae.

Bass is currently locked in a legal battle in Wayne County Circuit Court, along with a dozen other Detroiters who say Barclae is trying to sling homes they should’ve owned by now. Barclae, of West Bloomfield Township, contends otherwise.

“He hasn’t honored the contract — the purchase agreement — for the last seven years,” says Bass. “He wouldn’t sell still to this day.”

The tax dispute is, in part, why some residents stopped paying rent in the months leading up to the case being filed, according to their attorney, Vanessa Fluker. Once it became apparent the houses were potentially subject to foreclosure, residents say it was unclear who actually held the title to properties of the so-called Gratiot McDougall housing project.

Barclae’s attorney, Allen Dyer, told Metro Times last month the residents owe “approximately $200,000” in back rent, according to a report from a court-appointed receiver. He says if that was collected, it would ensure the developer wasn’t “behind on taxes.”

The story, at times, is hard to follow, even for the slowpokes at News Hits HQ.

As this rag previously reported, what appears to have led Barclae’s tenants to sue him was a collapse in the funding his project depended on, with almost half of the federal money he anticipated never materializing due to program requirements not being met by the city of Detroit, according to court records.

Barclae built the 18 homes in the Gratiot McDougall project back in 2006. To fund the estimated $3.4 million project, he tapped financing with Charter One Bank to supplement federal grants from the U.S. Department of Housing and Urban Development’s HOME program; those grants would be administered by the city of Detroit. Along with the HUD funds, “the mortgages the tenants were supposed to get were to pay off the Charter One loan with the tenants ultimately becoming the owners of each property,” according to Barclae’s attorney, Dyer. Five of the buys eventually signed mortgages on the properties they wanted to buy. Barclae guaranteed about 58 percent of the loan from Charter One, the HUD HOME program would cover the rest, according to his attorney. But, as Metro Times reported, the city failed to meet requirements of HUD’s HOME Investment Partnership Program to administer the funds, so the feds pulled the project’s financing.

This is where this complex mess of a story takes several different turns.

After the housing crash, most, but not all of the residents, also signed an additional purchase agreement, requiring them to obtain a mortgage to complete a purchase of the home.

“The purchase agreements typically required the buyers to obtain a mortgage in 90 days, but some had terms of up to a year,” Dyer says.

Dyer says the prospective buyers moved in under what was “essentially … a lease option to purchase” agreement, with rent payments on average between $750 and $850, “as a temporary measure.”

In addition, he says, “the lease also included language stating the buyers were to obtain a mortgage and in the meantime they were to pay rent on a timely basis.”

Except, the families suggest in court filings that Barclae may be the reason a home was never closed on. They were told “that they were approved for residential mortgages and that they ‘would be closing at any time,’” Fluker wrote.

As Metro Times reported, it’s unclear where that indication from the company stems from. A 2009 lawsuit between Charter One and two Barclae-affiliated companies does cite such a scenario involving the banking institution.

According to an unpublished opinion from a three-judge state Court of Appeals panel, Charter One sued to recoup the outstanding balance of its loan with those firms. The panel shot down the Barclae affiliates’ claim that Charter “fraudulently represented to defendants that it would finance potential buyers of defendants’ homes,” adding, “There is no language in the loan agreement [with Charter One] making repayment contingent upon financing for potential homebuyers.”

Barclae eventually settled with Charter One, and soon after attempted to evict the homeowners, but those proceedings were halted after the current case in circuit court was filed in February. The outcome will likely depend on the judge’s determination of whether the language of the contracts those residents signed legally holds up — and entitles them to the deed of the homes. A review of purchase agreements disclosed in court show contract terms varied home-to-home, some of which state Barclae “made no representation … as to the availability of financing” for homes, while others don’t.

Resident Antoinette Talley says she and others should absolutely be sold the homes. She tells News Hits they were all sold on a homeownership program, not to simply occupy the Gratiot McDougall properties as renters. And, she says, each resident spent time essentially designing the homes — everything from carpet to aluminum siding.

“You don’t do that for renters,” she says, adding, “These homes were custom-built for us.”

Talley was joined by the rabble-rousers of the Detroit Eviction Defense — which consists of homeowners, community activists, local unions, and faith-based organizations — outside the parking lot of the St. Regis Hotel, another Barclae-owned property. The demonstration followed another last month, when residents successfully lobbied a Singapore-based developer, Midas Development Corporation, to remove the homes from a sale listing on their website. Midas had signed a purchase agreement with Barclae, paid a deposit, and was moving toward closing on the homes, until litigation was filed on behalf of the homeowners.

The case will continue to unfold later this month.

On Wednesday, Dyer filed a motion for a partial release from an escrow account that was established last month, which residents will pay stipulated rental fees into until further notice. A hearing on the motion is scheduled for July 25, in circuit court before Judge Leslie Kim Smith.