Detroit's 'Fuck Trump' graffiti pieces will give you hope

Donald Trump's first year in office has been a whirlwind, to put it in the kindest of terms.

It's so hard to keep up on the deluge of news coming out of the White House that a quick reflection is in order: There was Trump's attempted ban on travel from predominantly Muslim countries, the protracted effort to dismantle the Affordable Care Act, the plan to bar transgender people from serving in the military, the excuses for white supremacists, the nuclear brinkmanship with North Korea.

And of course, those are just the greatest hits — the short list overlooks the B-sides that make a compelling case that the most powerful man in the world is a narcissist with dementia. Last week, Trump got in a Twitter feud with LaVar Ball; this weekend, word came that Trump had claimed the "grab-'em-by-the-pussy" Access Hollywood tape was fake.

Through it all, Americans have found various ways to cope, from tuning Trump out to embroiling themselves in their own social media battles — with friends, family members, and even complete strangers. In Detroit, meanwhile, a select few have channeled their rage a little more creatively, spewing vitriol through a can — or fire hydrant — full of spray paint.

Inside Detroit's merciless graffiti crackdown
Three years in, Mayor Mike Duggan's war on graffiti has yielded more than 50 arrests and $1.2 million in fines
By Violet Ikonomova
Detroit News
The "Fuck Trump" graffiti pieces that dot Detroit have done much to lift our spirits over the course of this year. They serve as a reminder that if you don't cross Eight Mile to the east, you'll manage to stay in a sort of safety zone where people do not align themselves with xenophobic and misogynist sentiments. After all, 97 percent of Detroit residents voted against Trump last November.

Below, you'll find a handful of "Fuck Trump" pieces that appeared in Detroit in 2017. The buff man is quick to cover up graffiti these days, so you may only get to enjoy the art in photograph form. If you happen to stumble upon a "Fuck Trump" in the wild, please consider snapping a pic and sending it to us before it's gone. 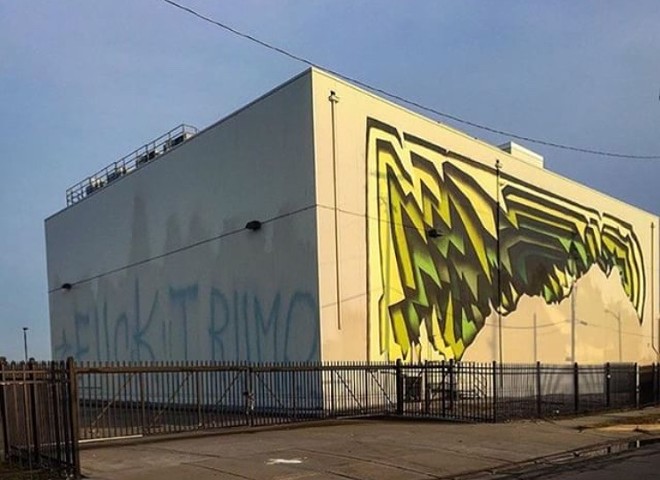