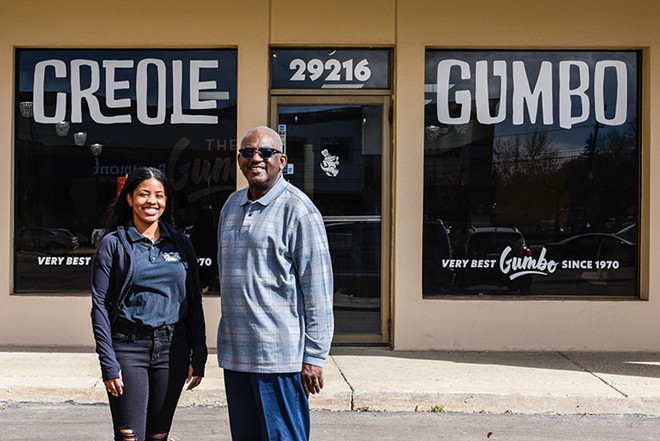 Joe Spencer, president of Louisiana Creole Gumbo, says the restaurant will be carryout-only until the COVID-19 pandemic subsides. Once they offer dine-in seating, it will be able to seat up to 30 people.

For more than 50 years, Louisiana Creole Gumbo has served its signature creole, gumbo, jambalaya, red beans, meats, rice, and more to the Detroit community. "As far as the food, we'll be serving the same menu," Spencer tells Metro Times. "We'll probably have one or two more vegetarian dishes because we understand there's a large vegetarian community out there."

Louisiana Creole Gumbo's history goes back to 1970. The restaurant's original location at 2051 Gratiot in Detroit was previously known as Luzianne Creole Gumbo and owned by Margerine and Joseph Stafford, who learned to cook from his mother in a town outside of New Orleans town called Bayou Lafourche, Louisiana.

Spencer says Stafford directly gave him all of the recipes, blends, spices, and traditions to help them get a good start, which the restaurant still uses to this day. "He (Stafford) spent an entire year after he sold it to us coming to work every day to show us to make sure we knew how to run a business," Spencer says. "All of the vendors we used, just how to blend spices, just how to prepare everything — he showed us everything."

Popular dishes include red beans and rice with various meat choices such as sausage, shrimp, chicken, or quinoa as a vegetarian option. Creole dishes include seafood, chicken, shrimp, cajun shrimp, or sausage. Their signature New Orleans-style gumbo has okra, onions, and tomatoes, with your choice of chicken, shrimp, seafood, or a combination of all meats, while the Jambalaya is a spicy rice dish mixed with peppers, onions, chicken, and cajun beef sausage.

Louisiana Creole Gumbo also offers Southern dishes and sides such as the Po' Boy sandwich, fried catfish, baked chicken, barbecue chicken, macaroni and cheese, candied yams, collard greens, rice and gravy, and more. You can top these off with their fresh-squeezed lemonade and 7-Up pound cake.

Spencer says his daughter Stephanie, who currently manages the restaurants, will take ownership of the company once he retires. It's truly a family business; his son and brother also work there.

"Stephanie is going to be our next leader of the company," Spencer says. "Of course, she'll have ownership through me and through our family. When I retire, she's kind of like the designated person to take over, and she's kind of learning that role now in terms of what it takes to be the manager and taking on that responsibility."

Spencer says Stephanie will maintain the restaurant's recipes and traditions, which are almost 100 years old. He says she may change some things and add some things to the menu, but the fundamentals will remain the same.

"People say our food is soul food — it's not soul food," Spencer says. "It's Creole food, and it's Southern food, but it's not soul food. We don't use a lot of grease in our food, we don't put fat meat in our products, we don't do a lot of frying. The only thing we fry in our store is catfish."

"Personally, I feel that this is a gift from God to me," Spencer says. "The reason I say that is this: I never intended to be in the restaurant business."

In the future, Spencer says he wants his business to eventually expand to other counties, towns, and even to other states.