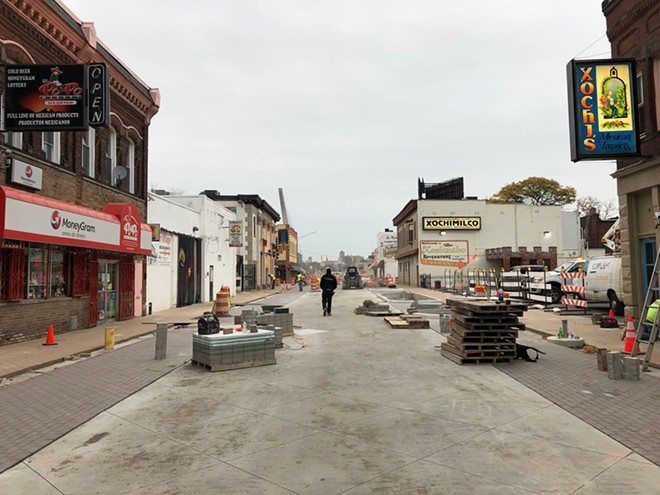 Mexicantown is set for a radical transformation when its $5.4 million construction project finally wraps up. A rendering printed on a sign near El Zocalo restaurant imagines a diverse array of Detroiters enjoying a pedestrian-friendly plaza with lush new landscaping and lights strung overhead — "like Greektown," one of the waitresses explains on a recent visit. In the past few weeks, workers have begun laying down brickwork for the plaza's unique curbless design, which features a light brick sidewalk and a darker brick parking lane.

But for now, the typically bustling Bagley Street thoroughfare is all torn up. Shoppers have to navigate around workers, orange barrels, construction equipment, and the unfinished brickwork, with some pathways completely cut off. On a recent weekend, cars had to shuffle to enter a shared parking lot behind Evie's Tamales, and the intersection of Bagley and 24th Street was a pit of mud covered in snow.

Mexicantown's makeover is part of a larger $80 million bond-funded project to transform commercial corridors around the city with new pedestrian crossings, bike lanes, lighting, plants, and decorations. In a city where the government has been accused of steering development to its whiter, corporate-dominated downtown at the detriment of its other neighborhoods, the projects are a welcome investment to many residents — tangible proof of Mayor Mike Duggan's campaign promise that "every neighborhood has a future."

But some Mexicantown business owners say they're frustrated with how the city has handled the project so far. Construction was originally supposed to start in May, but the community objected on the grounds that it would interfere with the neighborhood's biggest festival, Cinco de Mayo, and all the end-of-the-school-year field trips to the area around that time. Then, due to a number of delays, including rainy weather in the spring and summer, the project didn't really get underway until August, and has since disrupted Día de Muertos festivities.

"October is [usually] my second-busiest month of the year, after Cinco de Mayo," Gloria Rosas Baiocco, co-owner of Xochi's Gift Shop, says. "But I definitely saw the hit in October."

As with its other streetscape projects, the city has tried to help businesses weather the construction by designating parking lots and erecting special signage reminding passersby that the businesses are still open. The city held feedback meetings before ground broke, and has distributed postcards with the government liaison's phone number. A website, detroitmi.gov/streetscapes, offers updates and other information.

"They've been working every day, and things are progressing very fast," Baiocco says, noting that the city even recently sent a crew to make a video promoting her store to post on social media. Still, Baiocco feels like there was a disconnect between what the city promised and the reality outside her door.

"They made things seem like they were going to be a little bit more organized than they were," she says.

Baiocco says she believes the hurt is compounded by nearby construction projects on Vernor Highway and Clark Street going on right now. Caitlin Malloy Marcon, the city's deputy director of the Department of Public Works, agrees that perhaps it would have been better to stagger the different Mexicantown projects.

"I guess hindsight is 20/20, and we should have included that as part of the community engagement, to ask if they'd rather endure construction over multiple years as opposed to one," she says. "But it was always the plan to do them at the same time. Whether or not we would do it the same way if we started all over again, I can't speak to that, but that could be part of the community engagement moving forward."

The frustration expressed by the Mexicantown business owners echoes those of others impacted by the city's other streetscape projects. Businesses and residents along the historic Livernois Avenue of Fashion staged a protest in August, saying the $17 million streetscape project is choking off the community. The Avenue of Fashion is the highest concentration of Black-owned businesses in the city. (In response, the city announced a loan program to help businesses stay afloat, but some business owners were hesitant to spend money after losing money.)

On Grand River Avenue, chef Maxcel Hardy, one of the city's most celebrated Black chefs, says the $8 million construction project was "the nail in the coffin" that caused him to close his restaurant, River Bistro, in September. Earlier this month, the nearby Town Hall Caffe' started a crowdfunding campaign to stay afloat.

Diana Cooley, owner of Evie's Tamales, says construction has caused her to cut her hours. "My customers got used to driving up to the front of the door," she says. "We're here at 4 o'clock in the morning, so we get all the construction guys or people that are trying to get to work. Now there's no place for anyone to park."

The city says it hopes to "significantly complete" the project this year, and will return in the spring to finish the landscaping. But Cooley is skeptical that construction will be completed anytime soon.

"Now we're going into Christmas, and Christmastime is for tamales, and that's what my specialty is," she says. "That's my busiest time of the year."

Fernando Garcia, a truck driver from the community who stopped in to Evie's to order breakfast before heading out on a job, says he's glad to see the investment, but concerned about who the future of these neighborhoods belongs to.

"This kind of thing is excellent for the community," he says. "But when you've got people coming in with money and they're buying these houses and the properties for cheap ... they're bringing up the rents, man. It's like, come on, you know what you're doing. You're pushing out people. What kind of community are you going to have left? You're going to call it Mexicantown without Mexicans or Latinos?"

Raquel Lozano, owner of El Popo Market, agrees business has slowed down during construction. She's also looking forward to the completed project — she says it's the biggest investment she's seen in Mexicantown since she moved here from Mexico more than 20 years ago.

"Some people complain, but I say every change is hard," she says. "Every change in your life is hard."