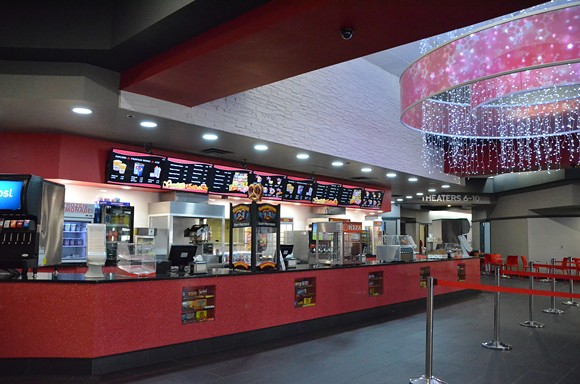 Sad but true: Detroit, the most populous city Michigan, has only one first-run movie theater. Sure, you can catch great independent and foreign films at the DIA's Detroit Film Theatre or Cinema Detroit, or catch golden oldies at the Redford Theatre. But with the closure of the Renaissance Center's Ren Cen 4 last year, Detroiters wanting to catch, say, Bad Santa 2 on opening weekend are limited to one lone theater — or a trek to the 'burbs.

The good news is that lone theater, Bel Air Luxury Cinema (10100 E. 8 Mile Road), has been completely remodeled to compete with those suburban theaters, with new seating and revamped concessions.

The redesign of the 1,200-seat, 10-auditorium theater comes from Madison Heights' D|Fab Designs, and includes spacious stadium seating with powered leather reclining seats, a custom chandelier, and a new concession stand. As far as concessions go, the theater now has café-style seating with a menu that features homemade pizza and White Castle. The auditoriums are equipped with digital projectors and Dolby Digital 7.1 surround sound.

“It is exciting to see all of the development going in downtown and midtown, but what about the neighborhoods?" Bel Air's general manager and partner Johny Thomas says in a press release. "We wanted to show the neighborhood communities in Detroit that we care by reinvesting in the neighborhood. We are hoping not just for a return on investment, but a return on community."

Check out some photos below: